Byrd Williams IV, whose photographs are currently on view at Fort Works Art, is the fourth-generation scion of a family of Fort Worth photographers. His great-grandfather, grandfather and father all pursued photography, although it was his father, Byrd III, who was the first to become a full-time professional photographer. Byrd IV says he did not have a choice, but became involved in the family business as a young man, and has continued his family’s photographic legacy. He’s the former chair of the Photography/Graphic Design department of Collin College, where he has taught photography for 29 years. Roy Flukinger’s foreword to Byrd Williams IV’s book PLACE: Photographs from Four Generations of a Texas Family describes the Williams family as having “a serious affiliation to place combined with an inherent faithfulness to witness in a more universal manner the people and the cultural change that have transformed that place.” 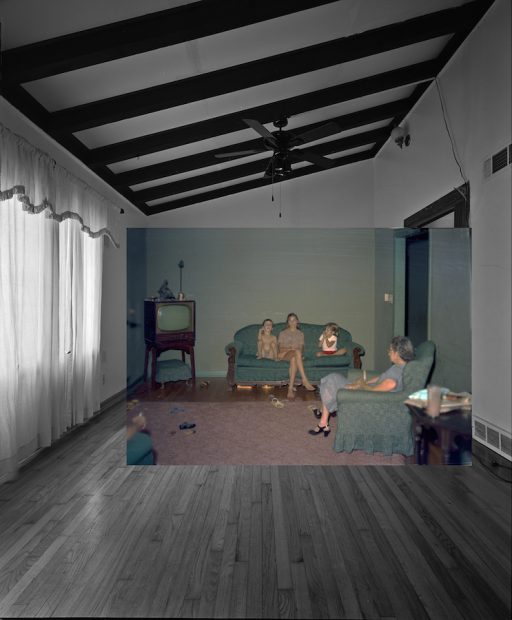 The exhibition of 33 photographs currently on view at Fort Works Art were selected by Byrd IV and provide a synoptic view of his photographic output, beginning with his earliest photos, taken before he was 10 years old, and ending with the grimly reflective recent series titled Family Mortality. More significantly, his curated selection of his work represents his personal walk back through the history of his life, his family’s lives and their deaths. The image Pompeii seems illustrative of his recent frame of mind. Byrd overlays a family photo from his childhood over a contemporary interior photo of his childhood home, and includes his written commentary at the bottom of the sheet: “We grew up right there. Right fucking there. Fights, mirth, vomit, all of it. I went back 60 years later and it was like walking into Pompeii.” 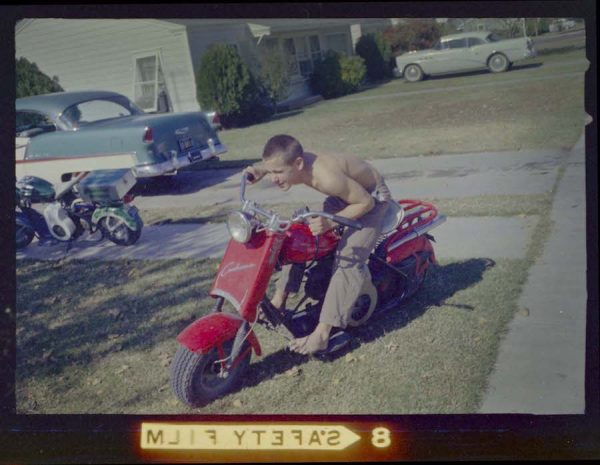 The earliest photos in the show were taken by Byrd IV in the 1960s, and show his friends fighting and playing with guns and dolls. He now looks back at these documents of his early life for clues to the future lives and occasional early deaths that his childhood friends and acquaintances would experience, as in Neighborhood Car Thief, a portrait of a boy sitting on a motorbike who was notorious at the time as a neighborhood bully. The title suggests that the boy moved on to some delinquent pursuits. 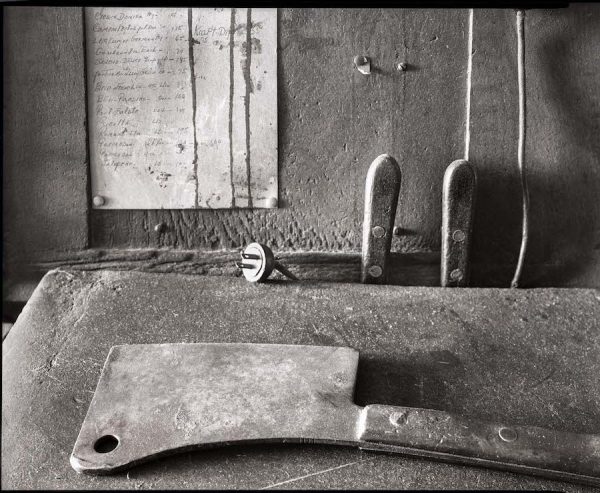 In much of Byrd IV’s output, objects help tell the story, as in Meat Cleaver at Turner Dingee, in which the worn cleaver, knife handles, a plug, and the stained list of cheeses and thumb tacks on the wall are suffused with soft light in the gold chloride print. This simple still life effectively recalls the earlier time of the oldest grocery store in Fort Worth and its employees, also depicted in his well-known portrait of grocer Lloyd Hallaran. 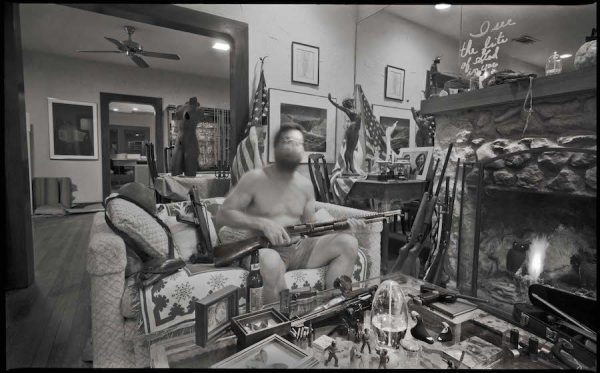 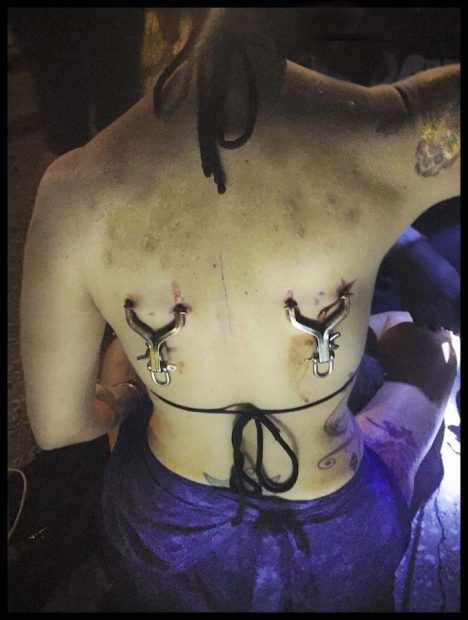 In a series of gun-related images, Byrd photographed several individuals who had been shot but survived. When photographing a man who had been shot while hitchhiking — I See the Lite of God in You — the photographer thought the objects in the house were as interesting as his subject’s scars, so he retrieved a shot-up manikin from the man’s backyard and laid out other disparate oddities, like the man’s gun and butterfly collections.

The most recent photograph in the exhibition, Hanging Hooker, through cropping, fetishizes the hooks, dried blood and fluid staining the nude back of a woman following her “suicide” hook suspension. Byrd IV explains that the title is the name that a group of local female suspension practitioners give themselves in jest. 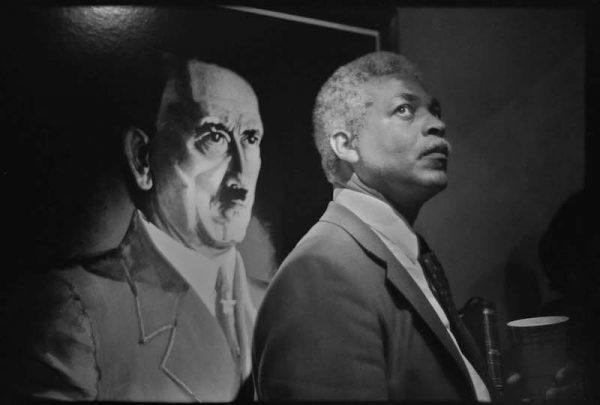 Byrd IV’s series on Fundamentalists documents both the people and the theatrics of televangelism. A bizarre juxtaposition occurs in the photograph of Ben Kinchlow, as the former co-host of the 700 Club stands with a framed, lurid picture of Adolf Hitler glaring at the back of the televangelist’s head. The title in the exhibition check list suggests this was taken at the 700 Club, but Williams’ book PROOF identifies the situation as occurring at a Holocaust symposium at a Messianic Judaism Church in Euless, Texas, which seems even more surprising.

Byrd photographed in Europe during his artist residency in Bad Ems, Germany, and his resulting series of triptychs, such as Trier Triptych, documents civic spaces and street corners in Germany, France, Belgium and the UK, and were exhibited in West Germany. While working on this series, he also photographed an eerie Neo-Nazi doll collection shown in a mural-sized print large enough to show off the doll’s bad teeth and glowing blue eyes.

Byrd combed through several generations of his family’s papers, letters and photos while researching his book, before turning over these materials and the rest of the Byrd photographic archive to the University of North Texas Special Collections Library. That experience and putting images of family members into folders caused him to wax reflective about his family members’ life stories in his bleakly frank series called Family Mortality, which includes post-mortem photographs of his father and his sister, among other family photos of his grandfather and his older brother, who was killed in a confrontation with police in Connecticut. These are presented as image triptychs that combine a childhood photo with the person as a young adult and then a third photo near or after death. My Twin depicts his sister Pam’s abbreviated life in a sequence of three images with his terse explanation at the bottom: “Ovarian free fall… Pam’s entire life is in a folder now. From that moment in 1957 when she stepped up on a bicycle basket to salute me in her new dress until that moment in 2014 when she laid on the couch and quit breathing.” 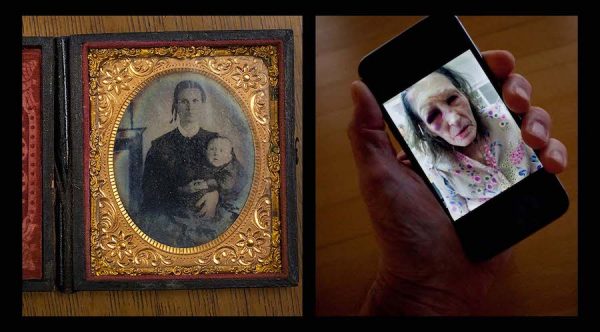 A final wrenching image pairs a family Civil War-era ambrotype of an unknown young mother and child with an iPhone photo of his mother’s face, ravaged by age and Alzheimer’s. For Byrd IV, reminiscences are not easy, but photographs provide a key that unlocks memory and helps us to understand our own mortality.

Through February 3rd at Fort Works Art in Fort Worth.