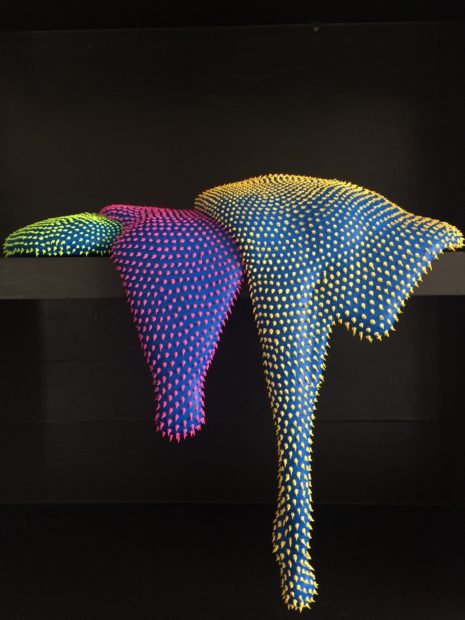 For a population so recently obsessed with Pokémon GO, it’s not surprising that Dan Lam’s cartoonish sculptures find a receptive audience wherever they turn up. As a sort of welcoming committee to the crowd at Fort Works Art on a recent opening night, dozens of the prickly amoeba-like sculptures lounged on chair cushions, dripped from walls and ledges, and looked squishy, viscous, spikey, and a bit naughty. They have a repellant yet appealing edge. 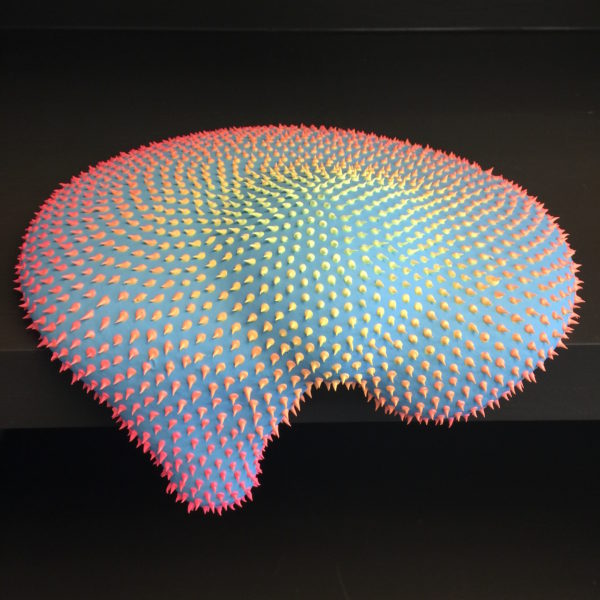 Coquette is an apt title for Lam’s show. Ranging in size from minuscule three-inch-diameter wall crawlers up to 50-inch-long ‘danglers,’ Lam’s electric colored blobs seem to nearly cavort around the gallery, like mutant chia pets. They have an unmistakable anthropomorphic quality as they slide down walls or slouch on shelves. A couple of ‘drippies’ are perched on pedestals and feature Lam’s name in pastel colors; several others are set off against an elegant black background, and some are even imbedded with… rhinestones. The show’s organizers exploited the wittiness of these creatures in the installation; they even appear to be climbing over a wall to invade the upper gallery space. Yet their initial appeal to invite touching is countered by their off-putting spikes. To achieve this extreme texture, Lam uses a cake decorating tip with a bag to pipe tiny spines of colorful acrylic paint all over each piece in radiating patterns. Her use of a new kind of squishable foam material debuts in this show as an experiment. One drippy example was set out on a pedestal with a sign that encouraged visitors to touch it—partly to gauge its ability to hold up to rough handling. 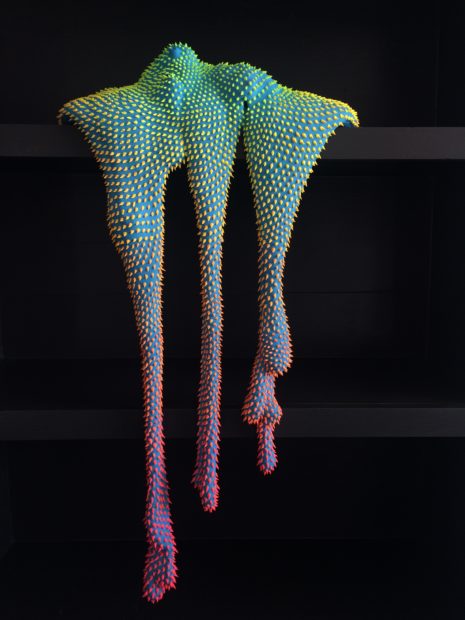 Lam, who lives in Dallas, was invited to be the first artist to make work on the premises of Fort Works Art, and she spent eight weeks there prepping for her show. A video by Mika Mitchell posted on the gallery’s webpage documents Lam’s creation process during the residency. Lam begins each piece with a core armature to give it a ‘body,’ then makes multiple pours of polyurethane foam, working with gravity as she extends and builds up the form and its drips. Brightly colored acrylic paint is successively poured over the forms. Acrylic spines in colors contrasting with the base are then sprigged onto the final surface. If Lam wants a glossy finish, she pours a final coat of translucent resin over the piece. 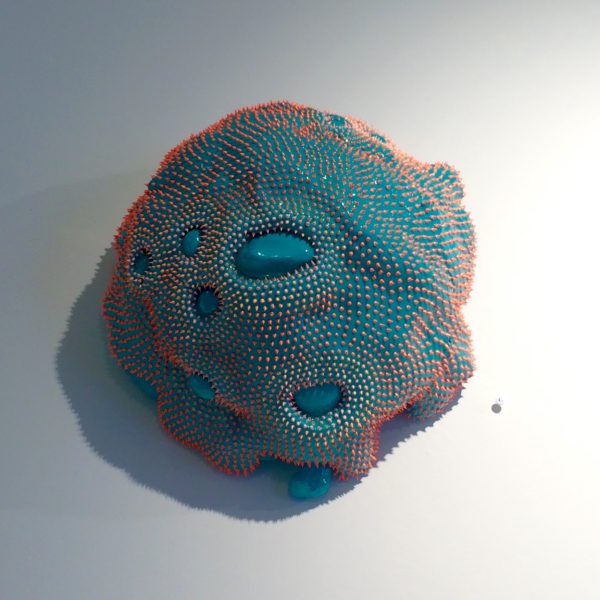 After completing her BFA at UNT, Lam started working with foam and resin when she began work on her MFA at Arizona State University, abandoning heavier materials like plaster and hot glue. Lam acknowledges the clear influence of artist Ken Price; Price’s organic forms with their sophisticated colored surfaces are Lam’s most direct inspiration. Price (who died in 2012) primarily worked with clay, however, so Lam’s polyurethane foam links her technique almost as closely to Lynda Benglis and her famous series of poured foam sculptures. Rather than creating ponderous masses, however, Lam’s lithesome, smaller-scale pieces give a more immediate sense of a living entity that’s in motion. Lam also creates blob-like wall pieces with viscous, shiny matter expanding through an outer prickly layer of ‘skin.’ The intensely physical aspect of these wall pieces shares an aesthetic connection with the overt physicality and sensuousness of Marilyn Minter’s paintings and videos. You can almost picture one of Lam’s creatures crushed under heel in a Minter Smash video. 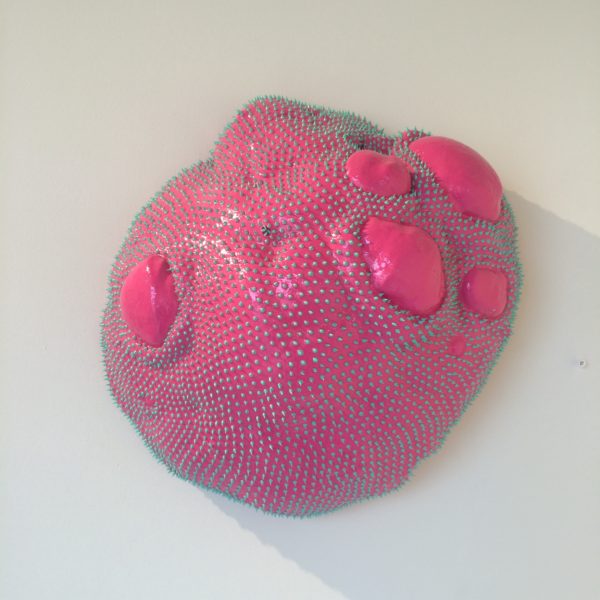 The popularity of Dan Lam’s work has soared recently due in no small part to the artist’s presence on social media. The subject of numerous Pinterest pages, Instagram posts, blogs, etc., her work has captured the interest of a varied and far-flung internet audience; the work reproduces well on a small screen. As of this writing, the 28-year-old artist has nearly 83,000 followers on her own Instagram account, and around 70,000 of these started following her since January. Whether you think the work is worth all the attention, the public has always been attracted to the idea of alien and exotic life forms, and some of Lam’s sculptures look like specimens from petri dishes. One of Lam’s works in Coquette refers to coral polyps, and her creation method approximates the expanding growth of an organism. This is zeitgiesty: Glenn Kaino’s groundbreaking 2014 Tank installation presented environments in which colorful living tank-grown corals waged an epic battle for survival as they spread themselves over cast resin bases formed from military equipment. Experiments with genetic hybrids are increasingly in the news. Maybe some of the underlying mystique and appeal of Lam’s creatures can be attributed to our unease with genetic manipulation, but generally, the works don’t lend themselves to conveying any deeper messages. They’re about surface appeal. 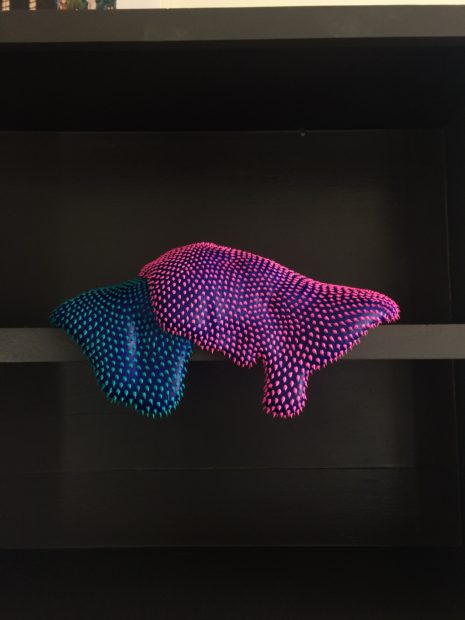 So the question is whether they’ll have any staying power, especially as artworks. Are they an internet fad that will fade, and will Lam tire of cranking out these pieces? Will seasoned collectors buy into Lam’s Candy Crush color palette? There are nearly 100 works on display in Coquette, and Lam enjoys brisk sales, including at this venue. She also sells her work through galleries in New York, California and New Mexico. And yes, the easy accessibility of Lam’s work has drawn a younger generation of visitors to the galleries showing her work. That’s worth something. And we know that the manner in which an artist can connect to collectors is changing. Dan Lam may not be a household name, but she’s achieved some impressive exposure on the internet within months. For a millennial artist, that may be the measure of success that matters.

At Fort Works Art through Sept. 17.

Nice gimmick—I don’t mean that in a totally derogatory way—what next?