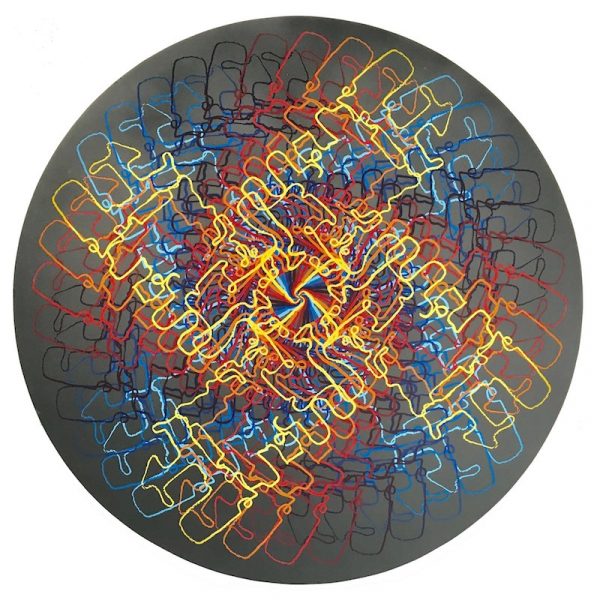 Trying to locate the art in the most mundane tasks we engage in on a daily basis may feel unlikely, but Greg Bahr has managed to do just that through his solo show at Fort Works Art in Fort Worth. Bahr’s abstract works exude a hypnotic force in their vivid, mandala-like imagery. The generator behind what Bahr calls “topographical landscapes” is surprising. The linear motif screen-printed multiple times in rotation is generated by a routine that Bahr undertakes on a daily basis in his job as head preparator at the Amon Carter Museum of American Art in Fort Worth. 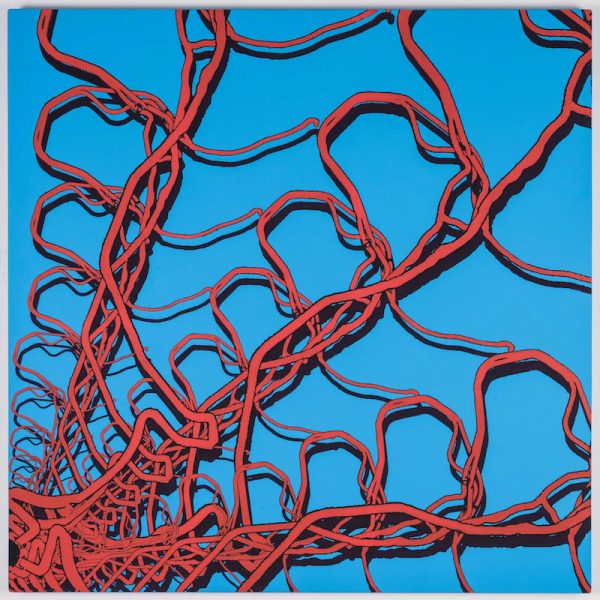 “The initial piece, Morning Rounds, used my pathway that I walked every morning at work while dusting casework and checking gallery lights,” Bahr explains in a conversation with Glasstire. In Morning Rounds, his translation of these trips is screen printed in prismatic colors and arranged incrementally to create a spinning form. Bahr continues, “I started creating artwork with the traced pathway just over two years ago. I had been interested in human pattern and routine for a while, but had never developed a visual translation. This was a breakthrough for me. I feel that it’s the first time that I have balanced the aesthetic with the concept.” 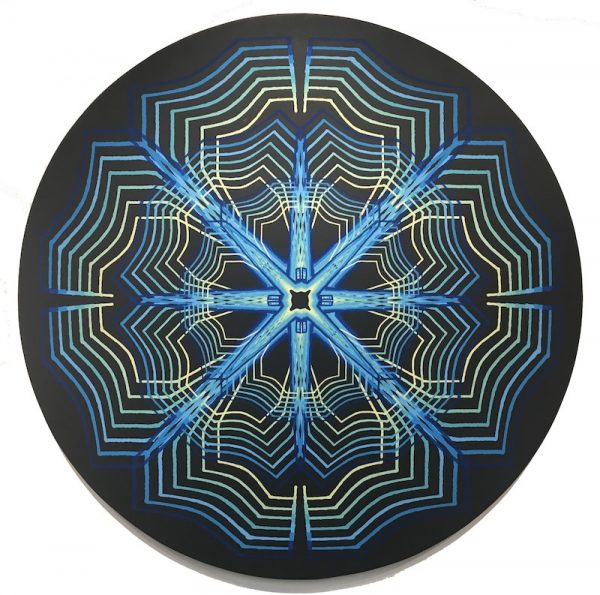 Other trips that figure into his work are from home to work, leaving work for lunch, trips to kids’ school and daycare, and bicycle rides. The imagery that includes a dot are the bike rides, and for those routes Bahr tracks his route using GPS ride apps with the dot appearing as the destination. Spiral Route is his bike route from home to the mile-0 marker and back, via the Trinity Trail, the same route as in Trail Route. In some, Bahr varies the representation of the trip motif as spiraling outward from the center, or a single trip motif is repeated in increasingly larger sizes, such as in Spiral Route and Lunchtime.

Is the creation of these works part of a personal meditation practice? “I practice some focused breathing, but not regular meditation. I will say that I find a relationship between the repetitive act of screen printing and meditation. The circular shape fits the composition initially, but then I realized there was this other aspect of the mandala, which made sense to me. But in formal terms, the circle helps to keep the eye moving around the image.” 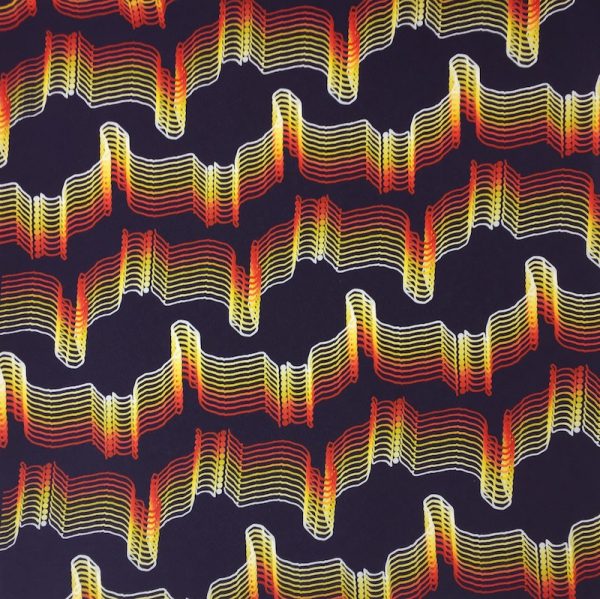 Routescape is a serigraph that changes the orientation of the trips of the tondo into parallel paths, creating a kind of topographical variant, and Gateway is a wall sculpture that results from a fanlike arrangement of parking-garage tickets collected during visits to the YMCA. The collective effect of all of these variants in color and form gives this show a dynamic kind of energy. 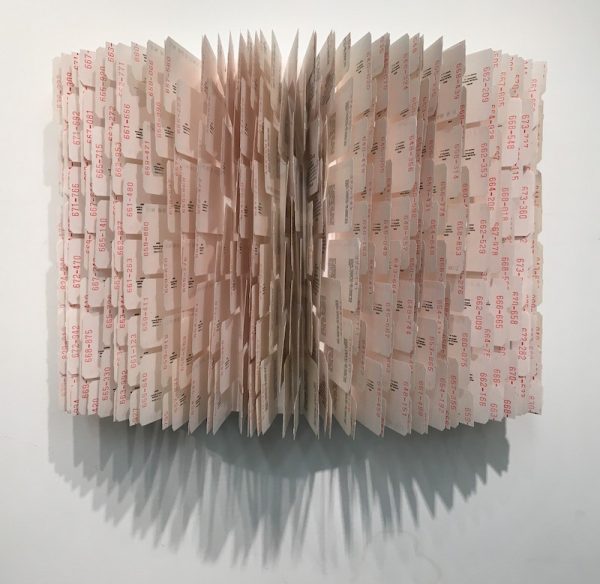 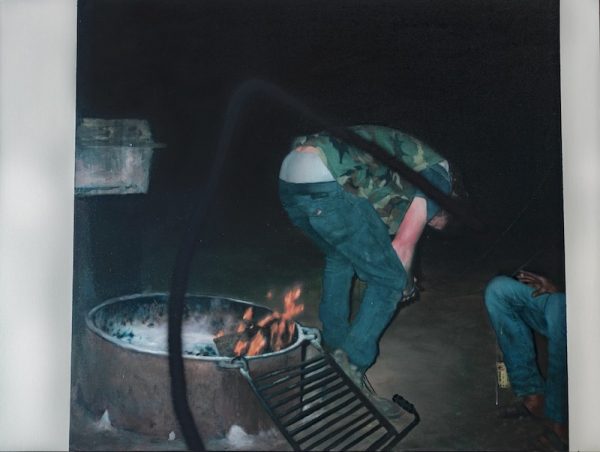 Jay Wilkinson’s figurative paintings and drawings in this show differ from the origins of his previous solo show at Fort Works Art — that earlier imagery was inspired by childhood photos. His current figural imagery derives from photographs that Wilkinson took during outings and parties with friends, such as A Bear in the Woods and Mob. A video that he made, the footage lit by flashlight, shows his friends hanging out at night, and it shares a wall with A Bear in the Woods. “I wanted to explore the way my photos made the moments feel and how it shapes the memory of these occasions,” Wilkinson writes in an email. “I started seeing these photos as they are to me perfect and frozen and somewhat cold — though they are party shots, I wanted them to represent the feeling of being alien and detached from an experience, especially one so ruckus and large.” 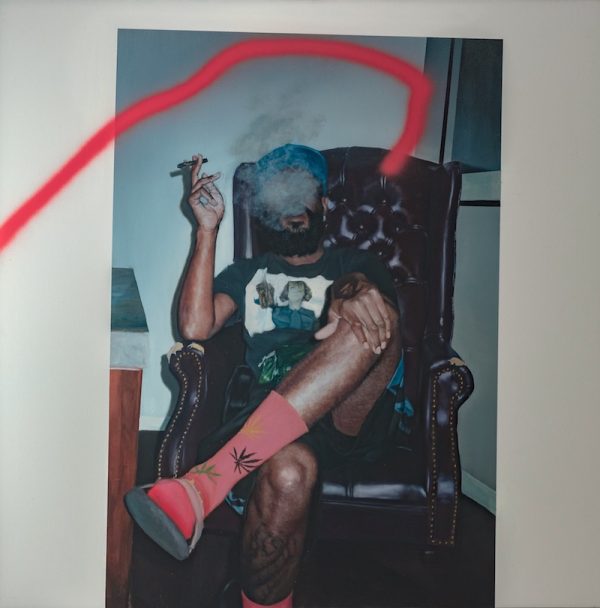 Wilkinson recreates the photographs as if they are sitting on a white table — “…the decision to leave the borders in the painting was… to try and minimize depth and distance… I wanted to show how flat these moments can feel.” Wilkinson’s deft painting technique captures the essence of the photographic image seemingly effortlessly.

He added lines of spray paint to alter his meticulous work on the paintings at a pre-opening night event. While the sprayed lines appear improvisatory, their placement is carefully considered. “Human memory is not picture perfect — it’s more of an assemblage of imagery and emotion, so I wanted to add a powerful color moment, and the actual line and spray paint itself came from wanting to kinda usurp my own efforts of detailed execution. I wanted to try and treat the hours of work as if they were unimportant.” 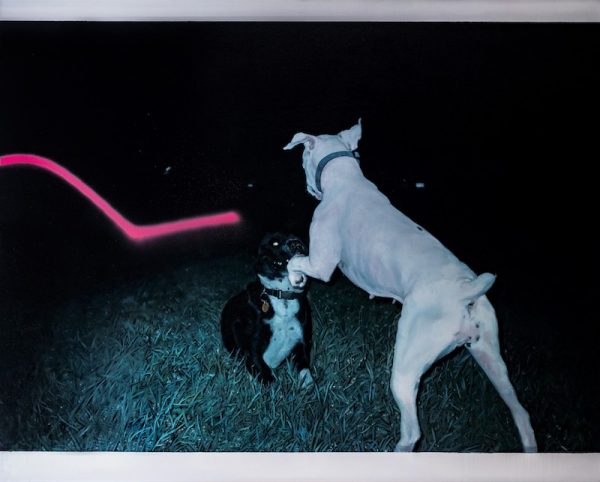 Wilkinson continues, “What I’m coming to understand about why I enjoy working from photographs is that it pulls the life out of the image and freezes it sometimes in an odd and uncomfortable way, and I think that is beautiful and very telling of our world and the way we use photographs to preserve what we believe to be ourselves and our memories of our most founding moments.” 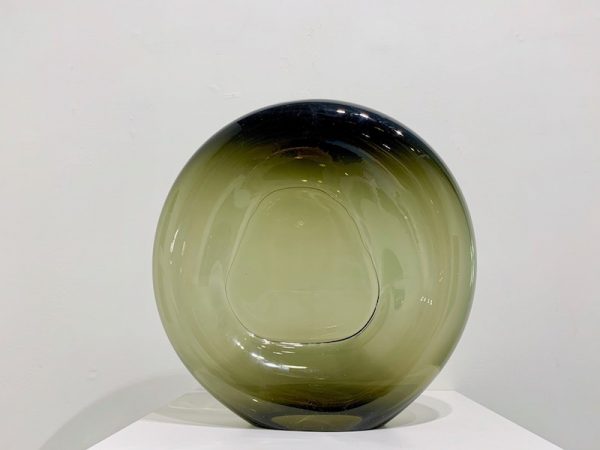 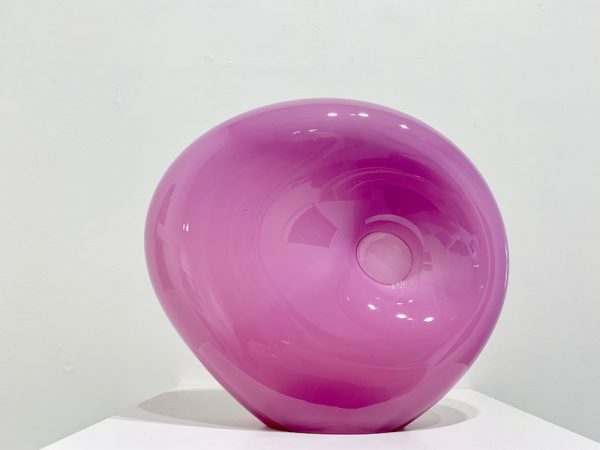 The pairing of Wilkinson’s figurative works with the simple, clean forms by glassmaker Austin Fields was the idea of Fort Works Art owner-curator Lauren Childs, who feels that Fields’ curvaceous “feminine” objects work as a counterpoint to Wilkinson’s predominantly masculine subject matter. Fields’ curving, dimpled, blown glass forms can be interpreted as abstractions of eggs or womb-like anatomical forms, and their simplicity of form and finish is a foil for the complexity of detail in Wilkinson’s paintings. In addition, the variation in pastel coloration in some of Field’s glass pieces is intended to complement the colors in Wilkinson’s paintings, as in the pairing of Wilkinson’s Keep’m with pieces from Fields’ colored Touch Series. 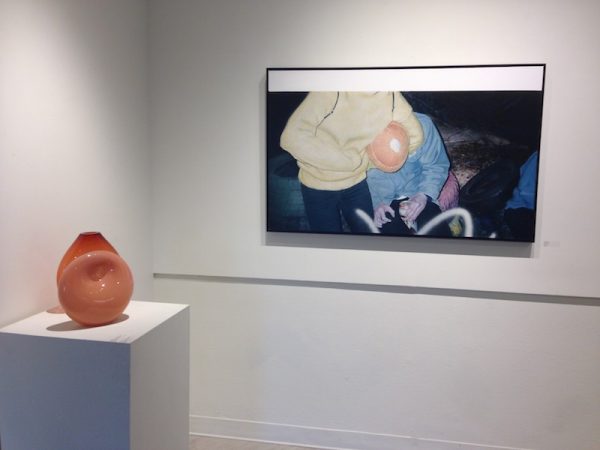 Field’s mirrorized blown-glass forms she calls “Mirrored Orbs” are more visually complex, and reflect and distort the images of people and objects in the gallery. This feature adds movement and a transformative figural aspect to these works that complements Wilkinson’s paintings. Fields developed her glass-blowing skills in UT Arlington’s School of Art glassmaking program, and an installation video she created was filmed in that glassmaking studio. The video shows molten, glowing glass being dropped through a metal screen, as the cooling strands of glass pile up on the ground to create a glowing hot form. Soon Fields will leave North Texas for Los Angeles, where she’ll continue this work in a glass studio. 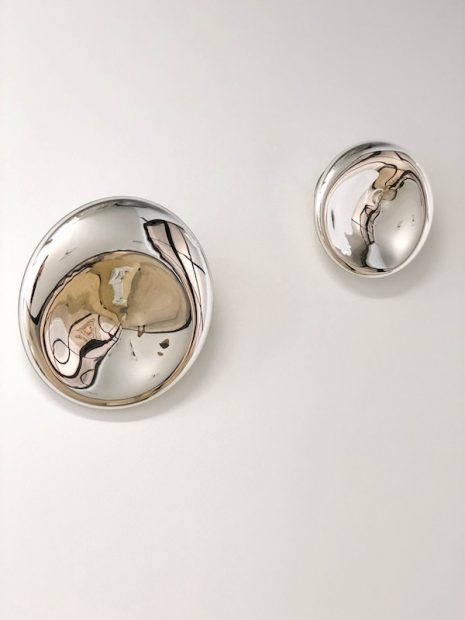 Note: Greg Bahr will give an artist talk at the gallery on Thursday, Jan. 31 from 6-7 p.m.