Two Shows: Hillary Dohoney and ’40 Under 40′ in Fort Worth 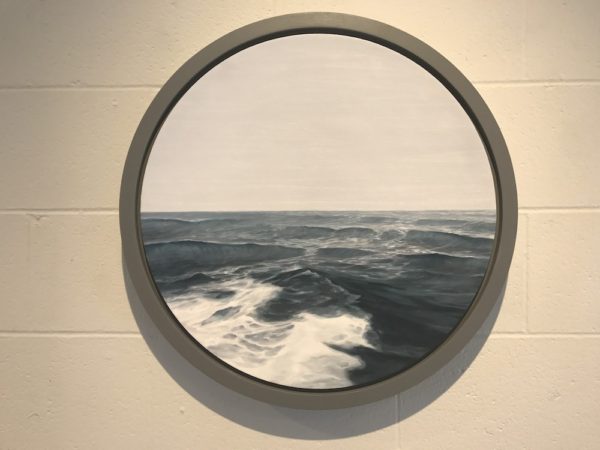 Walking into Hillary Dohoney’s solo show at Fort Works Art is like taking a plunge into cool, deep water — total immersion. This can be refreshingly bracing, but for some unlucky individuals, it can be deadly. Water, a subject Donhoney works with, can be calming and meditative, or it can be symbolic of dreams and passions. She touches on all of these aspects of water in her exemplary show.

The show includes (and is an extension of) her ongoing Becalm series of water imagery that she started in college. The word becalm refers to a ship that cannot move in the water because of a lack of wind. Dohoney’s use of the word refers to the effect that painting water has on her emotions, in a mindful sense. Be calm. The way the water looks in her paintings suggests her emotional state at the time she was working.

Be Calm XXII, typical of these works, shows a clear, gray sky paired with water. The highlights on the water suggest a calm, cold feeling. By comparison, Be Calm – Mob Mentality displays very dark water that suggests the emotional tension Dohoney was experiencing as she battled an ant invasion in her home. The tiny ants crawling over the sky are a surreal touch.

Dohoney gave an artist talk at the gallery, and in response to an audience member’s question, she said that she does not use photographs for reference when painting water. She employs a variety of painting techniques, including long horizontal brushstokes for calm water, a web-like network of white lines for choppier water, and many tints and shades of blue to achieve a reasonably suggestive rendition of water. She paints wet-into-wet oil on wood panels.

Unusual installations are a hallmark of Fort Works Art shows, and this show features new physical configurations of Dohoney’s panel paintings. The artist was aided by the craftsmanship of Brandon Pederson, who used flexible plywood to create deeply curved wood supports for several paintings, all titled Adrift. Three of these curved panels are hung in a circular fashion so that the viewer can enter the interior space and have a 360 degree viewing experience. Porthole II (shown at top) is one of a series of tondo paintings that have a concave surface created of MDF using a CNC machine. A larger tondo, Becalm Memory, has a zen quality in its misty image of an island outcropping surrounded by calm water.

Diviner is one of the larger examples of painted water paired with an object — in this case, a rendering of a long broken stick that casts a shadow on the sky. Trompe l’oeil painting has been a long preoccupation for Dohoney, and many of the paintings in the show include finely observed and painted objects floating in the sky above watery landscapes. 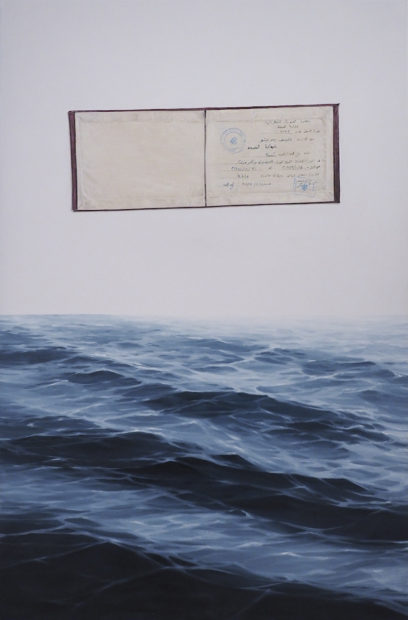 Dohoney’s most recent works expand on her explorations of the water theme. Dohoney has a strong interest in refugees, and these new works were inspired by her encounters with refugees who recently moved to this region. Refugee Services of Texas arranged for Dohoney to meet with refugees, and provided translation services as she interviewed them. Dohoney asked the individuals to lend her an object that was special to them so she could paint a trompe l’oeil rendering of the object within her painting. As she listened back to the recorded interview multiple times, she worked on the water portion of the painting until it felt as though the water reflected the emotions of the individual. The painting Aamina is based on a Somali midwife who lost close family members to violence in Somalia and fled, pregnant and with her surviving children in a boat to Yemen. Eventually she remarried and relocated to the U.S. where she hopes to become certified to practice as a midwife. Dohoney has donated 50% of the sale proceeds to Refugee Services of Texas. 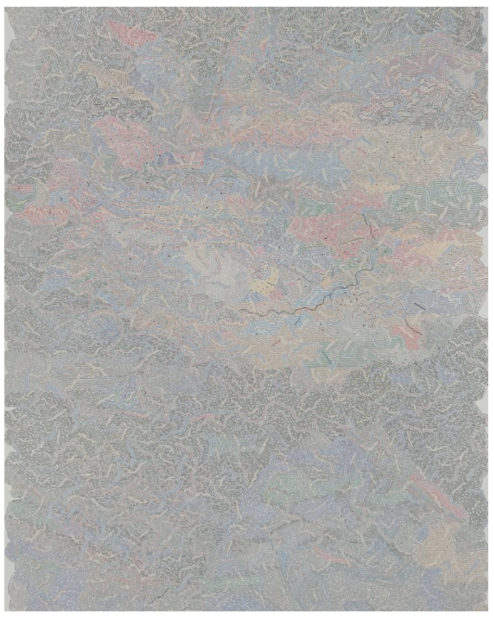 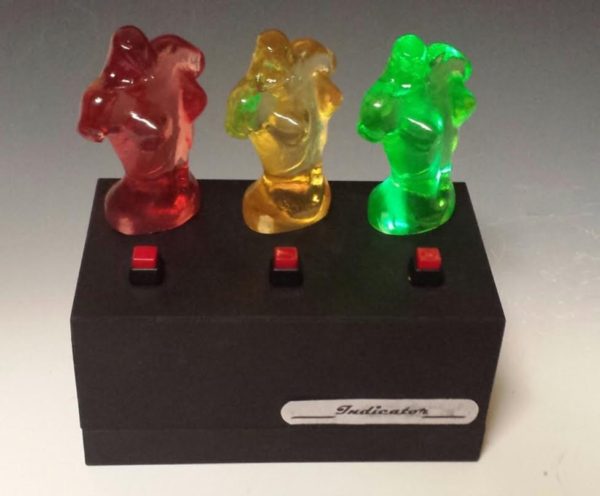 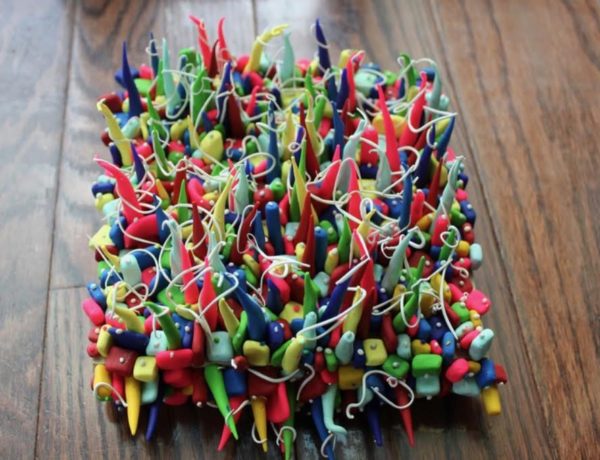 Maggie Adler, an associate curator at the Amon Carter Museum of American Art, was the juror for the 40 Under 40 exhibition that occupies the upper gallery at Fort Works Art. She selected works ranging from realism to abstraction for the show. The Best of Show award deservedly went to Adam Palmer’s Small Town Boy, one of his inspired virtuosic drawings in marker pen. The variety of media in the show is notable; one unusual example is a pillow-like wall piece by Darcie Book titled Every Cloud (Paint Pillow) made from latex paint on cotton, folded and shaped on an armature, then stuffed with polyfil. Among the sculptural works, the wryly amusing Affirmative Consent Indicator Night Light, made of mixed media resin casting, was submitted by Breanne Schwarz. The artist describes the work as the “perfect tool for couples to understand the level of desire and consent in any given evening,” and adds that inside it contains “an instruction booklet and a supply of prophylactics.” Another small but colorful sculptural work by Madiha Siraj resembles overheated candles. Titled Overcrowded Suburbs, it’s made from polymer clay on a wood base. The 40 Under 40 exhibition is a nice example of how Fort Works Art is going the extra mile to support and engage emerging and established artists in the region.

Both shows are on through Oct. 28 at Fort Works Art, Fort Worth.