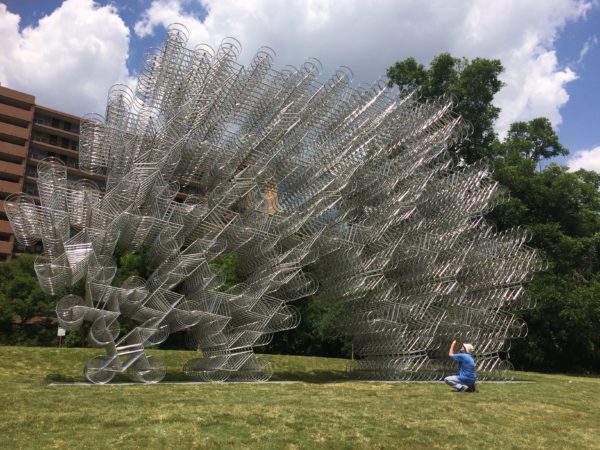 The flagship Whole Foods in downtown Austin recently installed a hollowed out “atx” sign covered in a fan of multicolored stripes. My partner and I immediately remarked on how Instagrammable it is. Each time I’ve driven past it in recent weeks, there have indeed been bodies poking out of the letters of the sign and posing for a smart phone. Austin’s population is growing by a stunning 159 people a day, thanks to a boom in the tech industry, the draw of cultural capital like Austin City Limits and SXSW, and a flourishing food scene that is consistently highlighted in Food and Wine’s lists of top chefs and restaurants.

Two months ago, Austin got an infusion of new art from international art star Ai Weiwei, whose massive sculpture Forever Bicycles is installed on the edge of the Waller Creek. The piece stacks rows of bikes sans tires eleven deep into a snowflake-like geometrical formation resting on a path of grass. (Another work by the artist is up at The Contemporary’s spot in Laguna Gloria). The way the bikes are aligned creates an uncanny blur when viewing the work from a certain angle, allowing light and shadow to enhance the illusion depending on the time of day. The official statement about the work includes commentary about Forever bikes, a brand that proliferated in China but whose two-wheelers were far from being financially obtainable for many citizens during the artist’s childhood. But it can be hard to feel much emotional resonance from this information that’s included on the plaque in front of the work and see beyond the cool-factor of this Austin-ready piece that incites so many “ooohs” and “ahhhhs.” It is visually striking. But the repeated question with public art — one that seems to have been forgotten of late with the ubiquity of smart phones — is how does an audience engage with a work of public art?

The University of Texas’ Landmarks program has brought the work of world-class artists to its campus, including  James Turrell, Ann Hamilton, and Mark di Suvero, but none reaches the level of visibility that Ai Weiwei’s work on the lawn in front of the Waller Creek boat house has. It seems to me that this sculpture is a conspicuous attempt to leverage Austin as a player in an international scene, which isn’t a bad thing by any means, though the placement of the work is disconcerting: To reach it you pass down Trinity Street, between luxury housing from The Four Seasons and a tower of public housing.

On a steamy 90-degree afternoon last week I walked down to take a closer look at it, and watched a steady stream of passersby did nothing more than whip out their phones to grab a few pictures of it and be on their way. Joggers, tourists, moms pushing strollers, cyclists. No one lingered, and inevitably their gaze was mediated by the screen of the phone. What’s the point of putting the work of Ai Weiwei in Austin if the only way people engage with it is as a means to buffer their Instagram with likes? How does the bike sculpture’s meaning pivot from China to Texas, and more specifically Austin, to offer something new or provocative?

One could look at the ever-growing demand for better public transit in Austin so that we’re less tied to our cars, or think about diminishing accessibility given the fact that the infrastructure of the city can’t keep up with the rate of growth. Through his work Ai Weiwei interrogates power and dominant historical narratives, in works like Dropping a Han Dynasty Urn, a performance in which he documented himself shattering an ancient vessel, or Coca Cola Vase, where he painted the Coke logo on a piece of antique pottery. Ai Weiwei’s reputation is built on the rigor of his political commentary and pushback against the censorship and oppression of the Chinese government.

What troubles me is that Forever Bicycles is placating an audience rather than engaging it. There is a seduction in gathering 1200 of the same item into a mass. We’ve seen sculptures of this nature before that rely on quantity and mass to do the conceptual quasi-heavy lifting. Don’t get me wrong: I’m grateful to see Ai Weiwei’s work here in Texas, but its symbolic leverage is skewed here. We need more than just another hashtag and selfie station in our ever-growing city. It’s the duty of The Contemporary and the Waller Creek Conservancy (the hosting institutions behind this piece) to do more than just plop a sculpture outside and include one sentence about the significance of the materials. And we, as the Austin audience (here in the seat of Texas government) need to consider the work with a degree of thoughtfulness. Instagramming art isn’t evil. It’s helped many artists gain popularity and career momentum. There are abundant examples of public art that have transcended the social media fads they’ve inspired.

But we need to look harder and think more deeply. What is our responsibility as viewers of this work, and of public art in general?

Just because people don’t linger doesn’t mean the art isn’t impactful. It seems to me you’re commenting on American culture rather than the integrity of the artist, the work and the institutions displaying the work. People are people. Just because no one’s meditating for an hour in front of it in the 90 degree heat doesn’t mean someone’s life and thought processes weren’t changed because of Weiwei’s sculpture. It’s not your business how people interact with art – art is personal and public. No one needs art police.

And the responsibility of the viewer? Just to enjoy. Art doesn’t always need to evoke “responsibility,” or else, why call it art?

Besides, the artist’s life is the art. The creation is just a product of their inner work and experiences.