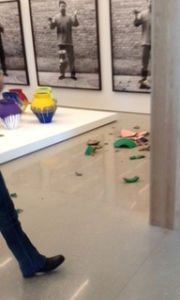 On Sunday, a visitor walked into the Ai Weiwei: According to What? exhibition at the new Perez Art Museum Miami (PAMM), picked up a vase and, when approached by security, purposefully dropped it to the floor.

The art smasher was Miami painter Maximo Caminero, who said he broke the vase to protest that the museum only displayed art by international artists, according to the police report.

The vase, reportedly valued at $1 million, was part of the installation “Colored Vases,” in which the Ai dipped vases from China’s Neolithic period into brightly colored industrial paint. While some view that very process as an act of vandalism, it is meant to serve as a “metaphor for the conflict between East and West, a conflict between culture and commercialism.” Ai has long attracted international attention for criticizing China’s government policies on democracy, free speech and human rights. On a local broadcast, CBSMiami’s Gary Nelson stressed the distinction between the acts, stating that Caminero’s vandalism was ”based not on politics, but on jealousy.”

Caminero said he planned to host a news conference on Tuesday to explain his actions. Maybe it will make more sense than Uriel Landeros’ lawyer’s explanation for his June 2012 defacement of a Picasso painting at Houston’s Menil Collection: “what he did to the painting was not criminal mischief, it was an artistic statement, an expression, much like graffiti art is.”