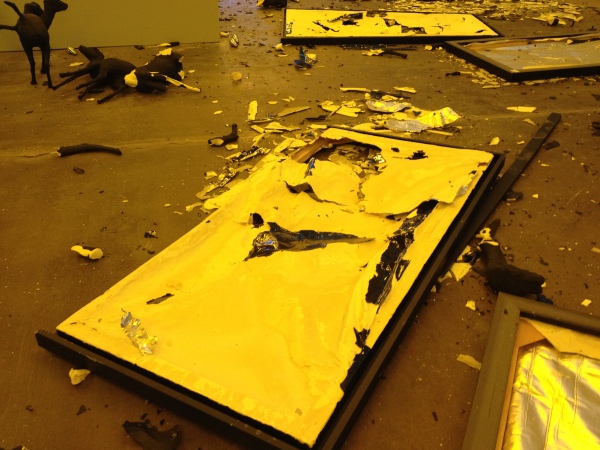 I suppose in the event of a chemical attack or nuclear apocalypse, a crowd of Dallas Contemporary patrons would be as good company as any to be stuck with. They are certainly relaxed, orderly, and polite.

I found this out on Saturday night at the Contemporary. Halfway through the opening for the long-anticipated Loris Gréaud show, a group of actors disguised as party-goers walked into the building and began pulling works off the walls and flinging them to the ground, and kicking over plaster sculptures. Another group of actors disguised as security guards immediately began to wrangle the half-bemused, half-blithe crowd toward the exits. Lights flashed, a few sirens sounded. People kind of good-naturedly lumbered out.

On the way, a few dozen hands shot up holding cel phones set to “photo” or “video,” but not as many as I would have expected under the circumstances. No one tried to get around security to join in the destruction, just as no one tried to intervene. Though few people in attendance knew what was meant to go down, you’d think that everyone there had all seen it before, like a rerun of a classic episode of “Seinfeld.”

We were herded back out into the front outdoor ramp and parking court. They shut the doors behind us and I think we were meant to imagine that the destruction would go on inside until the whole show was in ruins, or that the security detail was methodically arresting the fake party crashers. I also think the Contemporary was going to move us back inside after a spell, and thankfully the weather was nice. A few hundred people stood around the parking lot chatting about, to my ears, just about anything besides what they had just witnessed. I overheard people talking about where to eat later, whether it was worth getting in the long line for a drink at the outdoor bar, what kind of car they were leasing… . I heard a few people wondering how long we’d have to wait to go back in. No one seemed in the least shocked or dismayed that they had just seen some artwork being damaged. And that’s not a criticism of their ability to grasp the event. There wasn’t much time to become invested in the work. It’s not like a group of actors had just walked into an institution and took axes to a selection of Rembrandt paintings, that’s for sure.

I stuck around for fifteen minutes and left. But I drove back over the next day to see just how much of the work the actors had destroyed in the end. I was thinking: Maybe if they’ve really pulverized everything in the building there’ll be some redemption in this idea.

But they had not. I didn’t have a surveyors’ wheel or a calculus expert with me, but I estimate less than 25% of the show was seriously damaged. Most of the damaged works were parts of multiples or casts. Certainly the effect is that anyone who walks through the show still has an immediate sense of what it all is, sans disruption. Most of what I think of as Gréaud’s tableaus—the individual sets of works that present much like a separate stage or movie sets—were still standing. I was disappointed. 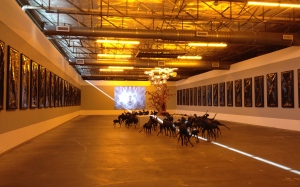 one room: before destruction 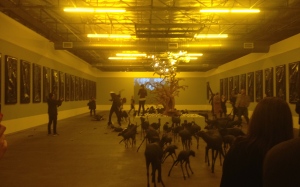 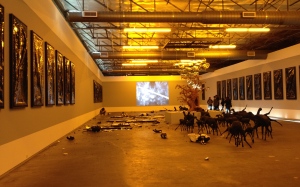 Because the destruction felt a bit feeble in light of how fully the artist and Contemporary could have committed to the idea. As a member of the press, I knew what was planned and sworn to secrecy. I had a day to imagine the worst, and that was fun. I was also, as a  person formerly in charge of a non-profit, quite nervous on behalf of the Contemporary. People could get hurt. That sense of danger and uncontrolled chaos is where the real interest is in an art-destruction stunt when the work is big and heavy and made with sharp edges and there’s a crowd and alcohol involved. (Remember Survival Research Labs in the ‘90s?) An artist publicly destroying much of his catalog is interesting in itself, too.

Those of us who saw the show prior to the mini mayhem will have a sense of “before and after,” as the artist wished. The destruction of the work was the show. Or at least the artist indicated as much to the press. But it was hardly a shock; instead we’re left with a partial and contrived ruin. Which isn’t to posit the initial effect upon entering the Contemporary is completely hollow; individual aspects of certain tableaus do work. I liked the soundtrack in two rooms, and the videos are visually compelling. And the various physical objects and their arrangement fill up the Contemporary better than any previous show I’ve seen there, with or without the damage. We all know that’s a difficult space to negotiate, for artists and curators alike. 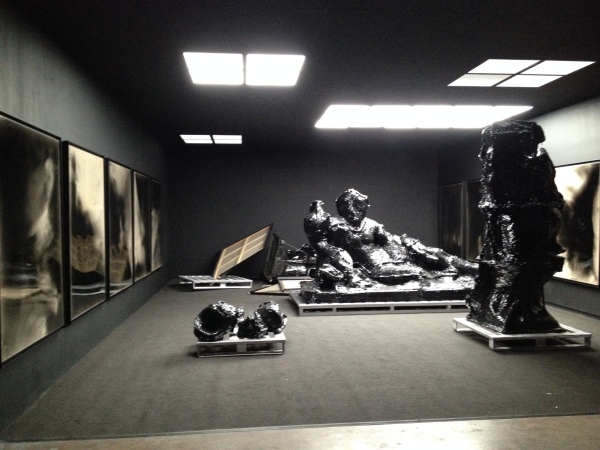 I imagine there will be some national press about how Gréaud destroyed his own work in Dallas.  But here I’ll take a moment to point out that Gréaud traffics in the kind of heavy conceptual art that works its metaphors and theories hard. Meanwhile, the actual physical objects appear inexplicable and are often ponderous objects or installations. This is a side of conceptual art that runs the risk of didactically separating form and content, where the whole feels like less than the sum of its parts. We might call it top heavy, or as I call it, Conceptual Opaque.

Most of his objects are indeed meant to stand as physical manifestations of his obsessive indexing/analysis/labor/cataloging of facts, systems, or historical vestige, but unless someone or some text tells you all about it (and then you have to take it on trust), you’re left with work that might have you wondering why it needs to exist. And furthermore, once the belabored nature of the work is revealed, we wonder if the viewer is meant to take on the burden of some its (at times) epic commandeering of artifacts. For example, Gréaud claims to have sourced 900,000 hourglasses for their sand, which was then recycled into blown-glass clouds for the viewing public’s consideration. Are there any hourglasses left in the world? I get it: the inside of the hourglasses– the part that once represented time—is now transformed into the part that represents space. But an hourglass already contains this conceit. So, is the destruction of the work meant to be our release from all that industry? If so, I might have welcomed more destruction and less burden. Sulfurous lighting aside, the whole often felt wanting of a poetry that struggled to live up to its conceptual billing. 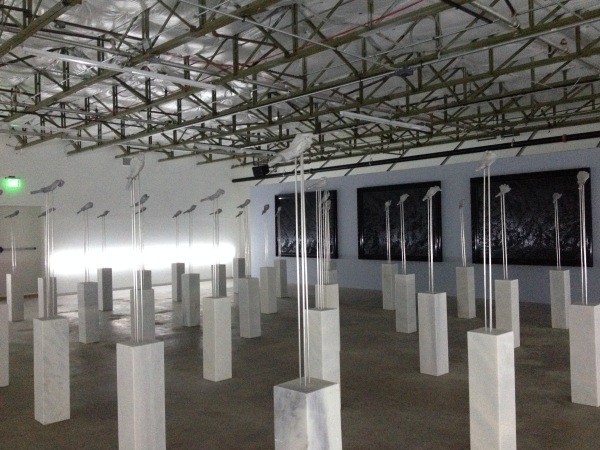 And more often, of course, explanation and analysis kills poetry (and jokes) outright. The soundtrack in one room—my favorite thing in the show—comes through a speaker and is a hard Bronx-accented man reading out what sounds like a bonkers list of absurdist tense conjugations. At first it feels sad and urgent and angry, and since it plays in a room filled with sixty-something outstretched fists, there’s a dose of revolutionary or fascistic satire coming through. But it’s actually cult filmmaker Abel Ferrara reading William Burroughs. When the artist explained this to us at the press preview, and all the editing tricks he employed and the reasons he chose that famous pal to read that particular text, all the mystery left the room. For me. I suppose some people would like the piece more after they got the backstory.

I’m not altogether sure when (or why) Gréaud decided to destroy the work to make the show, and whether or not showing in Dallas had any significance in that decision. It could have been five years ago or five weeks ago. I’m wondering if it matters now that it doesn’t feel to me like there was enough resolve, just as I don’t think it would have mattered had the spectacle been more spectacular. But it crosses my mind nonetheless. At this point, he can tell us what it’s meant to mean (according to his own rules) and we can be moved or not. But perhaps moving us was never his point. We may never really know. 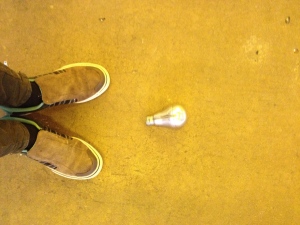 Loris Gréaud: “The Unplayed Notes Museum” at the Dallas Contemporary through March 21.

A Chance to Hear the Leading Expert on...

Sounds like Claude Wampler did it better at Diverseworks, back in 2001.

Wampler truly had the element of surprise: only a core group of DW staffers and audience plants knew what was going to go down at her performance (which our writer Chas Bowie described as “a heart-stopping ride” in the link above).

It was probably a mistake for Gréaud to leak to the NYT (or anyone) in advance, unless, as you note, the goal was to make people examine how they’re not surprised by a surprise they knew was coming.

Even from real time cell phone video uploads i could read that it was staged. The work looked like cheap movie set objects. The French tend to think low of American intelligence anyways. This is Dallas tho. Lol

M.Gréaud was honored by a panel discussion at UTDallas on the 15th January. The discussion was preceded by a statement by Nicolas Bourriaud, the head of the École Nationale Supérieure des Beaux Artts in Paris. M.Bourriaud is M.Gráud’s idle. M.Bourriaud’s main tenet is that there is no ‘origin’ to anything.

The discussion that followed featured distinguished academics in the area and M.Gréaud himself. The ideas that were shared by M. Gréaud are very exciting, about a movie he made about a concert designed for deep sea creatures to elicit a response which would be visual (to us).
Perhaps the ideas motivating the DMA exhibition, are just simply more exciting and a deeper experience than any manifestation about them could possibly be. As you say “maybe we’ll never know”. Your article is appreciated, thanks. It makes me believe that ‘Moving and Unmoving’ isn’t a performance piece but strictly an installation piece.

I meant Dallas Contemporary, my apologies.

I agree with Guy. People knew going in something was going to happen and when it did the result was a pretty sad trombone. If there really was an implied threat I imagine heart attacks and lawsuits. Better luck next time.

The exhibition and performance were awesome. I came back the next day and was impressed with the damage to the exhibition. Great stuff.

French artist demonstrates how not to handle criticism:
http://hyperallergic.com/177874/a-french-artist-demonstrates-how-not-to-handle-criticism/

I gave Liam Gillick the whole FW Contemporary for show in 2011. Beaucoup RE during those weeks. He really made the rounds, too. Here’s a link to his talk at the Modern the week of the opening. It’s quite good.