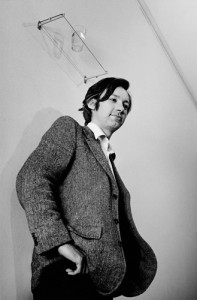 A young Craig-Martin standing beneath his seminal piece, An Oak Tree, circa 1973

Michael Craig-Martin, artist/former Goldsmith’s professor and so-called godfather of the YBAs, is on his way to Dallas for his big takeover of ten different venues. That’s hyperbolic, of course, but barely: his work will be on display across a number of sites in conjunction with his being guest of honor at MTV’s RE:DEFINE auction gala (which takes place April 10), co-hosted by the Goss-Michael Foundation and the Dallas Contemporary (and MTV).

Here’s a list of places around town where you can see Craig-Martin’s work (painting, prints, sculpture) starting in early April and in many cases running through summer: Goss-Michael, the Contemporary, the Nasher, DMA, the Joule Hotel, Northpark Center, SMU, the Meyerson, the restaurant le Bilbouquet, and the downtown branch of the Dallas Public Library (yes!).

RE:DEFINE is in its fourth year in Dallas; proceeds from the auction go to HIV/AIDs research and the Dallas Contemporary.