A frequent criticism of Matthew Barney’s laborious, labyrinthine films is that they drag on for so long, they read as pretentious. After attending a screening of Barney’s Redoubt (2019) earlier this year, I’ll admit I can empathize with the argument. “Get to the point,” is what even some of the most adventurous art lovers may think when entering hour three of a wordless opera. When we don’t understand where things are going, it is harder to commit to the journey.

In Jillian Steinhauser’s essay, linked above, she makes this charge. But this insinuates that we can be expected to tolerate succinct, or shorter, bits of the avant-garde, though our participation can’t be expected after an unspecified runtime. The operative concept here is viewer “tolerance,” which seems like a strange way to justify or critique something as laden with rhetoric as art.

If an artwork is short, does that make it more polite? Treating the viewing experience as an expense of time (which it is) makes it transactional — and we believe our understanding of the work will be assured once it is over. But this approach to experiencing art is less about being open to meaning and more about having expectations before or upon arrival. 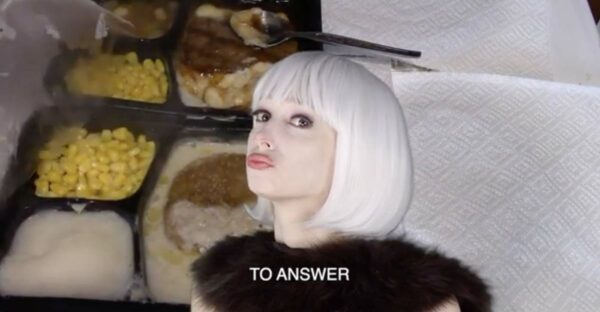 Tan, a video series hosted by Dallas Contemporary on its web site, is a collection of digital clips by Dallas-based Hillary Holsonback. It is an example of eccentric micro-theater that sprints in comparison to Barney’s cinematic marathons. Holsonback, as a performer, has developed Tan, a haughty, platinum-blond variant/alter ego — part of the artist’s acting portfolio. Holsonback’s characters are sometimes an intervention, as in Disturbance, an event hosted by Sweet Tooth Hotel in October 2019, where she acted as a party host, posing with attendees for selfies — still viewable as the “New Friends” highlight reel on her @hillyholsonback Instagram account. Her performance work sometimes wades into the realm of forced authenticity; Holsonback acts in the name of art, not always in accordance with craft. 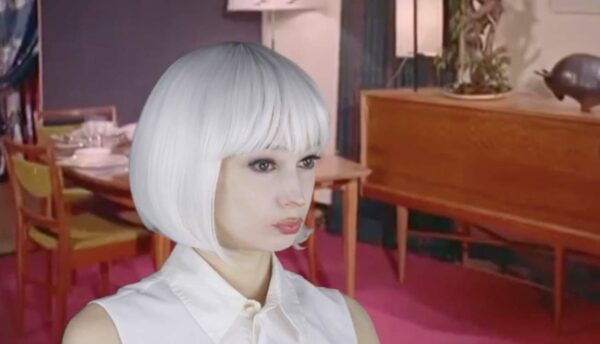 Amongst the Tan works, Holsonback chatters coldly in front of a burning house, a technicolor living room, some sort of drill press, and other scenes. She states blithely: “I’m Tan,” a curious title for a character who embodies the quality of bleach. “Tan exists between moments,” reads the exhibition statement. The differential between Tan’s three-quarter pose within the frame and the close-cropped video playing behind her, as well as the un-contextualized conversation fragments, leave us in purgatory. The character’s indifference indicates a one-sidedness between the performer and the audience; in this way, the work asks something similar of the audience as a Barney feature-length film. We’re left to grasp for meaning, in the way that contemporary works have license to leave matters open.

This condition — that short video can be as oblique as an extended film — should poke a hole in the steadfast notion that durational art has a harder time sustaining viewer interest. But more importantly, why do we need to be convinced? I felt challenged during the screening of Barney’s Redoubt early this year, but by that I’m not implying marked personal growth. I just mean that I was curious to see Barney’s work as it is meant to be seen, and I’m grateful to have had that experience. 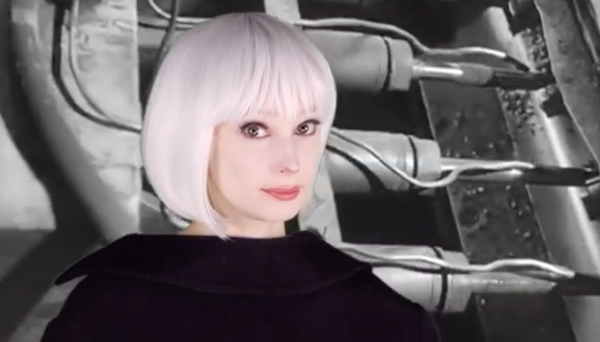 Holsonback was scheduled to unveil the work at the Car Ball, “a celebration of our newly built parking lot thanks to the partnership of Ewing properties,” per Dallas Contemporary’s initial press release. That event, formatted as a socially-distant drive-in, was postponed (now slated for 2021). The news of the postponement was disappointing, as I was looking forward to seeing Holsonback’s video pieces in a white-wall setting, or even on DC’s new tarmac, as they have lived and grown online. Watching them as a small checklist of works on DC’s site makes them feel as though they are stills — outtakes from a larger work waiting to screen in theaters. Holsonback’s work often pushes us to find the context for ourselves. I wish I could to turn to another audience member and say so.