by Brandon Zech May 8, 2019
FacebookTwitterEmail 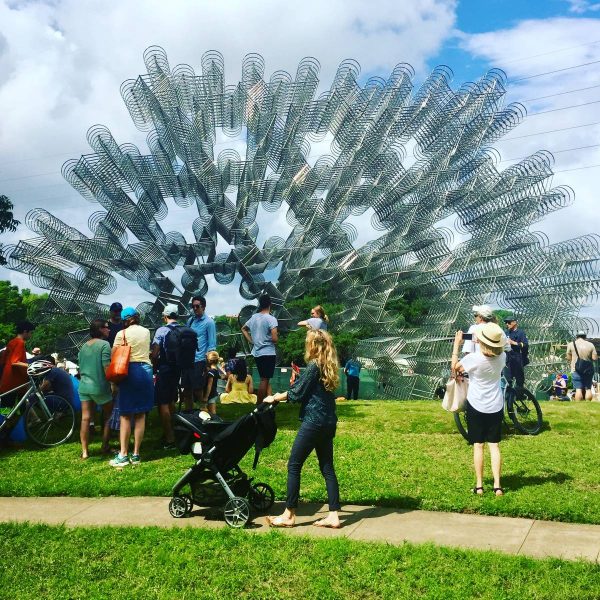 The Contemporary Austin and the Waller Creek Conservancy have announced that Ai Weiwei’s large-scale Forever Bicycles sculpture, which has been on view for nearly two years at the Waller Creek Delta, will officially end its run in the city on May 15, 2019.

The 2014 artwork is based on the artist’s childhood memories of Forever brand (Yongjiu) bicycles that were popular in China when he was growing up. Although the bicycles were a symbol of social mobility and financial means when the artist was young, in recent years their importance has been eclipsed by that of car ownership. This sculpture combines more than 1,200 of these Forever bicycles into a looming, glitchy shape that viewers can walk through.

In a 2017 article, soon after Forever Bicycles‘ installation, Ayden LeRoux wrote about the piece for Glasstire:

“The way the bikes are aligned creates an uncanny blur when viewing the work from a certain angle, allowing light and shadow to enhance the illusion depending on the time of day.”

Later on in that article, Ms. LeRoux went on to ask other questions about the work as an effective piece of public art, noting that its message may be outweighed by its coolness factor and Instagrammability:

“But it can be hard to feel much emotional resonance from this information that’s included on the plaque in front of the work and see beyond the cool-factor of this Austin-ready piece that incites so many ‘ooohs’ and ‘ahhhhs.’ It is visually striking. But the repeated question with public art — one that seems to have been forgotten of late with the ubiquity of smart phones — is how does an audience engage with a work of public art?”

Another artwork by Ai Weiwei, Iron Tree Trunk, was recently purchased by The Contemporary Austin and remains on view at Laguna Gloria.

A concert and series of musical workshops by Steve Parker is scheduled to give Forever Bicycles an Austin-style send off. For more information on that event, which runs 11 Am to 2 PM on May 11, go here.