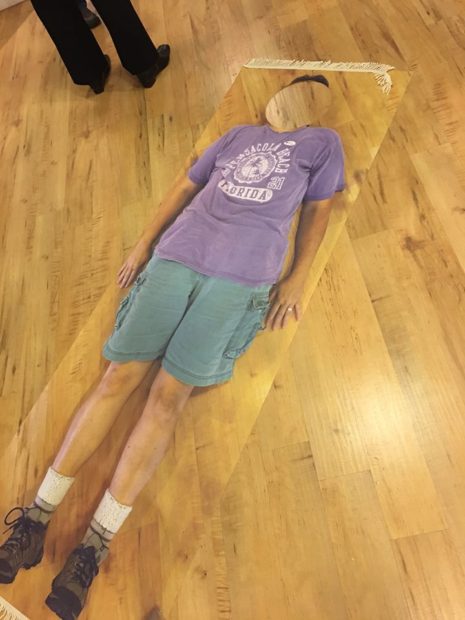 The artist members of the Fort Worth Art Collective debuted their pop-up art exhibition concept back in spring 2013 as “innovative art in a temporary space.” This peripatetic group is getting a chance to show its stuff somewhere other than a pop-up venue for a change. The collective was invited to install and leave their work up November 10 through December 17 by the advisory council of Gallery 76102, which is UT Arlington’s Fort Worth Center cultural outpost, located in downtown Fort Worth. Artists included in this exhibition are Bill Barter, Rachel Barnminski Bounds, Lou Chapman, Sherri Woodard Coffey, Lisa Cunningham, David Conn, Ariel Davis, Cynthia Lewis, Jesse Meraz, Vicki Owen, Stormie Parker, Jason Reynaga, Susan Sitzes, Pam Stern, and Elaine Taylor, and submissions were coordinated by artist Bernardo Vallarino.

Leading off the show is the work of Elaine Taylor, the departing Gallery Manager of the Fort Worth Community Arts Center. Her floor piece Artist Imitates Life, a digital print on vinyl canvas, is composed of a life-sized self portrait of the artist dressed in casual clothing lying flat on the gallery floor. The row of fringe attached at the top and bottom of the rectangular photo suggests it’s a rug to be walked on, and a circular cut-out is positioned exactly where the artist’s face would be. The faceless piece may offer insight into Taylor’s feelings about her departure after managing the nine galleries at the FWCAC for the past 12 years. 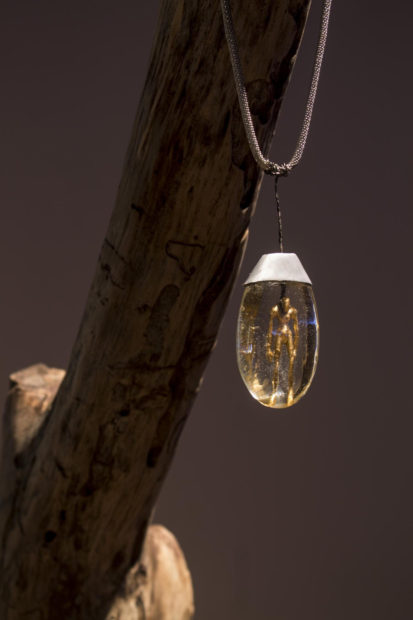 Bernardo Vallarino is another artist with a flair for the grimly dramatic. His work often focuses on the theme of man’s inhumanity to man, and Isn’t It Beautiful is a mixed-media pendant made of a transparent resin globe that on closer inspection encases a miniature lynched man hanging from a noose. The figure is 3D printed, then cast in bronze. Ominous images also populate Pam Stern’s Crowded House, a ceramic stoneware reliquary in the form of a mysterious house. Its roof and windows are covered with a metallic luster glaze, and brown-eyed female faces peer out from all of the windows and doorways save one, which contains a death’s head skull. The walls of the house-reliquary are covered with obsessively crowded imagery of overlapping faces, animals, eyes and moons in sequence. Reliquaries usually contain precious objects, and perhaps the treasures protected here are the memories of past relationships. 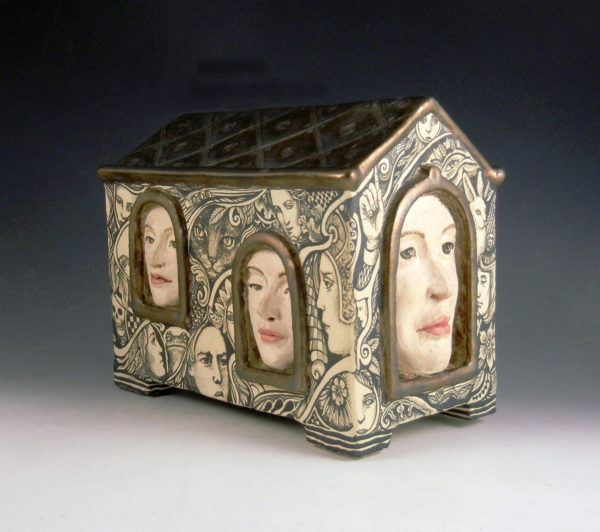 The mood of the show lightens with two ceramic elephants sculpted by Stormie Parker. The wizened faces, wrinkled skin and glazed eyes of Rex and Clyde lend the one-foot-tall figures real personality, and their underlying purpose is to generate support for conservation efforts for these endangered creatures. Pam Stern continues the animal theme in her 14-inch tall stoneware sculpture The Crow Knows. Perched on a ceramic twig, the glowering red-eyed bird is covered with black hand painted female faces, a skull, eyes, a rabbit, several birds, a clock, a cat, and an open palm. 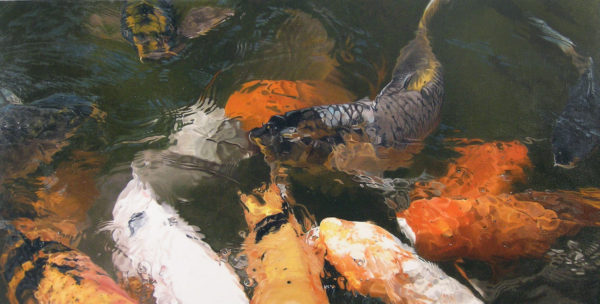 Responding to the three-dimensional ceramic tributes to fauna, Cynthia Lewis includes two-dimensional oil on canvas fish paintings from her Koi Series. These works amply demonstrate her controlled mastery of water reflections and their semi-distortions of partially submerged, brightly-colored fish bodies. 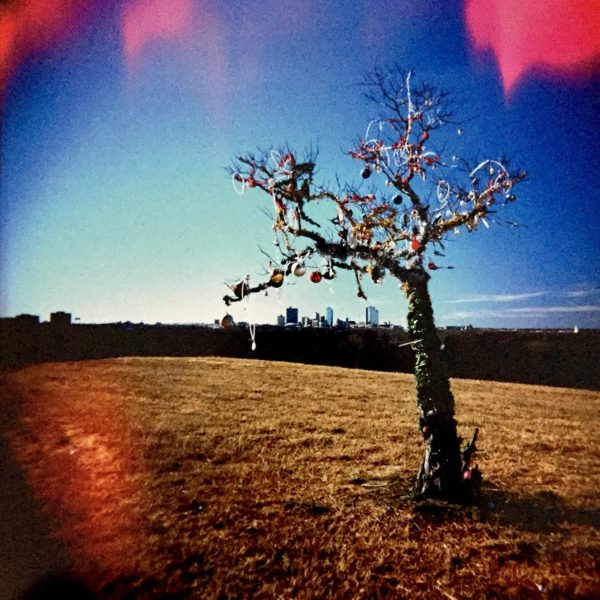 Lou Chapman sets up a landscape theme in his two photographic works, in which he obtains distorted visual effects by using a Holga camera with a fish-eye lens in Tree at Botanic Gardens, Fort Worth, or by cross processing a Holga photographic negative with chemicals that produce the red color flares in Memorial Tree Along I-30 Near Downtown. (This formerly lonely tree, by the way, eventually died from a combination of drought and the well-meaning ministrations of passersby who smothered it with ornaments and tinsel each Christmas). David Conn’s delicate linocut prints display a fastidious approach to realism in the snow-laden grasses of Sussex. 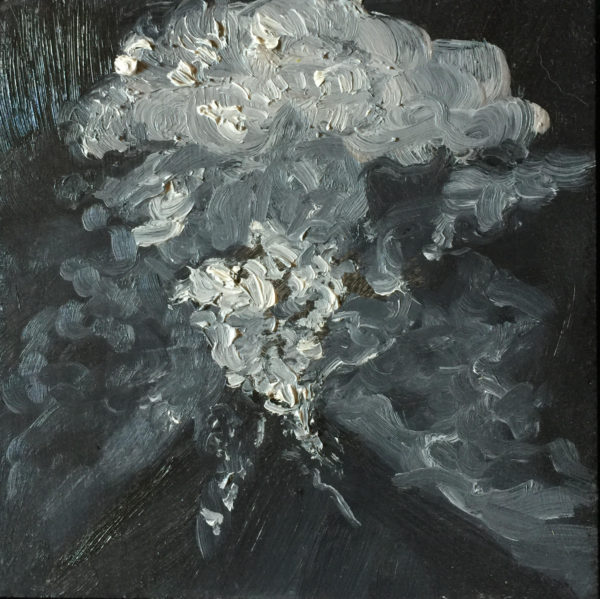 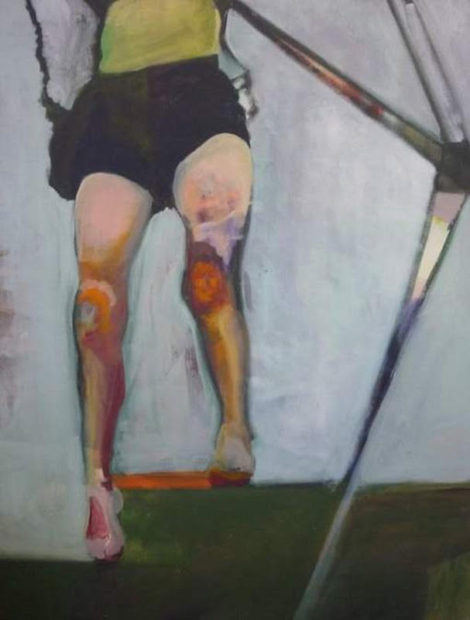 In contrast, other artists show off a more painterly approach. Rachel Bounds’ two one-foot-square black and white studies titled Volcano are painted in a sooty range of tonalities with thick impasto strokes. Ariel Davis’s Country Swing is a radically cropped figural form in which she applies translucent layers of paint to define fleshy but spindly legs. 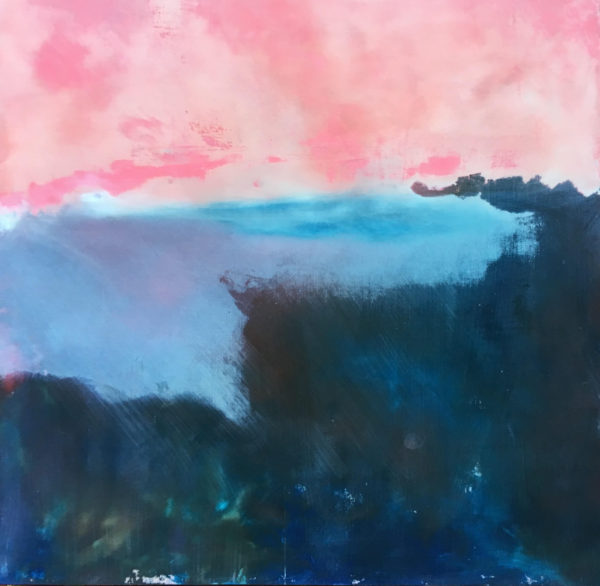 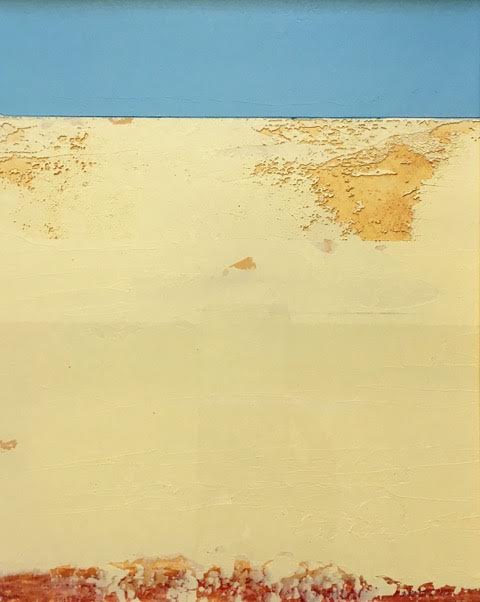 Vicki Owen achieves ephemeral effects in Luck Happens and It’s in Sight. Both oil-on-board paintings hint at landscapes in their softly blended pastel colors, but are basically abstractions. Even more reductive abstractions are provided by Lisa Cunningham in two examples from her Spring on the Mesas series, both painted with cold wax and oil on paper. Cunningham lays down rigid horizontal bands of contrasting color to evoke landscape vistas. To vary the flat colors, Cunningham drags pigmented cold wax over the surface, producing a spackling-like texture as the waxy medium breaks over the underlying oil paint. 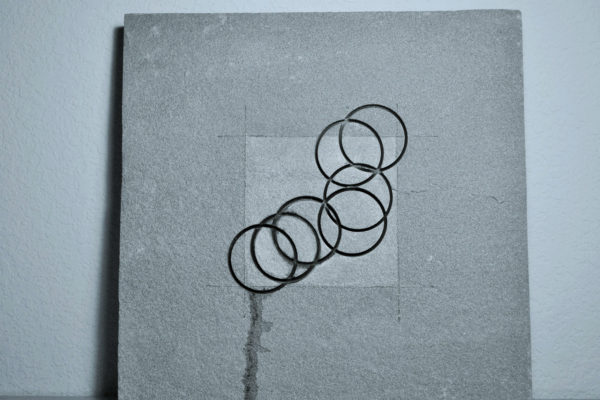 Strong graphic design characterizes Bill Barter’s oil paintings like Art without Borders, Sherry Coffey’s wool and mohair weavings, and Susan Sitzes’ stone wall sculpture No Looking Back. This piece consists of a 12-inch square of a one-and-half inch-thick chunk of Pennsylvania Blue stone with subtle surface modifications—a small square has been etched in the center of the grayish stone, creating a lighter gray area that is reinforced at the edges with colored pencil. Then several overlapping circles are drilled into the surface of the stone, forming shallow linear cuts filled in with dark watercolor paint that spills over and runs to the bottom of the piece. The interlocking overlaid circles imply movement in space on the flat surface of the stone.

Even though Gallery 76102 is a college-supported art space which primarily functions as a practicum for students enrolled in UT-Arlington’s art program, whenever guest artists are invited to fill out the exhibition schedule, better reciprocal support might be provided by the gallery in terms of helping connect these artists with potential patrons. Nonetheless, the Fort Worth art scene has been enriched by the presence of this gallery space on the east side of downtown.

Fort Worth Art Collective runs through Dec. 17 at Gallery 76102, Fort Worth.