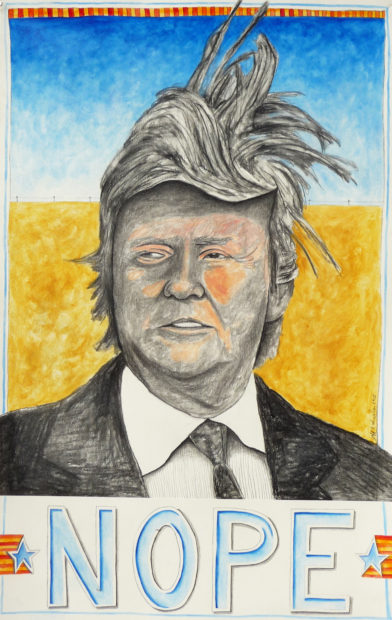 Last week, we reported that popular Texas artist Jeff Wheeler had: 1) accepted a newfound director position at James Surls’ place in Splendora, and 2) was still traveling his and his brothers’ big collaborative show called Ulterior Motifs no. 14. As of right now that group show, which boasts a number of favorite Texas artists, is up at the Arlington Museum of Art, minus a certain work meant for the exhibition.

A source told Glasstire that while Wheeler and company were installing the show in Arlington last week, a museum board member walked by a satirical, hand-drawn cartoon poster of Donald Trump by Wheeler and decided to ban it from the show. The piece is oil and charcoal on paper and is titled Nope. He produced it shortly after Trump threw his hat in this election-cycle ring. Previously, the original had been exhibited (and sold) in Lubbock, and for Arlington was on loan from its owner. Wheeler has been selling prints of the image over the past months.

The museum’s own description of the show states: “The artists represented in Ulterior Motifs #14 work in a variety of media and styles, but each contends with themes that address contemporary social, political, and ethical questions,” and writes that the exhibition is “well-suited to the Arlington Museum of Art’s continuing vision to highlight both important traveling exhibitions and contemporary Texas art.”  Hm.

The board member, who has not been identified, insisted that the piece should be banned from the show and following that the museum’s director, Chris Hightower, agreed that the piece would never get by the rest of the board. Hightower has not returned Glasstire‘s inquiry on the matter.

If this report is true, then this is outrageous. Hightower should be fired immediately and the other board members should immediately remove the “unidentified” board member who is responsible.

This work is completely harmless. Regardless of his political views, Jeff Wheeler is well within his Constitutional rights to hang and display this work. Holy shit, people. This is an illegal act. The Arlington Museum is playing with fire. A lawsuit could crush them, and if this situation is not reversed, then it should.

That’s just silly. He’s most certainly within his rights to hang and display his work, but that’s not at issue. The question is whether he can display his work _in_that_gallery_ and he has no constitutional right to do that.

Chris is a good dude, but he has to deal with what he’s given board-wise. Something similar happened when I was at UTA back in the day and a similar decision was reached. Unfortunately, the AMA is supported by people who have money but no sense of humor.

I would like to point out that the article makes no mention of the fact that the AMA is a non-profit and therefore cannot legally post or condone work that would directly or indirectly be viewed as a political stance or they risk losing their 501(c)(3) title. None of the other pieces in this exhibit that I saw carry any political tone such as the one piece that was not put on display. Directly from the IRS: https://www.irs.gov/charities-non-profits/charitable-organizations/exemption-requirements-section-501-c-3-organizations

As the executive director of a 501(c)3 non-profit, I assure you, you’re wrong. Exhibiting artwork with political content is not the same thing as “participating in any campaign activity.” If that were the case, hundreds of art exhibitions (to say nothing of theatrical and musical performances) around the country would be shut down every year.

So then isn’t it within the right of a director to choose to display a piece-especially during an election year where one of the candidates is featured, so as to not risk any semblance of stance on a political campaign? The definition is loose so you can’t say if this would or wouldn’t be considered though I’d imagine Trump supporters would cause an uproar over this piece and turn it into a political issue. Also, I’m just curious, what non profit are you the director for? It just might not be an issue for your particular arena.

There is a functional difference between “risk[ing] any semblance of a stance on a political campaign,” and
“participating in any campaign activity.” Exhibiting artwork that is politically charged just doesn’t fall under the umbrella of participating in campaign activity, which actually isn’t all that loose of a description if you’re familiar with the language. I believe that’s, partly at least, Rainey’s point.

The director is within his rights to reject the piece but he’d not be in violation of the law to display it either. I think the larger issue is not what is permissible but what is advisable. The range of political points of view which get represented by artwork in galleries and exhibitions doesn’t even come close to representing the population at large. As long as it’s the case both that the world of fine art is dependent upon public funding and that it lacks balance in the ideological messages it’s willing to promote, it ought to be apolitical.

Not risking any semblance of stance – sounds like pretty wimpy art.

I honestly don’t feel I have enough information to assess the situation. What other work is in the show? How much is political? (Apparently none?) Was any other work not exhibited? Banning is different than simply being left out curatorially, though it’s the same result. I wonder if the wording is from the ‘source’ or if there is written communication between the museum and artist. Does the museum/Hightower have a history of letting their board make these sort of decisions after accepting or inviting shows to exhibit? Have they exhibited political work in the past? Questions like that.

Wheeler’s art is probably getting more attention posted here than mounted in the exhibit, but this already art inclined (hopefully open minded) audience isn’t the group that needs to see it.

She’s a writer, and an editor, and the director of Glasstire (we’re here!), so it’s an art arena. Here’s a link to some more writing by Knudson which elaborates on this whole ‘offensive art’ thing and why it’s important to keep making it, showing it, and talking about it. https://glasstire.com/2015/12/06/the-best-defense-is-good-offensiveness/

To add to the previous responses: Caitlin has conflated two separate issues here.

1. The first is whether the IRS can revoke the 501(c)3 status of an art organization for displaying/performing work with political content. It cannot. It *can* revoke the status for what are called lobbying activities. It’s perfectly OK to show art that criticizes or satirizes a political candidate, under the robust protection of political speech in the First Amendment. On the other hand it’s *not* OK to email your audience advocating, for example, that they vote for a certain candidate. [What the IRS cares about is not a small museum showing a satirical artwork of a candidate. They care about millions of dollars of campaign donations iffily being written off as tax donations to so-called “charities” that are really just SuperPACs by another name.]

2. Obviously, any nonprofit art space can choose to show any artwork it wants to. A board member asking a work be taken down because they object to its political content is perfectly within their legal rights, and the director of the space is within his rights to comply or not comply as he sees fit. The issue isn’t whether they’re in a legal safe zone. The issue is what appears to be an inappropriate overstepping of bounds by someone who we can presume has some level of fiscal stake in the museum and is using that leverage to remove artwork they personally object to. Good board members don’t do that. Without knowing any of the details of this situation, I’m guessing the director had the choice of a) complying with the board member who asked for the work to be taken down; b) discreetly bringing the issue to the rest of the board and having a conversation about what they want the museum to be and how they, as a group and individually, want to conduct themselves; or c) telling the board member to go stick it where the sun doesn’t shine. The outcome (the director chose option A) has set a bad precedent and damaged the reputation of the museum. Most readers probably never thought about the Arlington Museum of Art much before now–but they’ll remember this dumb episode for a while.

Trump is low hanging fruit. It’s lazy. Just quit it. I know he makes your lefty bones just quiver with anger and you want to shout some statement about how bad he is, but when you do it with your “art” it comes off as amateur. While art shouldn’t be censored, I can’t feel that bad when lazy art gets taken off the wall. Big shrug. Leave the “statements” for your bumper stickers.

Mr. Hightower has done a GREAT job with the troubled AMA. They had both zero money and huge debt. By the way, he IS a Democrat/Leftist/Prog whatever term you want to use. He has ran for office as such and his mother was elected as a Democrat.

As the token ‘Glasstire conservative/libertarian and Proud 2016 Trump Voter’, I am not offended by the art. Other than the fact it is not very good art. Bad art does offends me.

This is probably some of the best possible publicity there is for this show. This artwork is probably getting more attention now than it would have actually gotten if it were to remain hanging. It is kind of silly though…I can’t even began to imagine how many Trump supporters have donated money to the AMA. I guess it’s better to be safe than sorry.