This is Tapanga Jansen, a San Antonio video and social networking artist.

I’m a big fan of her idiosyncratic, deliberately lo-fi, subversively sophisticated short videos, as well as her penchant for speaking in all LOLCats-style pidgin.

As you can see, Tapanga works in a customer service call center with Holly, a chirpy doll’s head, a voiceless customer service operator named Doretha, pretentious irritant Blair (whose band Lachrymosis has its own myspace page btw) and Stacey, a heinous, condescending bowhead boss. Tapanga’s universe is partially a workplace comedy, but subverted entirely via the POV of the crazy cat lady spinster freak who’s so often the butt of workplace comedy. In this metaverse, the 40something cat lady is the unsinkable hero and emotional center.

Not all of Tapanga’s pieces are as long as “Where’s Lori,” with some videos focusing on the Tapanga aesthetic rather than narrative twists. Note her “July Forf 2011” (2011)

The visual texture of Tapanga Jansen’s films fascinates, suggesting as it does a non-linear video process; you can almost tell how she’s putting it together… but not quite. I like the juxtaposition of the dizzier, slightly dated graphic elements — like the trippy GIFs  – and Jansen’s arresting, slightly monstrous photography montage character design. Jansen’s expanding cast of oppressed, bizarre or “stupids” characters assail her and us like some digital-age Hogarth lithographs, particularly in the “Customer Service with Doretha” series (2011)

I also like the semi-episodic format, fast edits and the consistent, stark yet chirpy intro/outro.

The codified dialogue is genius, a mix of asinine  “you stupids,” corporate-speak, or the utterly absurd, with most of the supporting characters exhibiting a John Waters-like codified delivery, particularly Blair’s nasal scowl of a voice. 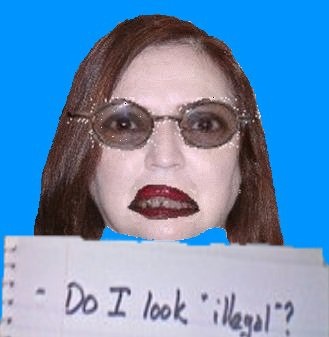 Tapanga takes a stand. No apologies.

One of the reason Tapanga and co. resonate with me is their barely suppressable rage. Anybody who’s worked in a service industry — anybody who feels trampled and let down and as though they’re drained by their dayjob — can empathize.

Also, the fact that she tends to post videos to Facebook during the workday is genius. They’re short, punchy, mad, and weirdly sympathetic. They have impact. The videos of Tapanga Jansen don’t look or sound like anything else that’ll flit past your eyeballs all day. Also, she’s canny in using the omnipresent social networking site a way to give herself more presence and dimension; it’s always interesting to note her comments; her phonetic spellings of some words alone are enough to crack me up.

All the details matter. A seemingly random bit part character, a “crackhead” named Carmen, maintains an undertone of pathos and an overtone of satirized pathos, of crackhead as comic relief as a trope:

A  dead-end job in a vast corporatesphere, where the American struggles of class and gender play themselves out, requires these little bursts of human-made imperfection. The impression is of art made quickly and earnestly with imagination and whatever materials, technologically, Tapanga Jansen finds at hand, or is able to master.

I like her energy and her anger, and her insistence, via her brand-naming, on loving you. Is she being sarcastic about love? I don’t think it’s that simple. Somehow, Tapanga the character doesn’t come off cynical. Tapanga’s both grouchy and hopeful, in her  three dimensional world of true peculiarity. 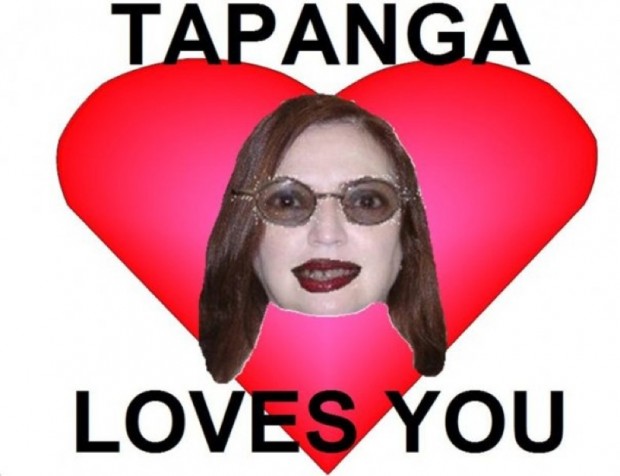 Walt Whitman-like in relation to her audience.

She’s on summer vacay right now, but she tells me she’s got new vids in the works.

For more on Tapanga Jansen:

Look at her YouTube channel (check out that background wallpapaer!)

And check out her blog

This is so incredibly ridiculous. It may be a fun inside joke among a certain few in the SA arts community, but please don’t post this on a site where people come to seriously inquire about exhibitions around the area. This is all around obnoxious, and an awful representation of what SA art writers should be highlighting on Glasstire. I’m embarrassed that this shows up under San Antonio’s recent posts.

At best, this belongs on Adult Swim, not a website for adults.

Yes, because something absurd, or silly, or even funny can’t be real art, right guys? I mean, we know what REAL art is like, right?

Grantley, who said art can’t be absurd, silly or funny? If that’s what you felt when watching these videos then I would question your sense of humor and wit as much as your ability to determine art.

To the contrary, she is doing work that actually makes San Antonio art seem relevant in the present tense: for point of reference, the Ryan Trecartin show at MoMA PS 1 in New York.

As far as Adult Swim… Paper Rad now has a show on that channel.

The precedents are established. If anything, Tapanga is a little late to the party. You might not believe this is good art, but it is definitely art and indisputably engaging.

Thank you Adult Swim for giving Paper Rad a show. Now I can form an opinion on art based off your late night broadcast line up.

Thank you MoMA for giving Ryan Trecartin a show. Now I can tell what is indisputably engaging.

You’re right though San Antonio is very relevant and this article is not helping that cause.

Please stick to sterile, academic work. If it produces a reaction, then it resonates at some level and I don’t care for that.

This is 21st century folk art and belongs in some other category. Please narrow in on rarified, ponderous and irrelevant work that only other art school graduates pretend to understand.

Categorizing this as the opposite of “academic work” I feel is irrelevant. I could care less if an artist wants to be identified as self-taught or academic. This does not justify quality work or relevance one way or another. Give me quality, not quantity. Quantity is what seems to plague the San Antonio art scene.

I think the best art is art that doesn’t shake your hand, slap you in the face, and then say, “Hi. I’m art.” Art should elicit a reaction before a definition. And apparently everyone here has a distinct reaction to Tapanga. Me? I love her. She is performance artist/cultural satirist/digital collage artist all in one. Maybe you don’t dig her. But she loves you. So, people in Glass Tire, don’t throw stones.

Don’t throw stones? I thought that was the point of art?

No, Mr. Alex, even though Miss Tapanga is supposedly a real artist, we must remember to give her the kid glove treatment. You sound like a mean old college student.

right back at ya san antonio-

Since you’ve found me out as mediocre (tried to hide it as best I could), perhaps you’d care to elaborate (rather than snipe from the sidelines) on what is “creative” and “original” about a style of work that’s been around since the late nineties. If this is art, if this is really fresh and innovative, why not “Hamster Dance,” “Badger-Badger-Mushroom,” and “Peanut Butter Jelly Time?” I’m not being facetious, by the way. I am literally asking why not the viral “hits” (for lack of a better term) that started it all? Or is it simply that now, what was once the mere hobbyist now sees his opportunity to demand a seat at the big table? If it’s an “anti-art” statement, somehow I’m not buying that Miss Tapanga is the next Hugo Ball.

Good for this hot Summer: it leaves me cold!

I agree with Rebecca that art should elicit a reaction before a definition. Though I do not agree with her that this is cultural satire. Performance? Yes. Digital collage? Yes. Easily executed? Yes. All of which are perfectly acceptable when categorizing something that is or isn’t “art”. But this does not produce cultural satire that transcends beyond a simple inside joke among the SA art community, specifically those on following along Facebook.

What I care to discuss is whether or not an inside joke can actually be significant. I think it’s great that people are throwing stones. I love that, for once in this town, we are starting to see differing opinions and starting a real conversation. Art isn’t one-sided. Art is, essentially, whatever we say it is. Some people will thoroughly disagree that this is art, while some people will jump on the bandwagon and say “oh my goodness — what a refreshingly unacademic gesture.”

All in all, this medium and concept as PEN discussed is very much a part of contemporary art, but what sets Ryan Trecartin apart from Tapanga’s internet presence is it’s significance to a wider audience, not to just a select few.

Exploring and experimenting in New Media for years, I can say that this work leaves me wanting more. Not more in the way of meaning… but I want it to evoke some sort of reaction, response, or emotion, as I currently feel nothing in regards to this, it’s just… there. It was created, and there it is. I’m not angry that it was made, I don’t feel threatened by it, I don’t feel as if it’s pushing originality or creativity, nor do I feel it is questioning art and authorship itself. It is just there. Just there.

What brings me to comment here is more of the want for a conversation to arise over why it does or does not strike a chord with you. It’s a person investigation as to why this evokes no response from me, yet a handful of opposing responses from each of you.

Right, because the only alternative to this would *have* to be sterile, anemic, and coded to where only the stuffiest of ivory-tower academics could appreciate. Please. This type of knee-jerk response is so tinged with the very same categorical thinking it aims to dismiss that I wonder whether it’s all part of the larger joke. While art should be accessible, accessibility alone does not make art. Once *anything* can be called art, the term is meaningless. Which, if you’re *really* aiming to neutralize the term, is fine. But don’t defend it as “art” in the same sentence.

But, it if makes one feel better, go ahead. Label all detractors as irrelevant scholars. Toss around buzzwords that take up space but communicate nothing whatsoever. Wrap yourselves in the idea that just because something refuses to adapt to standards that this alone makes it worthwhile. Because all standards are the work of stodgy old pipe-smoking professors, right? Well, I’ll consider myself schooled, then. Thanks for enlightening.

By the way, no one here has (so far, at least) suggested that art, even “high art,” (which is apparently anathema to some of the “too cool for school” hipsters rushing to cry foul on here) *can’t* be “silly or absurd.” Even the much-loathed academic wouldn’t try to argue that. (See Samuel Beckett, Thomas Pynchon, or Edward Albee, to name a few. I would even argue that Groucho Marx is an “artist” in a certain sense. The difference is that they did it *well*) What I *am* saying is that absurdity alone does not, by sheer virtue of its non-conformity, make art. It’s very telling that Tapanga’s critics are apparently held to a much tougher scrutiny than her fans. Fans may just “feel it” and leave it at that. But those who don’t “feel it” must either by jealous, “mediocre” (great buzzword by the way), or have been brainwashed by intellectual elitists — there’s no other explanation! (By the way, I haven’t spent a day in art school. I am, by definition, the casual viewer. My opinion that this work is at worst juvenile and at best simply underwhelming is the purest of “emotional” reactions. Straight from the gut, folks.)