Since January 20th, Houston has played host to a number of anti-Trump art exhibitions, many of which have been boisterous statements that begged for media attention and not much more. The Huffington Post wrote about Trump! The Art Show’s indictment of the president, which contained, as they put it, “some of Texas’ finest protest-art.” 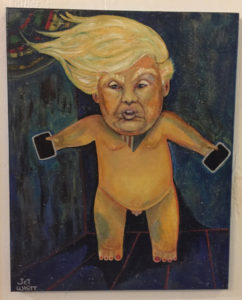 From a drooling, ball-gagged Trump, to a dual phone wielding troll doll, artists in that show attempted to dehumanize our new president and depict him as an impotent and pathetic object. But that’s not the whole picture these days. Like it or not, Trump is the most powerful person on Earth right now. Even with daily upheavals, his staff incessantly flailing, and his approval ratings constantly “hitting new lows,” he’s the president of the United States of America and has the power that comes with the title. It raises the question for an artist: How do you make politically defiant art that criticizes the facets of Trump you despise while at the same time recognizing that he is not a powerless blob?

San Antonio-based artist Michael Menchaca’s exhibition Xenelasy and Dissension, on view at BLUEorange in Houston, is one good answer. I assumed from its title the show would be political, (xenelasia was the Spartan custom of expelling foreigners from its city-state), and Menchaca did not disappoint. Drawing on imagery from Mesoamerican codices, the artist creates meticulously crafted screenprints, digital prints, and videos that contain complex narratives commenting on our sociopolitical moment. Menchaca’s strength is that he communicates these critiques through animated GIF-like videos and images that recall arcade video games—a language that doesn’t naturally carry immediate clout—that saves it from feeling didactic or heavy-handed. At the same time, he doesn’t pull his punches. 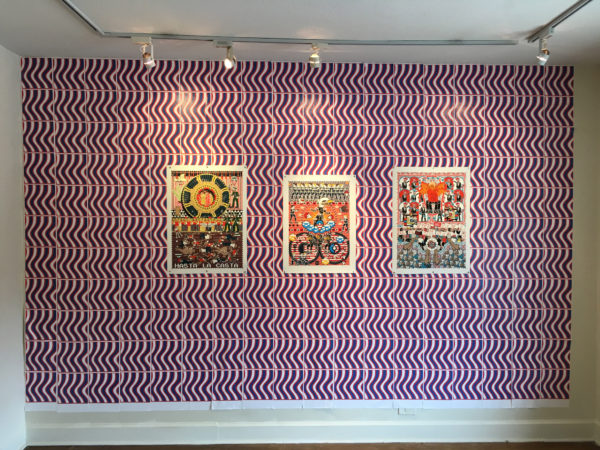 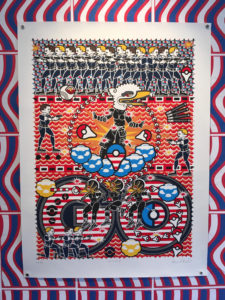 The strongest pieces in the exhibition are two wall installations, one of which is comprised of a screen print and two digital prints hung atop red, white, and blue printed paper. The whole scene is unnervingly patriotic and becomes even more so once you dissect Menchaca’s imagery: one print shows the inauguration of a winged, four-legged, orange-skinned Trump, and a subsequent pussy-hat protest in which the characters can’t seem to agree on a message. Another, reading “Hasta La Casta” in 8-bit letters, shows a group of cat figures in a spiraling shape evoking the Sun Stone while other explorer types come in and disrupt the scene in a colonial fashion. A third print comments on police brutality through an army of cops walking with their guns drawn. This image is adorned with Poké Ball ornamentations and is macabrely titled Gotta Catch Em All, clearly jabbing at the ever-expanding list of people of color targeted by police. In all three of these works, Menchaca finds a way to pinpoint some of the reprehensible hallmarks of our country: America can’t escape its colonial heritage; there is a dangerous person in power; black and brown lives don’t matter. 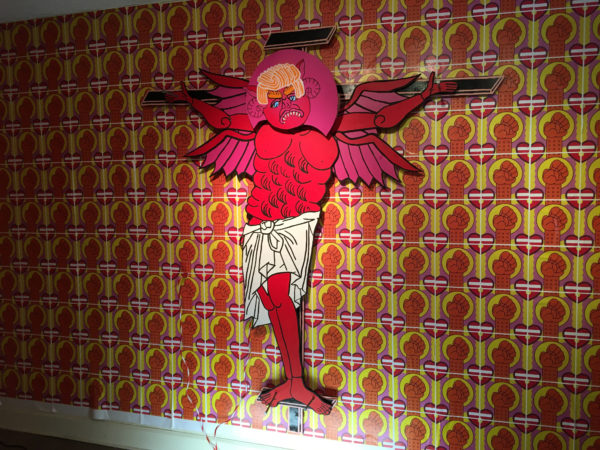 The second installation finds a way around the problems of making political art that ignores Trump’s ascendancy. Christ as Trump is a multi-media wall installation that shows a devil-like version of our president crucified on a cross laid on top of a background of printed raised fists of resistance. The figure does not have human eyes—instead, his sockets are flickering videos of white, black, and orange lines that grant the sagging body some vigor. Trump’s torso lacks a wound; perhaps the Holy Lance has not yet arrived as his body struggles to hold on. Unfortunately, even if Trump is already dead, this isn’t the end of his story. Remember: the crucifixion wasn’t the last we saw of Christ. As does Trump’s teachings can permeate the land, and a faction of those who believe in him can carry a resolve that has them ignoring anything that might raise a shred of doubt. Showing Trump in place of Christ is a forceful gesture that pops our art-world bubble, and drops us into the “real world”—a world where people revere Trump and don’t downplay or doubt his authority.

You can only resist something worthy of resisting. If we joke around and see Trump only as a toddler refusing to open his mouth for a spoonful of peas, we are doing ourselves a disservice, because he is more than that. Trump is a wolf, a predator. While Menchaca’s installations are a step toward uncovering Trump’s predator within, all artists and writers could take a hint from him and find new ways of depicting the all-too-real and all-too-powerful threats our nation encounters daily. This is not an indictment on humor or irony—I am a big believer that we need levity to maintain our sanity—but at the end of the day, memes aren’t enough when you’re dealing with sweeping, unadulterated power.