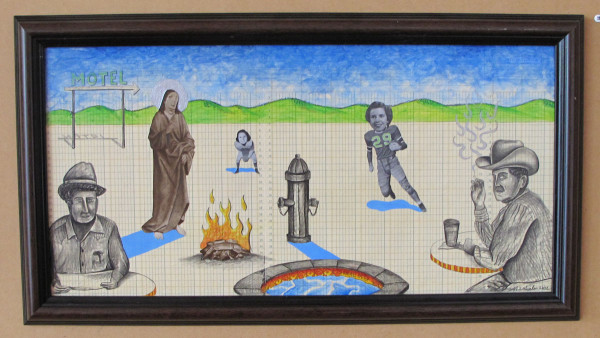 Culled from over 300 works made in the last year and a half, 43 of Jeffrey Wheeler’s latest paintings, collages, drawings, and ceramics at G Gallery continue his established style and add new experiments in abstraction.

About twenty of Wheeler’s smaller works are crammed onto a single wall, their salon-style presentation mimicking the loose grid of collaged elements within the works. Many present typical Wheeler motifs – the deep blue and burnt sienna horizons of West Texas, Motel 6s and lonesome silos. In Somewhere Near Happy Texas 2, the foreground is constructed of vintage graph paper, which meshes perfectly with Wheeler’s signature wispy blue skies and motel signs. Gathered around a reflective round swimming pool (another Wheeler trope) are charcoal drawings of weary and bemused cowboys, crisp black-and-white yearbook photos of football players in action with their faces replaced with faces of sweet young ladies, and a print of a robed prophet whose face is again covered by a photograph of a child from another time and place. His standard West Texan stage is transformed into a dreamy environment where these characters can intermingle, transcending logical space and time. The vintage graph paper adds levity to the piece; although perhaps it isn’t logical as a landscape foreground, it feels like a document, recording the evidence of the nonsensical meeting. 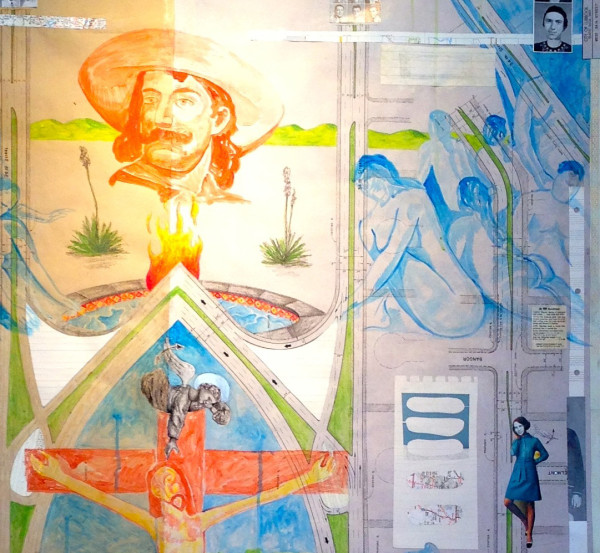 Here We Are (detail)

Wheeler pushes the concept of commingling forms further in his larger collages. Here We Are incorporates yearbook-like photos with male faces on female bodies, partially cut out paper dolls, sewing patterns, and pages from a book called Health and Good Form covered with abstract charcoal sketches. These elements, all associated with femininity and altered in a slightly jarring manner, comically underscore the complexity, and often futility, of defining sex. Drawings in oil crayon of recognizable characters from famous historical paintings are layered over the bodies: Gauguin’s The Yellow Christ, Cezanne’s The Bathers, Millet’s The Gleaners appear as friendly ghosts, their forms perfectly framed by the collage of vintage road maps.

Wheeler isn’t necessarily comparing himself to these great artists, but is including them in his own artistic conversation among the other “Actual Scenes, Genuine Characters” he promises in the text. Actual people, represented by the yearbook photos, are juxtaposed with the accepted and admired characters of art history as Wheeler confronts canonical artists with his questions of regional identity. 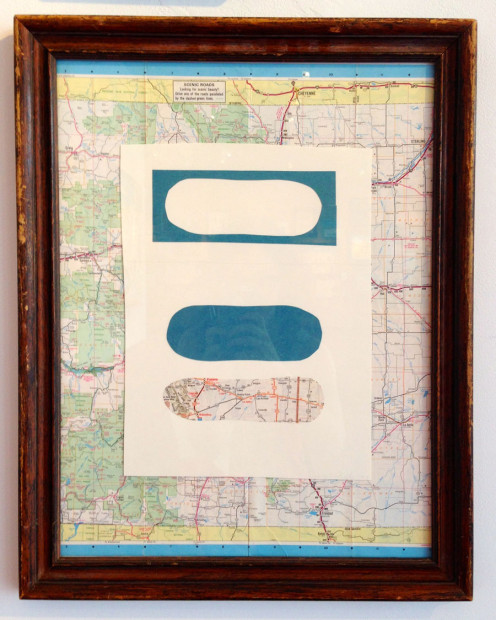 Wheeler completely departs from representation with his Taos Series, and the Idalou Series, a few dozen tiny abstract collages made from the debris of his other studio work during a single day in Taos last summer. Perhaps nodding to Dadaist automatic collages, in these works, Wheeler takes a minimal approach. Abandoning his preoccupations with art historical icons, identity confusion, and religious symbols, Wheeler uses just a few elements to create a calm, organized arrangements recalling Sophie Taeuber’s work on paper: automatic, geometric, and gracefully beautiful. Without Wheeler’s bold text and clearly articulated iconography, they work a little harder to evoke ideas of expansive space and a Texan homeland. Even so, with expertly placed cuts of colored or sketched-upon paper, the feeling of arid environments and the rhythms of Western life come through.

In this show, Wheeler investigates familiar ideas and methods with an entirely new lens, investigating how art historical memory works, by both confronting it head on and gently gesturing towards it with his abstract works, unprecedented in his own oeuvre. 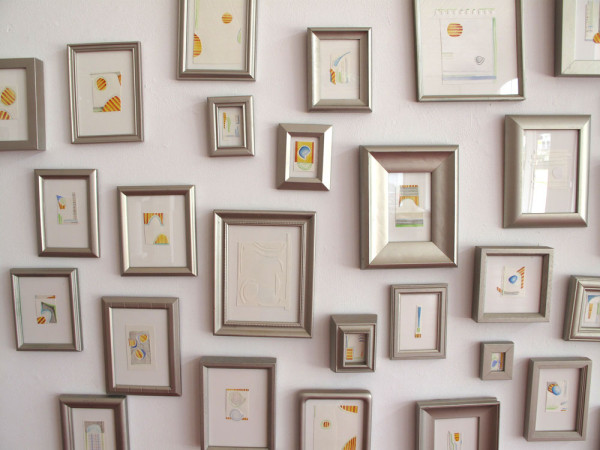 Artists and Collectors to Show off their Weird...