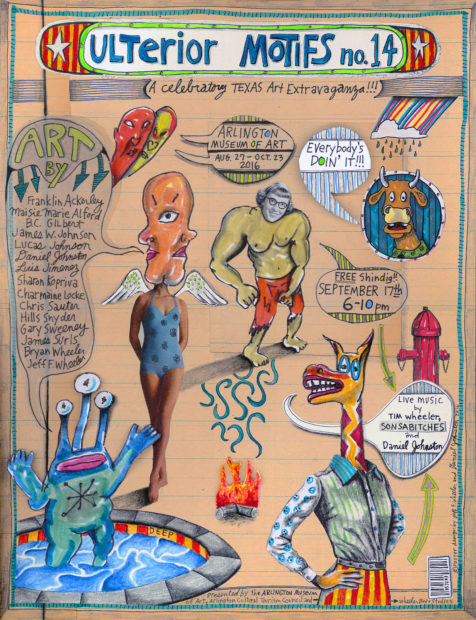 Jeffrey Wheeler, pioneer and mentor artist of Lubbock, announced this last spring that he’d be picking up sticks to head elsewhere in Texas, but at the time it was still a mystery as to where he was headed. Meanwhile Jeff and his brother Brian launched the 14th installment under their collaborative, ongoing (and traveling) Ulterior Motifs series of group shows (which began in 1999 and feature Texas artists), and… more on that in a sec.

Jeff Wheeler will take on the title of Co-Director of the legendary studio compound owned by James Surls and Charmaine Locke in Splendora (about an hour northeast of Houston), called Splendora Gardens, and he’ll run it alongside their daughter Ruby. They will revive “…the studio as an art and music destination with plans for workshops, lectures, and eventually artist residencies, and a collecting museum.” The Splendora operation mostly wound down in the late ’90s when Surls and Locke moved to Colorado, but for 20 years it had been the site of Surls’ main studio as well as countless events and artist-led parties and gatherings legendary in the Houston art scene and beyond.

The grand re-opening of the studio (a 12,000 sf space set on 177 acres) happens on November 12th and 13th. The inaugural show is the above-mentioned Wheeler brothers’ Ulterior Motifs No. 14: A Celebratory Texas Art Extravaganza (which in the meantime opened last week at the Arlington Museum of Art). It’s a highly collaborative show featuring 15 artists, including Surls and Locke, and there will be live bands (TBA) on the opening on the 12th, and then November 13th “will be a special event as James and Charmaine will host an old-school potluck lunch, talk about their time out here, and then introduce a new documentary about James. The whole weekend celebrates the 40th year since James and Charmaine moved out [t]here and at the same time looks ahead and celebrates its rebirth and an art and music destination.”

Congrats to Wheeler and the Surls/Locke clan, and we look forward to this re-launch! Keep an eye on Glasstire Events for details.

For some Wheeler love before then, the Ulterior Motifs No. 14 show that’s up at the Arlington Museum of Art will have a “big opening hootenanny” on September 17th. There will be live music featuring Tim Wheeler, the legendary Daniel Johnston (whose artwork is also featured in the show and is a frequent Wheeler collaborator), and the band Los Sonsabitches.

Hello from Arlington, TX! I’m enjoying your articles so far, and the user friendly website is superb.
So I’ve recently discovered Jeff F. Wheeler and his amigos at UM14 at the AMA downtown and loved it. So much so, that I’ve decided to use one of his works for my art paper at Tarrant County College. I would like to cite your https://glasstire.com/2016/09/01/jeff-wheeler-named-co-director-of-james-surls-multi-purpose-art-space/ BUT I CANT FIND THE AUTHOR!!!!! Please email me if at all possible! Thank you so much!

Our staff all participates in writing short news bits and we don’t assign our names to them. You’ll just have to put “Glasstire” as the author. Thanks for reading!