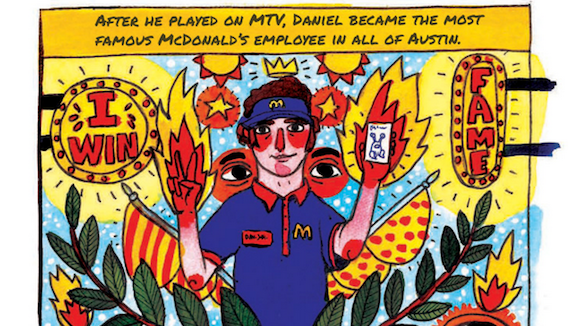 Earlier this month, the graphic novel, The Incantations of Daniel Johnston, was published. A collaboration between Spanish artist Ricardo Cavolo and award-winning author Scott McClanahan, the book has received mostly positive and flabbergasted reviews.

“As biographical graphic novels go, you’ve never read anything like The Incantations Of Daniel Johnston, a poetic, frenetic dive through the mind of the singer/songwriter, using it as a filter through which the larger strokes of his life are presented. What results is unstable, sympathetic, confused, and damned.”
—John Seven, Comics Beat

“Something wholly unexpected, grotesque, and poignant.”
—Will Stephenson, The Fader

Cavolo was first introduced to Daniel Johnston through his art: “I have to say — I love his music, it is so special, but I really fell in love with his drawings.” The West Virginia (where Johnston grew up) cult author McClanahan seems to be a perfect fit to write about the songwriter/artist Johnston. The book’s publisher, Two Dollar Radio, notes that, “McClanahan manages to deal with powerful and complex issues, such as how we as a society mythologize troubled artists, while continuing his ongoing exploration of human relationships, and the pliable interaction between reader and writer.”