The holidays can very stressful for many folks and provoke behavior that is not quite in the Christmas spirit. For those who had a spat with a loved one or sulked because they didn’t get that pony they asked for, go ahead and apologize and just be thankful there were no arrests in involved, as there was for 32-year-old Austinite Rebecca Guest. As reported by KXAN, she spent her Christmas Eve with a spray paint can, writing profanities across the iconic “alien frog” mural at 21st and Guadalupe Streets. 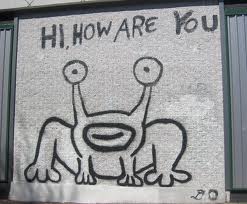 According to arrest reports, Guest believed that the 20-year-old mural painted by musician/artist Daniel Johnston was offensive and meant to insult her personally. Originally commissioned by Sound Exchange, the record store at that location at the time, the mural’s image came from Johnston’s 1983 record album (or, more likely, a homemade cassette tape) cover, which was made famous when the image was printed on a t-shirt worn by Kurt Cobain during promotional appearances for Nirvana’s Nevermind album. The frog, also known as “Jeremiah the Innocent,” was almost painted over when new tenants moved in, but in 2004, a neighborhood coalition convinced them to keep the mural intact. In 2006, Johnston’s local cult status grew to mega-cult status with the release of award-winning documentary The Devil and Daniel Johnston.

The defacement doesn’t seem be destined to become just a holiday tradition, as the police report also stated that Guest has spent several hundred dollars in the past year painting obscenities on other area murals which were also insulting her. The building manager estimates the restoration costs will be up to $1,000.