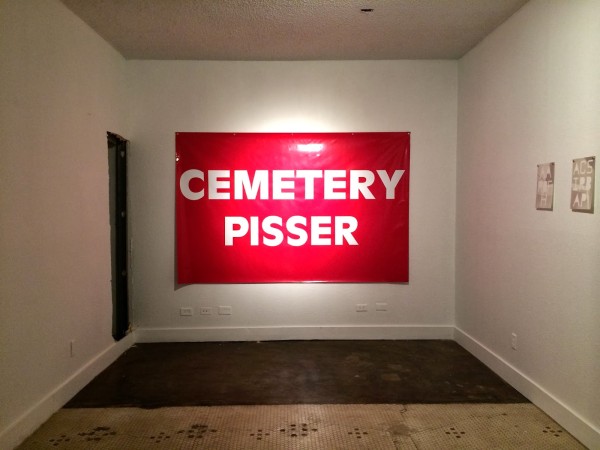 I rolled into Dallas late afternoon on Saturday without much of a plan on how the evening would unfold. I hadn’t been to Dallas because I am still relatively new to Texas, but I’ve heard nothing but amazing things about our northern neighbors, and know many great artists living and working there. As it happens, many of the city’s project spaces and galleries had their openings on this very night. It was also the beginning of the Dallas Biennial, or DB14.

The Dallas Biennial is an non-profit artist-run biennial directed by artists Michael Mazurek and Jesse Morgan Barnett. It started in 2012 as an Internet-based set of exhibitions, and now the Biennial is expanding into the flesh and onto the streets, featuring over 50 national and international artists at over a dozen locations.

At the Berlin Biennale 2006, Maurizio Cattelan, Massimiliano Gioni, and Ali Subotnick, working collectively as the Wrong Gallery, chose 12 venues, most of them along Auguststraße, taking on city-wide involvement like that of Documenta in Kassel, Germany. Like the current Dallas Biennial, Berlin had chosen not just institutions and galleries, but unconventional exhibition spaces such as a cemetery and storefronts. It is great to see an institution host a city’s Biennial, but I really enjoy this model. 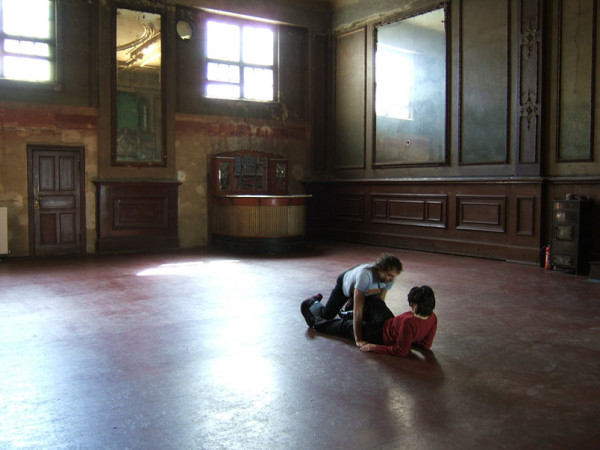 It’s a citywide affair! I was eager to hit the streets to see of it what I could. Not only does it challenge the viewer on ways to encounter art, but also it challenges the curators and the artists on how to present it, making the works more site-specific. As the New York Times said of the Berlin Biennial, “Art fits anywhere.”

Dallas has an outstanding vibe that has taken off in the last few years. The artists and spaces seem to be working together. I’m not trying to make Dallas sound like it’s a free love, crash on-my-couch-anytime kind of city, but an arts community that understands the importance of a collective vision—admirable and refreshing. My lovely hosts Sally Glass and Jeff Gibbons, are both artists-in-residence at UTD’s CentralTrak, and both part of the Biennial. Jeff has a solo show at CentralTrak and Sally is the editor of the art magazine Semigloss. I knew I’d be in good hands.

There were many openings and talks Saturday night, some part of DB14 and some not. The Reading Room, The Wilcox Space, and Art Beef’s Beefhaus are all within walking distance of one another on Exposition, or just off of it. It was chilly, yet there were hordes of people out.

The Reading Room is a small project space founded and directed by Karen Weiner that presents performance, readings, exhibitions, and installations, focusing on the realm in which text and image interact. The Reading Room was surprisingly not on the DB14 list of venues, although they were part of the Texas Biennial last year.

There was already a large crowd on the street in front of the gallery where we ran into more CentralTrak residents, DB14 artists, and Houston’s own talented Emily Peacock, visiting Dallas as part of a collaboration, scheduled to begin in May, between CentralTrak’s artists-in-residence and Lawndale Art Center’s own residency program. She was already deep into ideas with collaborator Jeff Gibbons, so I figured it was best to get inside and see the show.

The Reading Room was presenting never to be yourself and yet always – that is the problem, a project by (wo)manorial, curated by Lilia Kudelia and Daria Prydybailo. 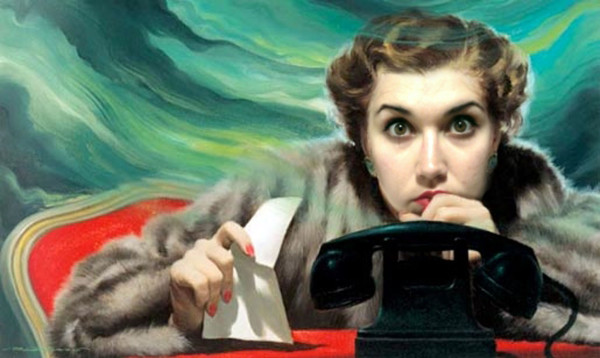 Gabriela Ochoa, Me in the Telephone Call by Robert Harris, 2013. Digital Photo Collage. Courtesy of The Reading Room

The first pieces that drew my eye were the works of Oregon artist Gabriela Ochoa. Ochoa inserts images of herself into works found online, i.e. an illustration by Robert G Harris, a portrait by Xavier Fabre, and one of John Currin’s women. Her statement explains that her digital collages explore performance through social media, but these works seem to comment more on gender roles as presented by past painters and illustrators. I’m not a fan of most digital collage but these seem to work: the patchwork was seamless and crisp. From a distance you think they are paintings and then again photographs, thus bringing you in to investigate more closely. They were vibrant and maintained a serious Cindy Sherman ambiance that left me wanting to see more.

The exhibition included some great pieces, but was crowded with a mixed grab bag of curatorial ideas. (wo)manorial didn’t tackle any new issues, and I found the explanation to be extremely broad. I purchased a copy of Semigloss and made my way on to the Wilcox Space.

The Wilcox Space came about in 2012 after the passing of Dallas artist John Wilcox. His brother, David Wilcox and a group of supporters refurbished his studio in spring 2013. The new space is more a living memorial to Wilcox’s life and work than an everyday exhibition space.

The new show, Selected Works from 1980 to 1983, was curated by Rick Bretell and is the second Wilcox installment, the first being curated by Dallas gallerist Barry Whistler. The crowd in the beautiful and spacious space was a collection of old guard and new guard Dallas. Barry Whistler was there and he was excited to show this collection and to present the work and space once again—as he should be; the remodeled museum-quality studio perfectly presents Wilcox’s works. His neo-minimalism series are very lush in texture. The color choices and mark-making were not unlike Paul Klee, and reminded me a lot of Forrest Bess with his mark and symbol codes. Falling in between postwar abstraction and the color field paintings of the 40s and 50s, Wilcox’s attention to visual tension is solid and creates a vibrant push and pull, creating depth and flatness simultaneously. Playfully jumping from surface subject matter in his early eighties works, Wilcox clinches his relationship with the canvas and preserves the dialog of painting as painting. I reunited with my host and headed onto the first official DB14 space and event of the evening. 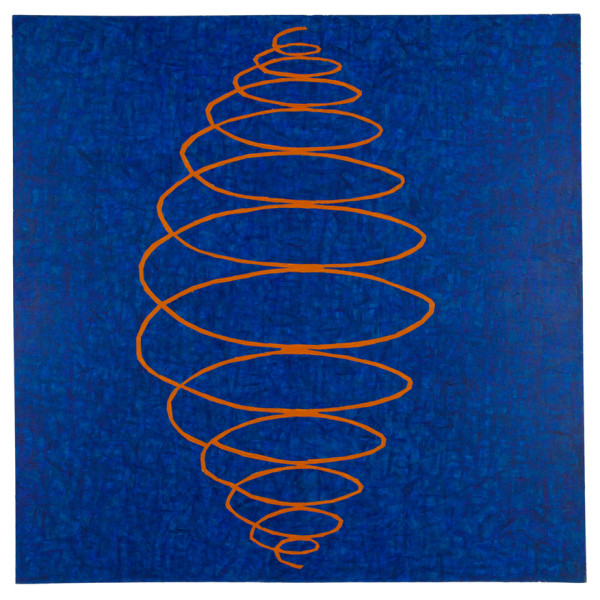 Beefhaus is a newer project space run by the collective Art Beef, located in an odd yet pleasing storefront. The DB14 show, curated by Michael Mazurek and Jesse Morgan Barnett, focuses on addressing language and image, and included works by Mark Booth, Michael Corris, Petra Cortright, George Horner, Adrian Piper, Richard Roth and Michael Wynne. The space was dark, the ceiling was cracking, light bulbs were out, and some rooms seemed unfinished and unsafe, but it made no difference, for it was the art that was the focal point and the artists had a field day with a hodgepodge of architectural elements. There was an end-of-the-night vibe among the viewers and the works. Playful and punchy, it reminded me a lot of the old Joanna exhibitions in Houston.

Some of the pieces called for drastic measures. One of Richard Roth’s pieces was hidden back in a tiny hallway, in a very small safe measuring about 5’x5’, barely big enough for the sculpture. It appears that a hole had simply been cut into the drywall, creating a 3’x7’ doorway of hanging insulation and exposed metal studs. Need room to see the work? Ask and you shall receive.

Outside the new doorway was the middle of a room with Michael Wynne’s Cemetery Pisser, a huge red vinyl banner, simply letting you know what is what. Eat your heart out Jenny Holzer. Facing Wynne’s piece on the opposite wall were two prints by George Horner, known for his bright prints and installations. As a new visitor to Dallas, I cherished Horner’s piece that reads, “Other than that, Mrs. Kennedy, how did you like Dallas”? 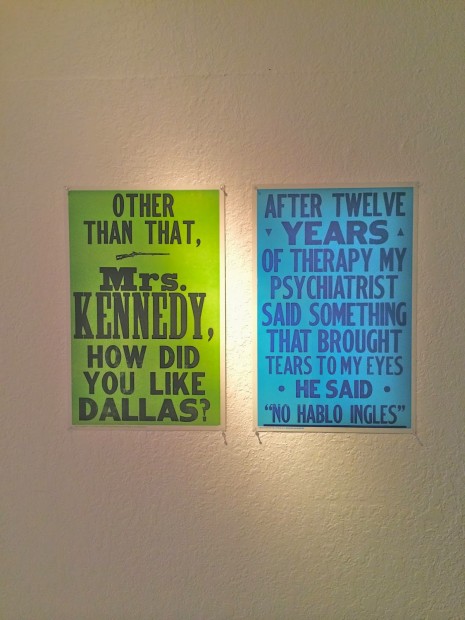 George Horner, Untitled, 1994-2012. Ink on poster board. Courtesy of Beefhaus

These exhibitions are progressive and fresh, making me wish I had planned for a longer stay.

Stay tuned: on Day 2, I will be getting a walk-through of CentralTrak and its studio residents, talking with several of the DB14 artists, touring the Deep Ellum neighborhood, and getting inside of the curatorial project Deep Ellum Windows, headed by Jeff Gibbons and Justin Ginsberg.

Announcing New Issue of Semigloss and Its Release...