Daniel Johnston at the opening of “On Their Way to Heaven and Hell” at Redbud Gallery.

On August 1st, San Antonio artist Christie Blizard drove to Houston to attend the opening of “On Their Way to Heaven and Hell,” a collaborative show of Jeff Wheeler and Daniel Johnston’s work at Redbud Gallery.

His shirt was the same red as the walls. He smelled like a teenage genius. His belly was pregnant with a diabetic prodigy that might come roughly once every 200 years. Thank you to Jeff Wheeler and Daniel’s sister Margaret for bringing him into this world, to the opening at Redbud Gallery. I’ve been giving work anonymously to Daniel Johnston for the past five years so there was zero chance I would miss this potential alignment of all that is miraculous in Texass. 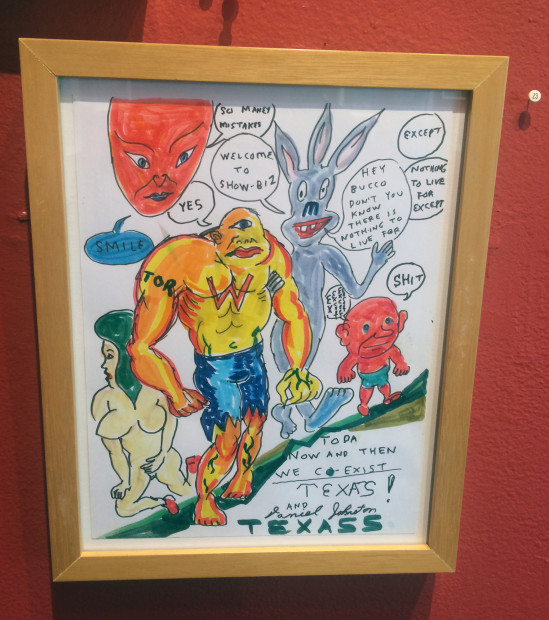 And there he stood, the crazed Santa of the underworld. I have been firmly fascinated with Daniel Johnston since 2006. Lubbock artist Jeff Wheeler has been obsessed with him since 1993, and planning this collaboration for 22 years. So I guess he wins the fan award. 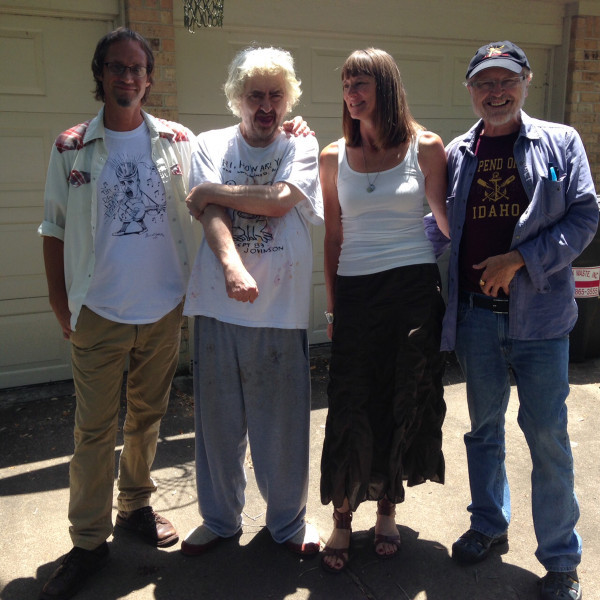 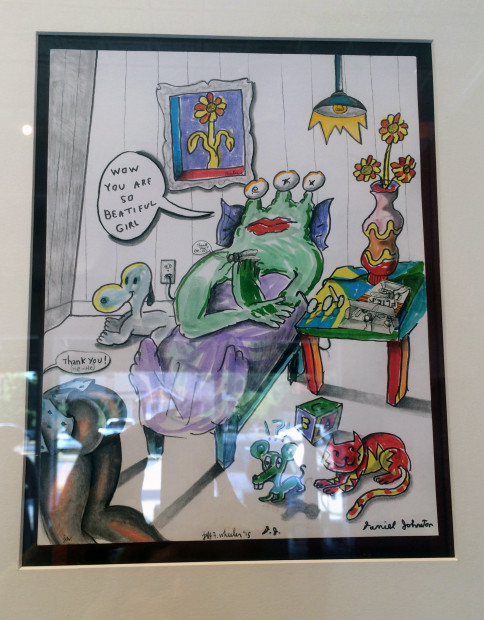 As far as the collaboration went, Jeff started the drawings, mailed them to Daniel in Waller to work on, and then Jeff finished them. It was a Jeff-Daniel-Jeff volley. Daniel’s father destroyed nearly the entire first set of drawings for being too sexual. The only one that survived is the image on the postcard, “Jeremiah’s Bedtime.” It’s a self-portrait of Daniel as his familiar three-eyed alien frog, lying in an infirmary bed, lasciviously watching the bending female figure (chopped at the waist by the edge of the paper). As a result of the censorship, the rest of the collaborative drawings in the show were done in the three weeks before the show opened. On the two adjacent walls, solo pieces hang by each artist. 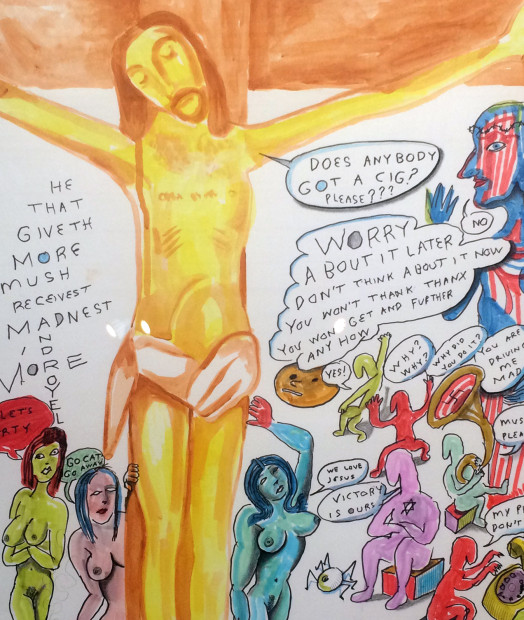 Wheeler and Johnston, “The End is Over” (detail), acrylic and markers on paper

Jeff’s formal contributions to the collaborations and the show add a kind of fleshed-out realism to the work. But he also brings his brand of West Texas ironic vernacular and an atemporal appropriation to Daniel’s virginal hell-visions. Such is the piece “The End is Over” with the appropriated Yellow Christ of Gauguin. In case you were wondering, Christ was a smoker after all. 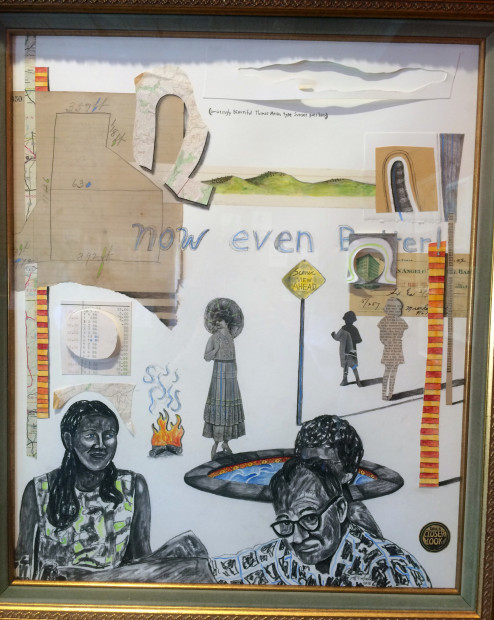 I lived in Lubbock for six years, so I understand the lean towards atemporality and the out-of-place-ness that Wheeler’s collages bring. The vastness of West Texas enabled me to tune my mind like a radio while the buzz of its remoteness had its own kind of drama. In Wheeler’s collages, each image is its own island, just like the Hub City itself, and the vast expanses between it and the rest of the world pound with an isolated, dry indifference. Both artists use their particular locale as the intersecting points: one artist geographically and historically clever, the other extra-solar. 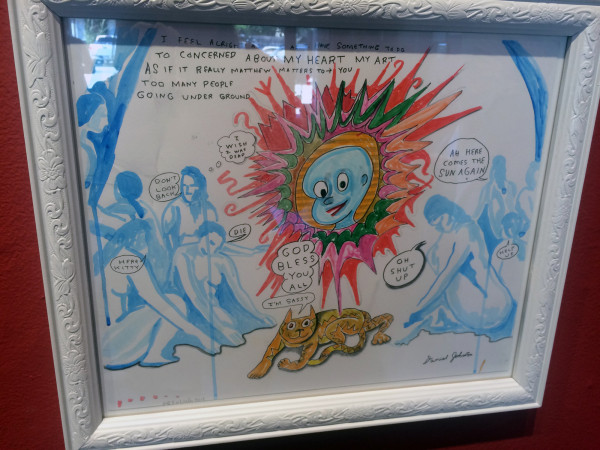 Wheeler and Johnston, “God Bless You All,” acrylic and markers on paper 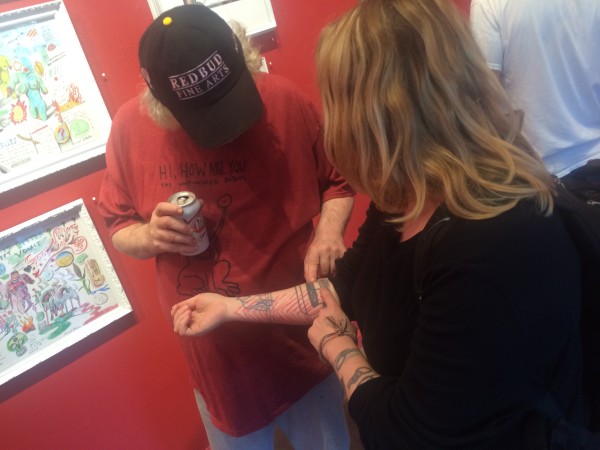 the author with Daniel Johnston

During the opening, I walk up to Daniel and tell him I am a big fan. We have our picture taken. He puts his arm around me and says “Woman,” in a gravely yet naive voice. He touches my arm where I have tattoos. I tell him I want to get one of his drawings tattooed on me. He says people often get the frog. I shake as he talks nervously to me in almost trite sentence fragments that, coming from him, seem to be a vestige of contact.

I met the baby of the universe.

Jeff Wheeler and Daniel Johnston’s “On Their Way to Heaven and Hell” is at Redbud Gallery, Houston, through August 30.