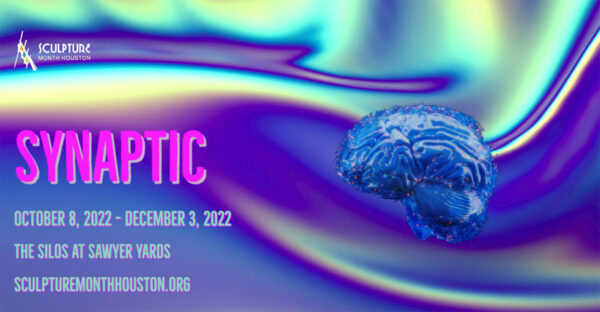 Sculpture Month Houston (SMH) has announced that its 2022 exhibition, Synaptic, will debut on October 8, 2022.

SHM, an arts organization that hosts an annual citywide festival showcasing three-dimensional works of art and installations, was established in 2016 by Volker Eisele and Antarctica Black (director and manager of Rudolph Blume Fine Art / ArtScan Gallery) alongside Tommy Gregory (then-Director and Curator of the City of Houston’s Art Collection at the Houston Airport System).

The organization has staged five years of celebrations featuring local, regional, and national artists. The main exhibition space for SMH is SITE Gallery Houston, which was formerly used to store Mahatma rice. The building is comprised of 34 round silos, which are given over to individual artists, many of whom make site-specific work that responds to the unique space. Occasionally, other galleries and art spaces across Houston also participate in the festivities by hosting their own shows of 3D work in October.

This year’s theme for the SITE Gallery exhibition, “synaptic,” refers to the synapses that make up the body’s neuron transmission system. Synapses act to create connections and enable the brain to transform simple elements into thoughts, images, feelings, and emotions. Similarly, SHM sees the exhibiting artists as “intermediaries working in the space between ‘a thought and a thing.’”

This year’s selected artists include:

In a press release announcing the event, SHM shared the following highlights of the show:

Synaptic: The Sculptural Presentation of Neural and Psychological Systems will be at the SITE Gallery at The Silos at Sawyer Yards from October 8 through December 3, 2022.