The Contemporary Austin to Screen “The Devil and Daniel Johnston” 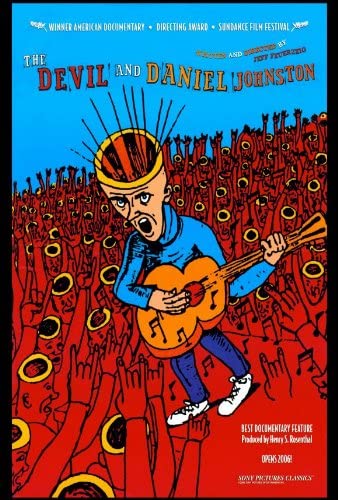 On Friday, November 12th, The Contemporary Austin, a museum located on Congress Avenue in Austin, Texas, will screen The Devil and Daniel Johnston, a documentary about the late musician and artist. The screening, organized on occasion of Johnston’s survey exhibition at the museum, is co-presented by the Austin Film Society.

Directed by Jeff Feuerzeig, the 2005 film has been widely recognized for its portrait of Johnston. The film uses footage shot by Feuerzeig and archival material from Johnston’s life to explore Johnston’s art, his music, and his life with bipolar disorder and schizophrenia.

For his work on the documentary, Feuerzeig won the 2005 Directing Award at the Sundance Film Festival, with the film also receiving a nomination for the festival’s Grand Jury Prize. The documentary won the 2005 Critics Award at the NatFilm Festival in Copenhagen, the Audience Award for Best Documentary at the San Fransisco Independent Film Festival, and was featured on numerous “Best of” lists, including Mojo’s 2010 compilation, The Best Rock Documentaries Of All Time!; and Rolling Stone’s The Top 25 Music DVDs of All Time.

Johnston is perhaps best known for his character Jeremiah the Innocent Frog, which is painted on the side of a building on Guadalupe and 21st Street in Austin. The drawing was the cover of the artist’s 1983 album Hi, How Are You: The Unfinished Album, and was propelled to fame when Nirvana frontman Kurt Cobain was seen wearing a shirt featuring the album’s artwork.

In many ways, Johnston and his work quickly surpassed the “cult musician” status to become ubiquitous in pop culture — well-known musicians covered his songs, and his art received increased attention (he was included in the 2006 Whitney Biennial).

And although the Contemporary Austin’s current show is the first-ever museum survey of the Texas artist’s artistic production, Johnston’s work has been recognized by his home state. He has been involved in countless solo and group exhibitions organized by (among many others), Bale Creen Allen Gallery, Redbud Gallery, the Dougherty Arts Center, and, most recently, Ro2 Gallery.

Additionally, shortly before Johnston’s death in 2019, Houston’s Catastrophic Theatre re-presented their musical Speeding Motorcycle, which, according to a review of the production written for Glasstire by Sean J Patrick Carney, “is told primarily through the songs of anti-folk-music-hero Daniel Johnston.”

Doors for the Contemporary Austin’s rooftop screening of The Devil and Daniel Johnston open at 5:30 PM on November 12th. The film will begin at 7 PM. The museum will host a Q&A following the screening with the film’s director and writer, Jeff Feuerzeig, and producer, Henry S. Rosenthal.

You may also stream the film online.