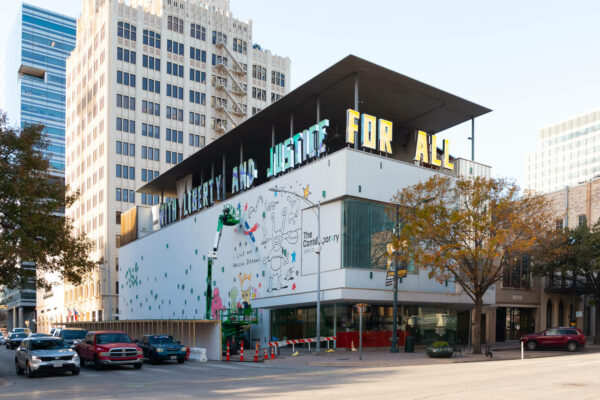 The Contemporary Austin will unveil a mural featuring iconic images from Daniel Johnston’s artwork on January 22, the late artist’s birthday, which is officially Hi, How Are You Day in Austin.

Mr. Johnston is best known as a musician who recorded low-fi songs and often used a chord organ and an untuned ukulele. He moved to Houston in 1983 and later lived in San Marcos shortly before moving to Austin. Though well known in Texas, he was popularized through the 2005 independent film The Devil and Daniel Johnston directed by Jeff Feuerzeig.

An aspiring cartoonist, Mr. Johnston designed the covers of his releases. According to a press release from The Contemporary, the mural brings together some of the artists most notable characters including, “the Beast, a multi-headed creature referencing the Book of Revelation; Jeremiah the Innocent, a symbol of pure innocence anchoring the landmark Hi, How Are You mural; Vile Corrupt, Jeremiah’s evil, multi-eyeballed nemesis; and Casper, the ghost of Jeremiah and symbol of spiritual redemption.”

The Daniel Johnston mural was commissioned as part of the institution’s current exhibition, Daniel Johnston: I Live My Broken Dreams. The exhibition is on view through March 20, 2022, and showcases over two hundred works of art, including flyers, home-recorded cassette tapes with hand-drawn covers, photographs, home movies, and more.

In a recent press release, CEO and Executive Director of The Contemporary, sharon maidenberg stated, “We are thrilled to present this beautiful mural at the Jones Center honoring the life and work of Daniel Johnston. An extension of the first-ever solo museum exhibition of Johnston’s work, this mural is for the city of Austin. We hope it sparks joy and conversation about art in its various forms.”

The public is invited to attend the ribbon cutting for the mural in person or via The Contemporary’s Instagram livestream at 12:30 pm on Saturday, January 22, 2022.

Monika Sosnowska at The Contemporary Austin