Frederick Jackson Turner believed our American sense of manifest destiny was shaped by the frontier; and such is true within Texas, even today. It’s a big place. It’s dorky even to point it out; but if you live east of the Brazos River you tend to have a vague, yet comforting, sense of all those millions of desert acres out there. And it’s those very acres of Coyote/Roadrunner canyons and mesas that inform our blazing state identity far more than the swampy forests of Houston, where I live. 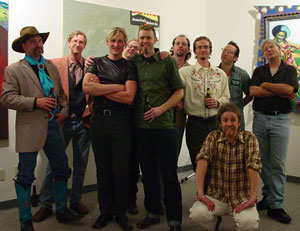 Two years ago I drove from Amarillo down the panhandle and around to El Paso, seeking “all the art in west Texas.” What I managed to see was great stuff: Howard Taylor’s saddle-shaped little gem of a museum in San Angelo, and the El Paso Museum of Art‘s excellent collection of western art and huge Luis Jimenez sculpture Vaquero out front. 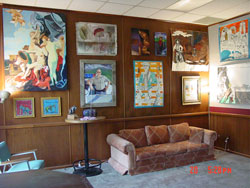 But the biggest surprise of that trip was Lubbock. Smack-dab in the middle of the panhandle, cotton town-turned-dustbowl sitting on the environmentally-ravaged Llano Estacado, home to Texas Tech and hard-core religious fundamentalists: Lubbock held little promise as a haven for visual art. At the time, Ken Bloom was the director of the Texas Tech galleries (he’s since left for the Boulder Museum of Contemporary Art), and as it turned out, he was fostering a thriving student community, encouraging students to show wherever they could in the building. From what I’ve heard, it was like James Surls at the University of Houston in the heady days of the early 1980s, when students were encouraged to go for it at the incubator space, the original Lawndale.

Over the years, Lubbock has turned out some real talent, including Terry Allen (currently showing at Pillsbury Peters in Dallas), Jim Johnson, Joe Harvey, and Ken Dixon. Most of these artists work in some way within the older tradition of western artists like Frank Reaugh and Tom Lea. 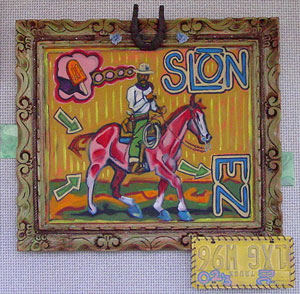 Emerging from this local heritage in Lubbock is a group of young talent whose exhibits are spearheaded by two brothers, both alums of the Tech art department. Two years ago, Jeffrey and Bryan Wheeler, sons of a traveling preacher and Westerners to the core, set up shop in a cheap storefront in downtown Lubbock and started mounting group exhibitions. The art itself, both theirs and others”, was a mixed bag, mostly figurative stuff on western themes. But the best of it was damned good.

So when I got the email from Jeffrey Wheeler that the boys were putting on Ulterior Motifs, their annual art-music-performance extravaganza, I figured the time was ripe to return and see how things were cooking with the Lubbock School. And things are simmering along just fine.

The brothers Wheeler have moved to new digs; specifically, a former Furr’s cafeteria. It’s thousands of carpeted square feet with something like 14-ft ceilings. The rather makeshift show of two years ago has become a professional affair: all the work is carefully installed and lighted, and most artists include printed price lists (although it seems sales are still feeble, at least locally). It’s a wild event, in the tradition of art-show-as-entertainment: no less than four bands were on view that Saturday night, the place was packed, and there was even a sort of ambient chill-out mini museum in the den, where visitors could relax on comfy thrift store sofas and enjoy the historic Lubbock School works on display.

As of 2000, the population of Lubbock is 189,564. An estimated 450 people came to Ulterior Motifs 3, which means that a similar turnout in Houston (in terms of population) would be about 9,400 people. According to Ken Bloom, the Wheeler brothers have single-handedly reenergized the Lubbock art scene by producing the mixture of entertainment and art that has always been critical to successful exhibitions. They’ve also contributed to the revitalization of downtown Lubbock by igniting interest in their odd rented spaces. Bloom says the Ulterior Motif shows have “polarized the imagination, separating the chaff from the wheat in Lubbock” (meaning generated a lot of admiration — and a lot of loathing). 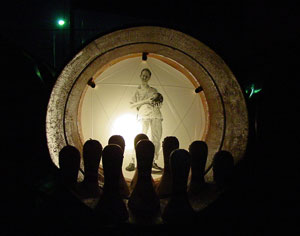 The work of almost all the artists in Ulterior Motifs 3 is solidly out of the tradition of western artists. Just as Bruce Nauman‘s horse videos are informed by Frederick Remington paintings, so do the Lubbock School artists faintly echo the pastel landscapes of Frank Reaugh.

Bryan Wheeler not only creates large, environmentally-charged paintings, but also sings and plays guitar in a local western rock band, Bubba Earl and the Panhandlers. Some of his paintings have strong overtones of Ruscha — in one, a sepia-toned background of a cliff face is superimposed with the words “extractive reserve.” In all of his paintings, a longing for an untouched landscape, and perhaps a more naturalistic human past, emerges.

B.C. Gilbert is from Lawton, Oklahoma, but he got his MFA from Tech and lives in nearby Idalou (because, he says, the traffic in Lubbock is just too hectic). Gilbert’s kitschy figurative paintings are in the deep strange colors of Matisse’s Woman . His work is inhabited by cowboys, Indians and horses thinking about ice cream cones, reclining nudes or corn dogs, with little cartoony thought bubbles above their heads. The paintings are framed in hokey, upholstered naugahide-and-horseshoe frames with whipstitched license plates. Even Gilbert’s own handlebar mustache comes straight out of the Civil War era. But beneath the goofy plastic cowboy aesthetic is skilled painting that is at once humorous, nostalgic and tinged with melancholy. Viewing it is like reading by a Will James novel — you don’t expect to be so deeply moved.

Will Channing hails from Manchester, England and teaches sculpture at Tech. I asked Ken Bloom what a Mancunian was doing in Lubbock, to which he replied “having fun.” Those who caught the To the Trade show at DiverseWorks will remember him as the blue-haired guy with Fal-Con, a duo of artists collecting “automotive ephemera” from volunteers” road trips. So far Fal-Con’s gotten everything from rusted engine odds and ends to someone’s numbered tunic from a marathon. At Ulterior Motifs, Channing had lovely bits of polished steel that had been blown up like little ballons. They were presented hanging on the wall encased in see-through plastic shipping pillows, which reinforced their strange sense of fragility — if not so protected, these chunks of metal might just pop.

James Porter doesn’t live in Texas, nor did he study at Tech, but along with Jeffrey Wheeler he makes up an artist persona called Franklin Ackerley (a pseudonym using the two artists’ middle names). The Franklin Ackerley work is a combination of Porter’s and Wheeler’s drawings: the irreverent, footnote-laden breasts, clouds and barbed-wire fences of Wheeler against Porter’s excellent portraits of people and animals. Porter teaches sculpture in San Francisco, and he also showed some fantastic wall bronzes of little winged devil-cherubs.

James Johnson is the most senior member of the group (according to Jeffrey Wheeler, Johnson is “the best known Lubbock artist until Ulterior Motifs came along.”) Originally from Syracuse, NY, Johnson has been painting in Lubbock for close to 20 years. He’s best known for taking on subjects that the aforesaid religious fundamentalists can’t stand, and was once asked by a policeman to hang a curtain over a shop window where his art was hanging. His video work, some of which features a Tony Oursler-inspired Johnson talking about how busy he is and some of which is purely abstracted lava-like flow, was far and away his best offering at Ulterior Motifs 3 (though his oversized paintings of psychotic women bodybuilders staring into the eyes of the viewer were pretty darned compelling).

Art Zealot is a tough-looking greaser dude with the personality, it turns out, of a huggable teddy bear. Zealot’s crudely interactive sculptures consisted of oil barrels turned on their sides in a pyramid, with bowling pins and other items attached to the insides of the barrels. Pressing on panels behind the piece lights up a background image in each barrel individually, which means you need two energetic people to see the piece properly. The awkward, messy effort demanded by lighting up Zealot’s work suggests the awkward, messy effort required of dealing with fossil fuels generally, and points to the deep symbiosis between Texas and oil.

Performance artist Chris Caddell did a strange little thing involving swallowing a raw egg for the opening ceremonies. Most onlookers seemed a bit nonplussed, but appreciated the six Tech cheerleaders he had arranged to do their acrobatics in front of the building.

Making art in a place like Lubbock means having relative freedom, but also means working in obscurity if the work doesn’t get shown where there are more people. The strong art coming out of the Lubbock School needs to be seen elsewhere in Texas. I hope Ulterior Motifs makes a road trip sometime soon.