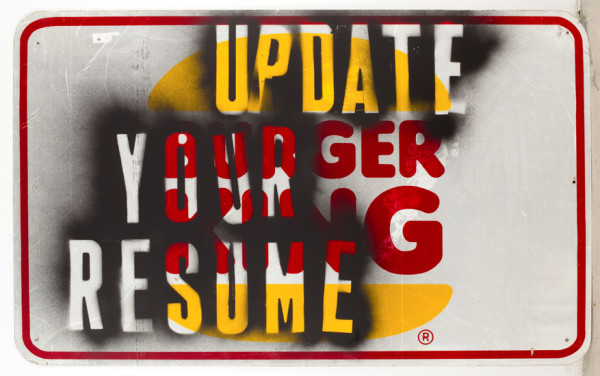 When a mysterious website called SellYouLater, which quickly changed to the less gauche ArtRank, hit the interwebs last month, it caused a flurry of anxiety in the art world, rendering people both disgusted and confused. ArtRank does just what it sounds like: it ranks the market value of contemporary artists according to their stats–things like web presence, major collector and museum support, gallery representation and auction results. It basically “turns the art world into a horse race,” as one commentator put it. Who could be behind this art market full monty? A young dealer named Carlos A. Rivera. He and some friends that are good at math put together the site to tell new collectors “what we think they should be doing.”

On top of the list of artists to BUY NOW at <$100,000, is Houston-based Mark Flood, who, with some serious guile and punk antics, has rocketed himself into the upper eschelons of art object desire. As evidence, Flood has a show up at London’s Modern Art  through March 22, a show which highlights the fact that, as one critic remarks, “Flood’s most interesting artworks have always been challenges to the way the art world functions. . . subtle thought-provoking jibes, playing with the art world but also playing along with it.”

Also of note, Dallas native and Marfa-based Jeff Elrod is also on the ArtRank list–#9 on SELL NOW. The algorithm behind the curtain says his market is peaking.

Not A Hobby: Krista Birnbaum