The Menil Collection’s 25th anniversary this year has had me thinking a lot about its importance in my life and in the cultural landscape of this city. It has also made me think about the much-longer-than-25-years history of John and Dominique de Menil–not just as collectors of art, but as thoughtful and dedicated interacters, encouragers and catalysts in Houston going back to the 50s. The couple played vital roles in the histories of the MFAH, CAMH, St. Thomas, Rice, and plenty of other places. Houston’s arts community is full of little de Menil connections and histories that, when uncovered, never fail to amaze.

One such history is being celebrated this coming weekend at Rice University– the de Menils’ founding, funding, and spirited guidance of the Rice Media Center and the Rice Museum between the late-60s and the early-80s. 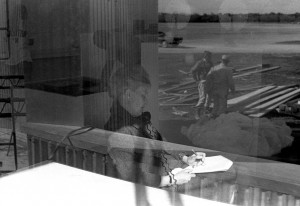 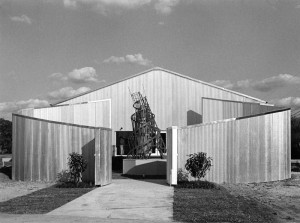 With the purpose of encouraging creative collaboration and education, the de Menils commissioned two corrugated metal buildings for the Rice University campus in 1969 (affectionately dubbed “Art Barn” and “Son of Art Barn”) to house the Media Center, the Museum, and the Institute of the Arts to facilitate the two. These quickly developed reputations for presenting the most innovative art, photography, and film in the city.

They brought to the Museum such notable exhibitions as The Machine as Seen at the End of the Mechanical Age curated by Pontus Hulten for MoMA, and Raid the Icebox for which Andy Warhol selected various works and objects from the storage vaults of the Rhode Island School of Design’s Museum of Art. (Allowing artists to curate from their archives was Dominique’s idea, by the way.) 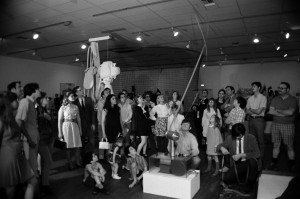 In celebration of the de Menils’ vision and contributions during those dozen years, Rice University is presenting Raid the Archive: The de Menil Years at Rice, with an exhibition opening, film program, and panel discussions this coming weekend, Oct. 12-15. 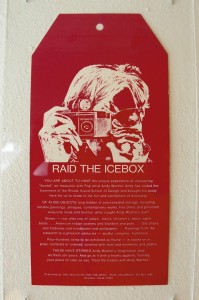 On Friday evening at 6PM, there is an opening reception for an exhibition of photographs, invitations, posters, letters, and other paraphernalia from the era. Photos of installations and exhibition openings provide nice glimpses of the people, art, and energy of the scene. Old film calendars tout great and unusual programming choices for their dollar screenings. And stuff like a thank you letter from Lady Bird Johnson is just plain neato. Especially striking to me are images of kids looking at art with awe, climbing on sculptures, playing with a Calder mobile. These epitomize a spirit of access and engagement, and they nod to the future.

Saturday evening at 7PM, there is a screening of rarely seen film documents capturing exhibitions and guest artists from this history. The one-time screening features footage of Roberto Rossellini in conversation with James Blue and Dominique de Menil, shot by Bill Colville in 1971 and ’72; Man, Art, Machines and Tinguely In Motion, both from 1969 by Bill Colville; Christenberry and Jim Love Up To Now by Tom Sims, from 1981 and ‘82 respectively; and excerpts of an Yves Klien interview from 1982 shot by Brian Huberman. 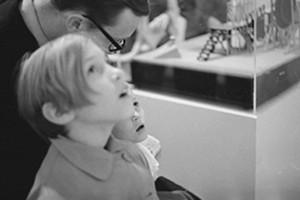 I think it’s fascinating and important to see how, before their Rothko Chapel and before the brilliant 25-year history of The Menil Collection began, the de Menils were placing art at the center of the human endeavor and Houston at the center of the art endeavor. This weekend’s Rice programs are reminders of the roots of a great art town, and good context for the ongoing anniversary programs at The Menil Collection.

The Menils had been doing this since the 1950s, but always through other institutions. First it was the Contemporary Arts Association (which later became the CAMH). But they had a falling out with other stake-holders. They moved their patronage over to St. Thomas, taking Jermayne MacAgy with them. They built an art history department there, but there was another falling out in the late 60s–after which the Menils moved the art history department they had built to Rice. I was an undergraduate in the early 80s, so I got to see the tail end of the Rice Gallery and had many wonderful professors who had gotten their starts at St. Thomas through the Menils, including William Camfield.

In the end, they got what they had always wanted–total control via the Menil Foundation. They wanted to bring art to Houston, but had a hard time sharing responsibility with other stakeholders. The Menil Foundation was the ideal vehicle their vision because no one else had a say in it.

Robert,
Yes! A really interesting, long and winding history in the arts here. And I think their moves and struggles say as much about them and this town as their triumphs do. I mentioned here, very briefly, their efforts going back to the ’50s, but tried (struggled!) to simplify for the purpose of this little piece previewing the upcoming Rice events. Looking forward to the talks on Sunday, with Bill Camfield among others. I didn’t go to school at Rice, but saw some art and films there at the tale end of this period, when I was young and impressionable. Growing up in the de Menil city spoiled me for life!