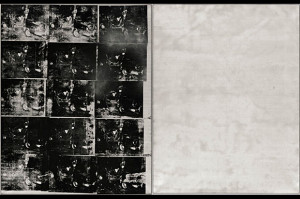 On Tuesday, Francis Bacon’s 1967 Three Studies of Lucian Freud fetched $142 million Tuesday at the Christie’s auction, beating the previous record set by the Edvard Munch’s The Scream in 2012, and making it the most expensive work of art ever sold at auction. Wednesday’s Sotheby’s sale of Andy Warhol’s Silver Car Crash (Double Disaster) for $104.5 million broke the previous record for any Warhol piece.

To put those numbers in perspective, if every single adult and child in Texas had chipped in $10, the state could have (barely) afforded to purchase Bacon’s triptych and Warhol’s Double Disaster to hang for public display.

Speaking of disasters, the Asia Society Texas has recently posted links and office phone numbers to find out about victims of Typhoon Haiyan (another record-breaker) that devastated the Philippines last Friday, including information about how to make those $10 (or more) donations to various rescue and recovery organizations.