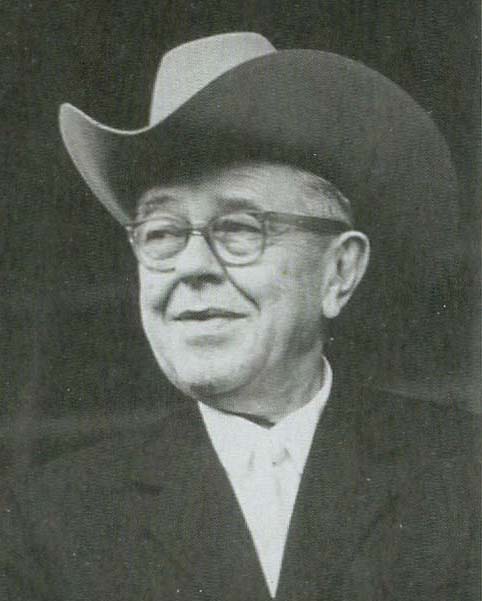 Detail from Adelaide de Menil’s 1965 portrait of Magritte at a rodeo in Simonton, Texas.

Forget iPhone 5. Instead of buying the latest Apple gadget, I’ve added Magritte VI to my credit card bill. Nothing Apple sells stirs my covetousness like a book on Magritte–and when that book adds to The Menil Foundation’s catalogue raisonne, well, Katy bar the door.

Unlike its five predecessors, this new one offers color reproductions of all the documented works, including those in black-and-white. It has a trimmer profile and a title–René Magritte: Newly Discovered Works–that further enhances the sense that this is much more of a mass market-oriented production than those gray and relatively stolid workhorses. 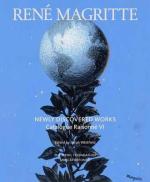 This isn’t surprising, considering how exponentially popular Magritte’s images and his persona have become during the past 15 to 20 years. Actually, it’s not hard to imagine this new book, whose sub-sub-sub title is Catalogue Raisonné VI: Oil Paintings Gouaches Drawings, gracing many a coffee table in the months to come.

Volumes I through V were published between 1992 and 1997, under leadership of the brilliant David Sylvester, who died in 2001. Sylvester was assisted by art historian Sarah Whitfield, who since has established herself as an authority on Magritte’s oeuvre. During those same years, The Menil Foundation helped organize the Magritte retrospective that toured London, New York, Houston and Chicago, and made his name into a household word. 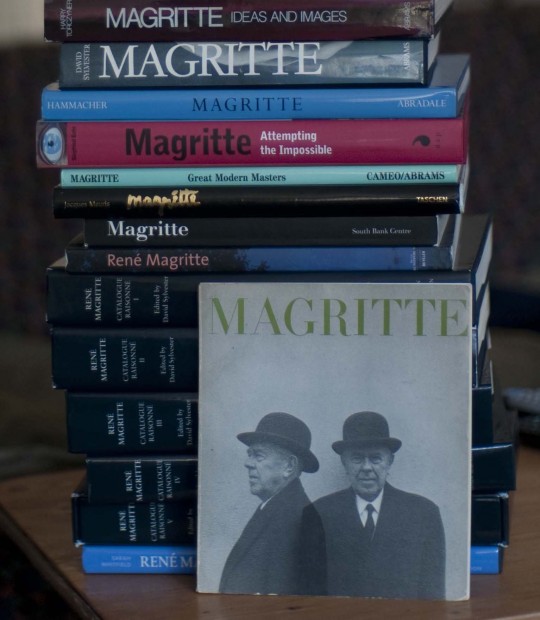 Some books about Magritte, including the VI-volume catalogue raisonne.

Whitfield wrote the catalogue for that landmark exhibition and edited this most recent addition to the Magritte cat rais. So, in a sense, the new release follows not only volumes I through V, but a plethora of monographs and exhibitions catalogues devoted to the artist’s work, which have since been published.

Collaborating with the Menil on this new volume are the Belgian publisher Mercatorfonds (which co-produced volumes IV and V) and the Brussels-based Magritte Foundation, whose involvement underscores the book’s authority. When a catalogue raisonne is published, it both hopefully and inevitably flushes out previously unknown works by whatever artist it addresses. To sort such discoveries as they trickle or flood in, the Magritte Foundation, established in 1998, set up an authentication committee that vetted all of the works published in volume VI. 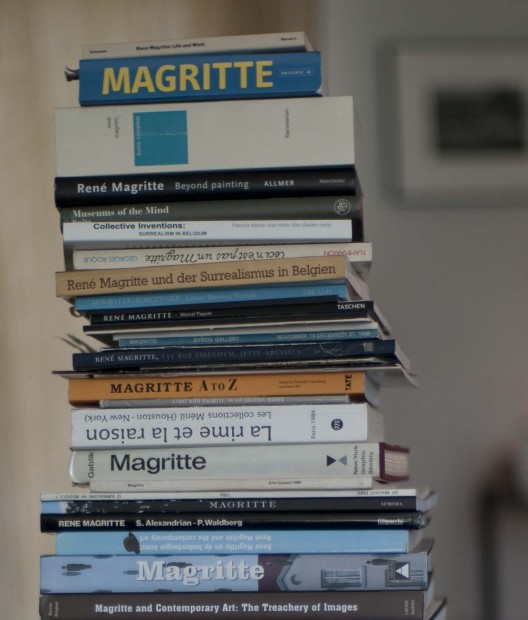 Some more books about Magritte.

The newly discovered works have been divided into three categories: oil paintings, gouaches and drawings that, in their turn, are organized chronologically, from earliest to latest. Each work is accompanied by its vital statistics and by a brief narrative that might include provenance, related works and earlier references, among other contextual tidbits. Reading from one entry to the next—and looping back around on many—it’s possible to obtain a sense of Magritte’s circle, from his earliest colleagues to later friends (and, of course, his wife, Georgette), and their respect for both art and artist. In many instances, I’m turned off when curators, gallerists, collectors et al rally to prop up their investment in an artist but, with Magritte, it warms my heart.

The real treat, of course, are the color reproductions–particularly the gouaches. Volume IV, published in ’94, featured hundreds of them, but they were small, black-and-white images. There is a 2006 exhibition catalogue from the Museum Boymans Van Beuningen that focuses on gouaches, and other books, including Whitfield’s catalogue for the above-noted retrospective, containing handfuls of such reproductions, but this new one is the real treasure trove. Magritte made a point of employing a laconic, self-effacing technique in his oil paintings: in Volume VI’s large-scale reproductions of gouache paintings we see Magritte’s subtle painterly way with that difficult medium. In other words, they are drop-dead gorgeous.