When the Media Archeology Festival began nearly a decade ago, it was primarily focused on artists’ repurposing of past media. Over the years, it has broadened its scope to include all kinds of visionary, interdisciplinary works that explore the connections of sound and image, old and new, fixed and live, art and technology, the world and you. The metaphor of “archeology” in its title has been stretched to encompass nearly every kind of inventive media exploration, and to emphasize the present moment as much or more than the past. While this might trip up the purist, the expansion of the term–and of the festival–is in tune with evolutions in the arts in recent years. And it’s a good reflection of the idea of recontextualization and the spirit of experimentation at the heart of its programming. This is a festival for curious minds.

The opening night event of Media Archeology 2012: Real Time features a screening of phenomenal work by the UK duo of Ruth Jarman and Joe Gerhardt, better known as Semiconductor.  They’ve been creating videos and installations for 15 years, but they first came to my attention about five years ago via their short videos created at the NASA Space Sciences Laboratory at UC Berkeley: Brilliant Noise, which uses raw images of sun flares and the white noise of solar winds; and Magnetic Movie, which beautifully visualizes invisible magnetic fields. Semiconductor has continued to create new experiences from scientific data with recent works such as 20Hz, in which the sound of a geo-magnetic storm generates visual forms. Theirs are really fitting creative translations to begin the festival, and to precede the opening night party at Aurora’s space on Bartlett St. 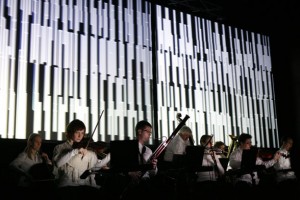 Friday night brings us from the phenomena around us to the rhythms within us. Created by the duo Teminalbeach (Pure and Erich Berger) and featuring twelve musicians from the Houston-based group Two Star Symphony, The Heart Chamber Orchestra is a unique audiovisual performance in which a visual environment and musical score are orchestrated live by the heartbeats of musicians. They will be wearing EKG sensors and simultaneously playing a score dictated by them. Yeah. Co-presented by The UH Cynthia Woods Mitchell Center for the Arts, and held at Barnevelder Movement/Arts Complex, The Heart Chamber Orchestra performance brilliantly connects the essential human instrument with new artistic practices. (And it’s already got me trying to figure out how I can hook a stethoscope into my ipod.) 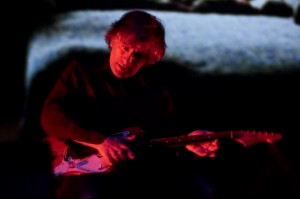 Saturday evening’s performance–perhaps the most anticipated of the festival’s events (at least by experimental film and music nerds like myself)–is also the lowest-tech of the three. Co-presented by Aurora and Nameless Sound, Text Of Light creates a new context for the work of great experimental filmmaker Stan Brakhage. Also held at the Barnevelder Movement/Arts Complex, 16mm prints of three films spanning Brakhage’s career– The Horseman, The Woman and The Moth (1968), Aftermath (1981), and Mammals of Victoria (1994)– will be accompanied by live improvisation from musical visionaries Tim Barnes, Ulrich Krieger, Alan Licht, and Lee Ranaldo (of Sonic Youth). Named after the 1974 Brakhage film, the Text of Light group has performed

internationally with films by Brakhage, Harry Smith, and others. Rather than score the films, they improvise with them. Just the opportunity to see these films alone would be a rare treat, but to see them in conversation with these four sound artists makes Saturday night’s program a must.

Media Archeology has become a great and uniquely Houston tradition, and this year’s program is a pretty perfect trio of inventive audiovisual experiences.