by Lucia Simek May 17, 2014
FacebookTwitterEmail 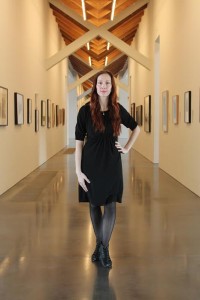 Former MFHA Core Fellow, founder of Houston’s Aurora Picture Show, and sometimes Glasstire writer, curator Andrea Grover, has been awarded the prestigious Emily Hall Tremaine Exhibition Award for her upcoming show Radical Seafaring at the Parrish Museum of Art in East Hampton, NY, where she has been associate curator since 2011. The $150,000 award will go toward realizing the exhibition which will explore art practices that “range from artist-made vessels to designs for alternative sea communities,” says the Sag Harbor Express, as well as consider the influence of conceptual and performance art in the 1960s and 70s on contemporary practices of artists reliant on bodies of water.

While in Houston, Grover ran Aurora Picture Show—a micro-cinema dedicated to experimental, non-commercial films—out of her home, a converted church in the Heights, for nearly ten years before retiring from Aurora in 2008 as the cinema moved elsewhere in Houston.