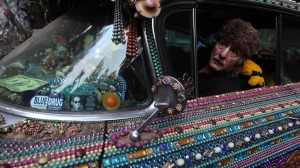 CAFH is unique in the film festival world because it’s not so much a celebration of movies as it is an exploration of film’s relationships with all the arts. The festival’s loose thematic frame- “films by and about artists in the visual, performing and literary arts”- was, I think, originally an idea to utilize our city’s established reputations in the non-film arts. I have a hunch that it was to be, in a way, not really a film festival but rather a catch-all arts festival using the looking glass of moving image. Interestingly, this focus on everything but traditional movies has actually made CAFH more true to the nature and future of film than most festivals around the country. Cinema is an experiential art, incorporating any and all artistic practices, and diverging in at least as many directions. It draws on techniques, concepts, and subject matter from all arts and culture. Thanks to festival programmer Richard Herskowitz, the festival’s simple and dangerously unfocussed idea has translated into eclectic, world-class programming. CAFH investigates the human creative endeavor, celebrates cross-disciplinary artists, and presents unique cinematic experiences that you’re not going to get at the multiplex, Redbox or Netflix.

There are, however, a couple of big challenges with the festival. The biggest is that no one seems to know about it. Most of the folks I’ve been quizzing know nothing of this year’s program and have been to few if any past festival screenings and events. Some had never even heard of the festival. So, odds are that you’re in the dark on this, too. The other challenge is that CAFH’s robust and diverse program is stuffed into a pretty short amount of time, and into a schedule that’s not the easiest to navigate if you’re juggling work, school or family. Three of its five days are weekdays, many of the best programs overlap each other, and no films or performances have more than single showings.

This just means that, in order to really take advantage of it, you need to look at the program carefully and creatively to come up with selections for your own personalized version of the festival. The good news is: there’s plenty there, and many different ways to slice it. For instance, you could look at this as an opportunity to see video installation work. These are satellites supporting other programs in the festival, but honestly, just visiting the various “Cinema On The Verge” installations by Lynn Hershman Leeson, Lech Majewski, Miwa Matreyek, and Braden King would be a pretty interesting (and free) day. You could focus on seeing a variety of great new arts documentaries, exploring the lives and creative processes of painters, designers, architects, musicians, dancers, filmmakers. Or attend the live performances with film- ranging from a silent film with a live traditional musical score, to cutting edge audiovisual experimentation.  CAFH’s special series of films by Chilean director Patricio Guzman, with the director in attendance for the Houston premiere of his acclaimed Nostalgia For The Light, is a real treat and enough to be its own festival. Or one could carve out a celebration of Texas stuff, including Echotone about Austin and its music scene, short film program Where I’m From, SXSW favorite Natural Selection, and the World Premiere of Carlton Ahearn and Ford Gunter’s Art Car: The Movie. Most likely, you’d prefer a combo. It all depends on your own interests, tastes, and schedule.

Actually, the great thing about film festivals is making your choices, taking a few chances, and seeing a bunch of stuff all together. The combined film festival experience says something about art, the festival, the city, and you. Instead of going into detail here about a few films I’m particularly excited about, I thought it might be more helpful to post a dozen of my picks (narrowing the program down to a little less than half), listing them in order of their screenings, and posting their trailers for you to check out. If you’re interested in something, you can click on the title for more info. Some of these I’ve been able to preview beforehand and love, others I’ve heard great things about.

Enjoy the trailers, and the film festival!

Followed by a live performance by Austin vocalist Dana Falconberry.

Eames: The Architect and The Painter

Trimpin: The Sound of Invention

With sound artist Trimpin and director Peter Esmonde in attendance for Q&A.

Nostalgia for the Light

Over Your Cities Grass Will Grow

The U.S. premiere of SuperEverything* is showing on two different nights at the Asia Society Texas Center FYI. Friday, November 9 and Saturday, November 10. So if you can’t make one of those nights, this might be the only performance that has more than one single showing.