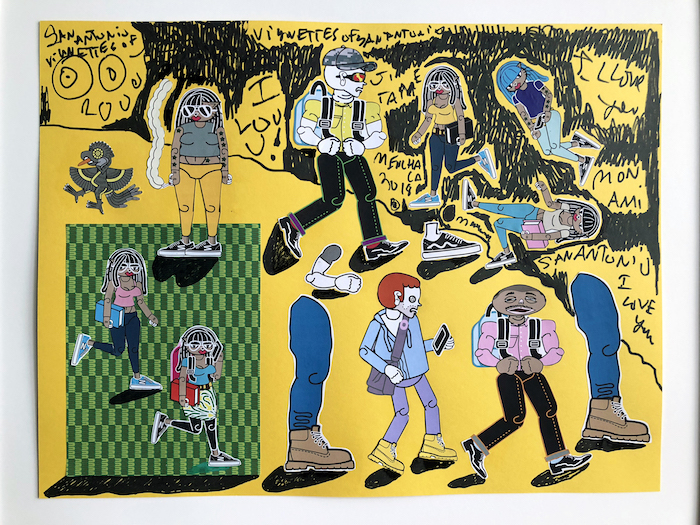 Some cities have artists who become sort of visual ambassadors for the aesthetic and culture. When I imagine New York in the 1980s, all the graffiti in my mind is Basquiat pieces. In San Antonio, we’re quite lucky to have dazzling, insouciant artists like Cruz Ortiz and Michael Menchaca, rather than, say, New Orleans’ anointed chronicler James Michalopoulos whose, woozy, viscous oil painting are like if Thomas Kinkade went on a absinthe and Ambien bender. (This actually is sort of how Kinkade died).

In the ecstatic current show at Ruiz-Healy in San Antonio, Menchaca took the howling, void-like desolation he felt from the election of Donald Trump and turned to creativity as a way of catharsis:

“I needed to regain my advocacy and strength as an artist. I turned to my drawings, the only thing that I continued to do through this dark period and my way of visually processing information. When I decided I was ready to produce new work, I returned without the negativity and anger over the subject matter. I was reflecting on my upbringing, my home, my city, my family, on me. I wanted to create artwork that would celebrate the experience of growing up in San Antonio and that this was a way of giving back to the city I love. It was a way to harness positivity into creativity which became a catalyst for a new form of energy for me and, by extension, resulted in a new means of production.” 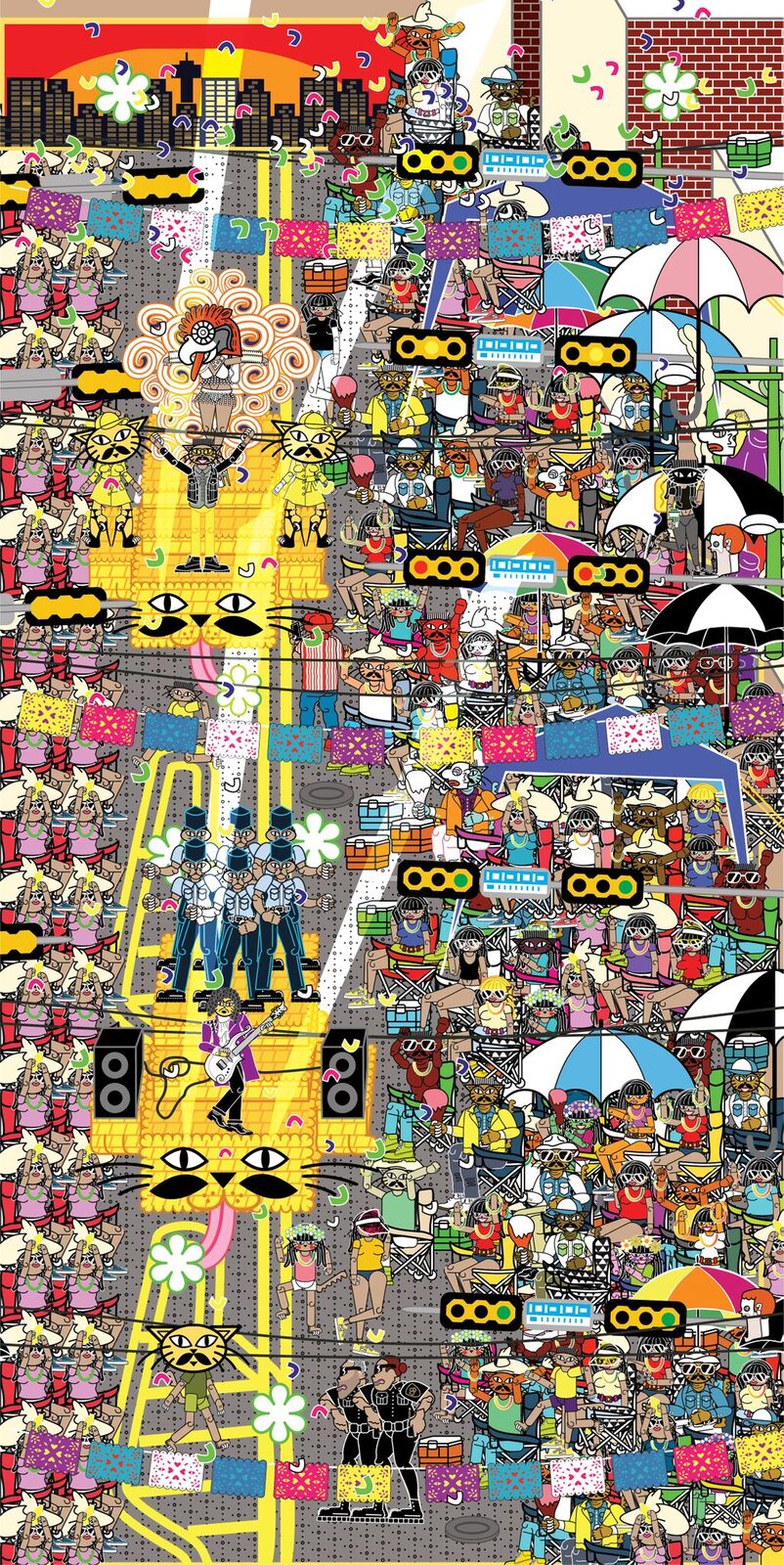 The Battle Of Flowers Parade

The show collects Menchaca’s free and mischievous drawings with three large, impressive collages of hubs of San Antonio culture, celebration, and vibrancy. Menchaca covered one wall with a green patter of wallpapered maize inspired by Mesoamerican aesthetics. The corn is symbolic — not just a staple of the cuisine of the region, but a nod to the “Cornyation” drag show that highlights Fiesta celebrations. Blessedly, San Antonio has not yet reached the stage of late capitalism and gentrification where it begins to take itself extremely seriously. 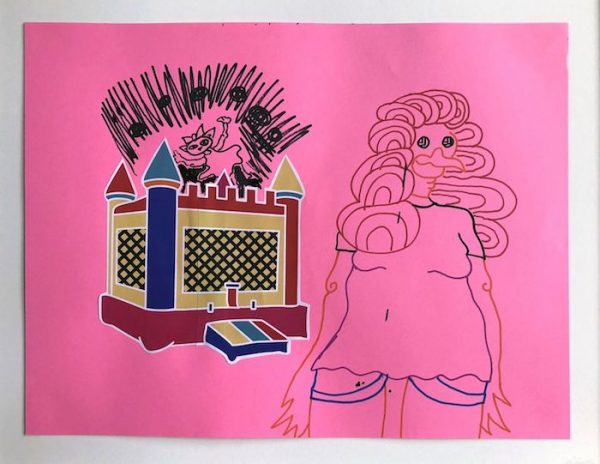 In Bounces of Funk, Menchaca depicts the ubiquitous bouncy house for kids’ parties with piñatas (you can rent a bouncy house for around $100) and one of Menchaca’s signature cartoon cats bouncing above it triumphantly while a chicken woman stands idly by. The pink piece summarizes the essence of Menchaca’s work in this show — humorous, absurd, poppy, and somehow deeply and affectionately true about the city of San Antonio. 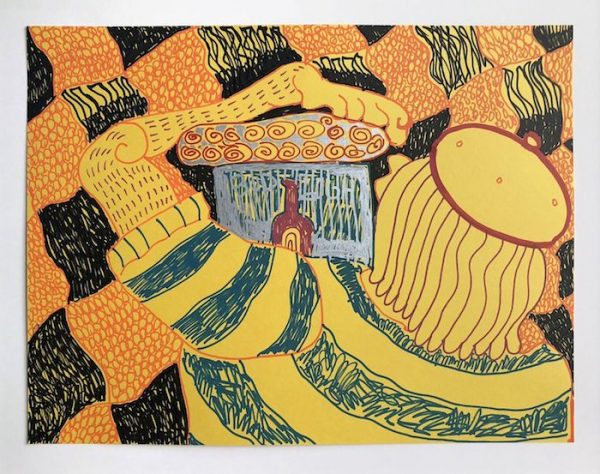 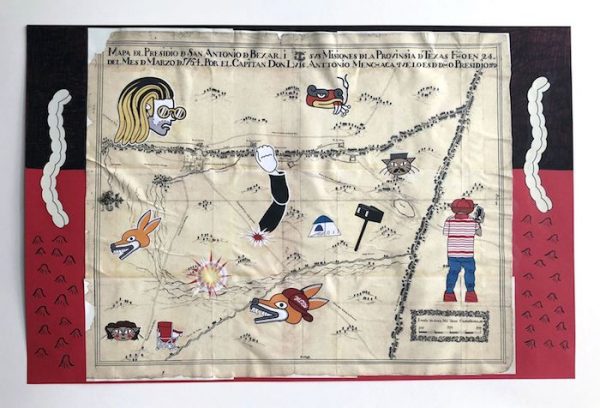 In H.E. BUDLIGHT, a bohemian in a beret carries a case of beer (in Menchaca’s vision depicted as a kind of McGuffin-like single bottle in a box) through a swirling patchwork of gold, suggesting the sunset vibe of heading to someone’s backyard for a kickback. In Mapa de San Antonio, Menchaca (who is quite possibly related to a Menchaca who mapped San Antonio in 1764) takes a vintage map of San Antonio and overlays it at various points with cutouts: a tent, a barbecue grill, people listening to music on their phone. The show carries on the lineage of Menchaca’s ancestors; with his wit, imagination, and intimacy with San Antonio, he’s making a new “map” that despite its playful surrealism makes perfect sense.

The collages depicting various geographical and cultural touchstones in the city hang across from the maize wallpaper and create a “key” to the city. They include: Easter at Brackenridge Park; the main promenade of San Antonio Community College; and The Battle of the Flowers Parade. The collages are precise, intricate, and chaotic at once, overwhelming in their scope and euphoria. They recall the great, scabrous, and hilarious comic book Real Deal. Menchaca has a casual genius in nailing the vibes of people, say six beers in, on a sunny day, being extremely stoked to grill, or serving face in a parade. In all three, the cops stand ramrod, their faces a rictus of unchill, but overshadowed by the revelry of the city.

Menchaca’s show is a striking template for how art that engages in ostensibly sentimental moods — being uplifting and celebratory, riding for your hometown — can avoid treacly pits. Menchaca’s work here takes flight, and glides like birds reflected on the still San Antonio River.