by Neil Fauerso May 22, 2019
FacebookTwitterEmail 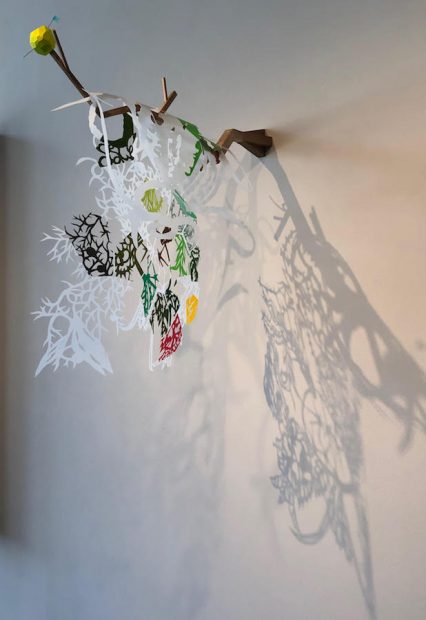 All photos: work by Leigh Ann Lester at Ruiz-Healy in San Antonio

Leigh Anne Lester’s work gives us the invigorating purity of focus. In her solo show No Necessary Time Axis on Evolutionary Novelties at Ruiz-Healy in San Antonio, the pieces all literally and metaphorically engage with genetics, botany, and the ineffable mysteries that accompany duplication and copying — that unknowable change that happens when one form begets a twin or heir.

Lester employs multiple specific techniques in creating these lush, layered pieces that could equally be described as DNA helixes or hanging gardens. She uses blind contour — the act of drawing an object without looking at the paper — to physicalize the inherent impossibility of a perfect copy in the propagation of life. As Hills Snyder writes in the rollicking catalogue essay:

“Life might be a blind contour. An attempt may be made to hone closer to an invisible line, a line that is defined again and again in a variety of forms, a variety as great as the population of the world. We throw out sticky pads in an attempt to cling to a concept of life that is altered daily by an ever-sharpening focus; and then we take days off or enter sleep, the quest forgotten momentarily, only to be shocked into awareness once again by the sun. It’s probably bad science to talk about similarities between hemoglobin and chlorophyll, but the leaning into sunlight is inevitable. Just don’t look at it. Because blind contour.” 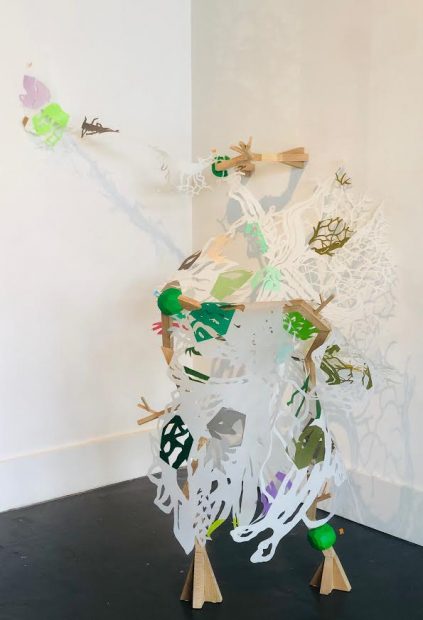 Lester combines blind contour with processes of precision. She hand cuts her materials with an exacto knife; the exquisite graphite draftsmanship of a plant may repeat as a cut-out lattice of plastic. There is a serenity and ease in the way the forms flow into each other and echo. Something cyclical and ancient, like seed-pods in the breeze, or reeds flowing in a stream.

Despite its immediate aesthetic sweep — the pieces all cast shadows so rich and defined I genuinely thought, at first glance, that they were painted on — it’s a dense show. Literary references abound. The graphite drawings recall medieval and renaissance plant codices, those inscrutable volumes meant to iterate the world. The pieces are spiritually rooted in the great German poet Goethe’s concept of the Urpflanze, or the primordial plant from which all other plants come. Goethe eventually concluded that it was not a defined form, but rather ever-changing. The idea of the mutable primordial can be considered the DNA of the show.

Coiled within the works is some uneasy menace. Goethe was, of course, most famous for his epic poem of the lure of forbidden knowledge. Scientists mapping the genome — a project Lester pays homage to in this show — is very recent, and the consequences of which (such as gene editing) are only beginning to unspool like a bucket going down a well. Who knows far the rope goes and what might be stirred when the surface of ink black water is struck? 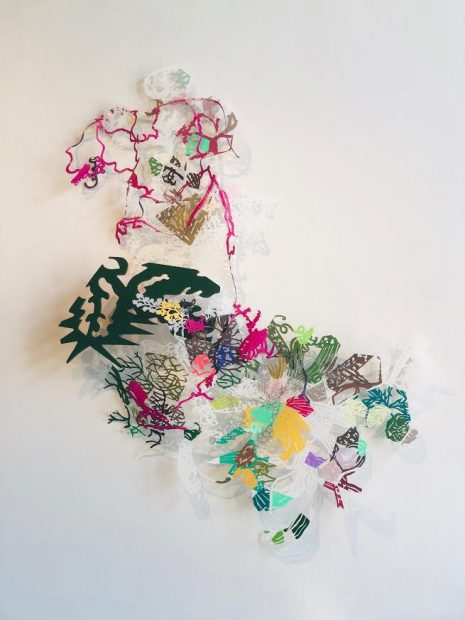 Lester’s work certainly fits into a current artistic zeitgeist. Perhaps because we are better informed on the savagery of civilization and the looming eschatological climate crisis, there’s a sense that art should amorphously matter. Thus, many recent contemporary exhibitions at museums incorporate some kind of STEM element — a collaboration with a scientist, copious statistics, the use of artificial intelligence. This can be interesting, but sometimes becomes trippily pedantic. No Necessary Time Axis on Evolutionary Novelties avoids such missteps through the twin engines of Lester’s rigor and intuition. These works were not easy to make, just like nothing worthwhile really is. It’s just that sometimes you hit a wave and it feels that way.