Two years ago Jesse Amado prescribed his 30 Day RX at Ruiz-Healy Art in San Antonio. Since then, his fascination with felt has been like a slow-drip I.V. as determined by his daily engagement with process—a certain amount each day is enough when it is all you do.

The current show at Ruiz-Healy, Becoming, is a summation of Amado’s concerns begun in 30 Day RX, and for that reason serves as a vortical kaleidoscope through which to look back at how he got here.

A key word for understanding Amado’s trip* is “sensorium,” a word that began appearing in the English language in the 1640s. It means pretty much whatever the human organism takes in through the senses, including everything psychological or cognitive in nature, the whole of what human consciousness perceives through the senses. So by extension the sensorium can be said to be the artist’s house—a veritable emporium of materials for him to play with—the suffix “orium” meaning “a place for.”

Never to be bound by terms such as “painter” or “sculptor” etc., Amado is in a constant search for new mediums. Somewhat ironically, this foregrounds the conceptual nature of the work—his boundless love of material intrigue ultimately makes the material manifestation secondary, even though his loving search for novel art supplies is where it begins.

But that is only the spark.

Gravity is the real key. 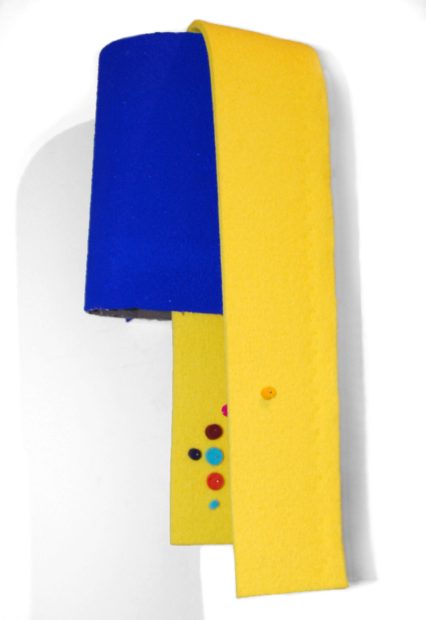 Whether it’s his 2007 take on Brancusi’s Endless Column spelled from the ‘E’ down in a stack of one-inch thick letters (which had to be placed on a pedestal to avoid the Spinal Tap Stonehenge effect), Days, the 2010 piece he made as a memorial to Linda Pace for the San Antonio Library, comprised of glass teardrop crystals (22,277 of them, one for each day of Linda’s too-short life), or the festooned fringes of A Short History of The West and have you tapped it yet? (Lonely Are The Brave, Blue Star Contemporary Art Center, 2009), gravity is the essential element at work within his choice of materials again and again. 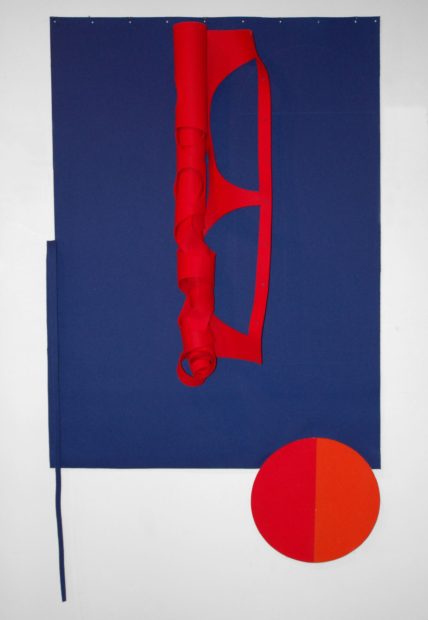 It’s even there in an early work, shown at the Southwest Craft Center in 1990, which subsequently traveled to Diverse Works in Houston in a three-person show called Taking Liberties. In this work, the title of which is held down in the fog of memory, two white doves** are kept in a cage suspended directly above a rectangle of granite placed on the floor and engraved with the words of the First Amendment. Throughout the show the text was gradually obscured by bird shit in an anti-homage to Jesse Helms, the North Carolina strange bird who flew under the Know-Nothing flag and whose moralistic blindness converted to a lack of respect for The Constitution and fueled his opposition to the National Endowment for The Arts, in response largely to Robert Mapplethorpe and Andres Serrano.

You’ll see gravity at play in the current show too, in a few works that reach back to his series of Consequences, the pieces first revealed in 30 Day RX, that were assembled from the scraps derived from the round tablet-shaped pieces that mostly fill out this current show. As the Doctor in Spanish director Luis Buñuel’s Exterminating Angel asks, “Did you bring your pills?” 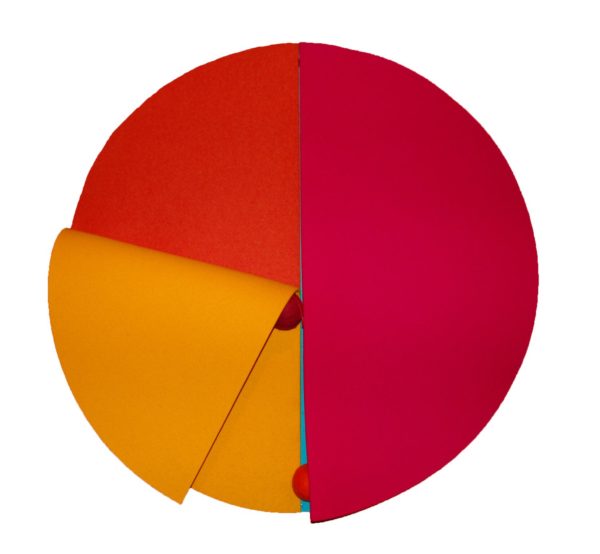 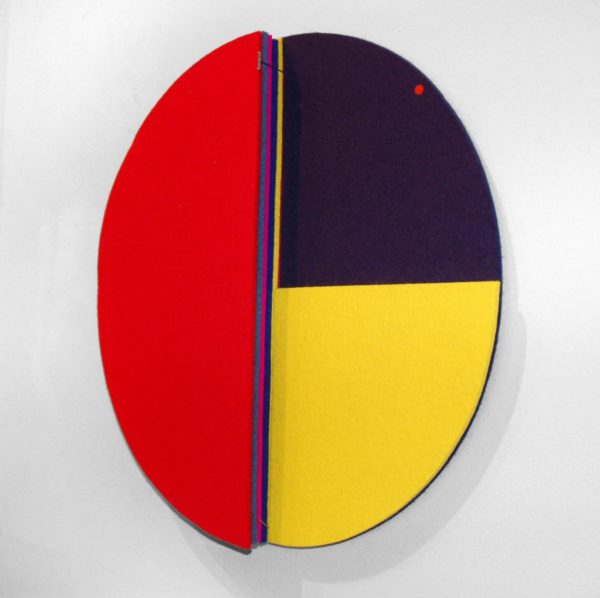 In this instance, Amado would have to answer yes. And of course I am taking a backwards glance to his Moving Images (Exterminating Angel) piece from 2000, in which he presented the film in sequential freeze frames, eliminating all the scenes that did not feature English subtitles, thus aligning himself with Buñuel’s own sensorium, as the director made the film in Mexico during his self-imposed exile from Franco’s Spain. You see, the scenes unencumbered by the imposition of dominant culture language were exiled too.

The consequences-type works hang in random compositions, as each responds to gravity in its own way. A trio of them, Three Graces: Youth, Elegance, Mirth, occupy the alcove space at the gallery. This is a long, five-foot wide area between the gallery’s office and conference room, which serves in this context as a walk-in wardrobe, giving a sense of levity as they are suspended, appropriately enough, from clothes hangers on a closet rod. 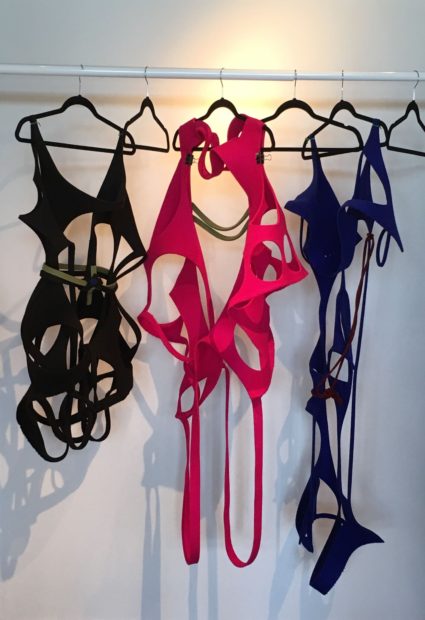 Amado characterizes the bodies of work from the two most recent Ruiz-Healy solo shows as being like a placebo, a harmless recreation, an alternative—to what? It doesn’t matter. He’s doing this, not whatever the other thing is. In his preparations for this show he sometimes removed these graces from their hangers and wore them around the house, one time as charm (youth), then as beauty (elegance), followed by creativity (mirth)—inhabiting his imagination in some particularly felt, but undefined, fantasy—and there really isn’t any withdrawal.

The alcove also reveals the perfect location for three pieces based on a 1997 fashion magazine which featured a male model duded up like Joseph Beuys, an artist of prime influence in Amado’s trajectory which he reacquainted himself with during a recent Blue Star/Bethanian Residency in Berlin. Beuys own line of felt outer-wear is cited to derive from his mythical animal-fat-and-felt rescue at the hands of Tatar tribesmen when his plane was shot down, crashing in the snow on the Crimean Front during World War II. 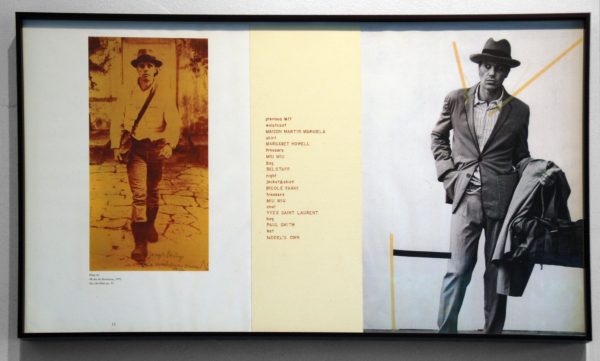 This playing in the closet is merely one aspect among many in Amado’s seemingly endless iterations. His 2008 installation, Fringe, Coils, a Demon and a Small Political Allegory, took on more serious issues, typified by reviewer Wendy Atwell as “evoking the vast wound of America’s wars.” A centerpiece of that show was a neon blurb announcing “mission accomplished” alternately flashing, “I lied.”

Will Scream, one of the best pieces in Becoming, also swings the pendulum back toward something heavy. It is its own self-contained horror film, a red and black felt dangle that practically drips blood and darkness. 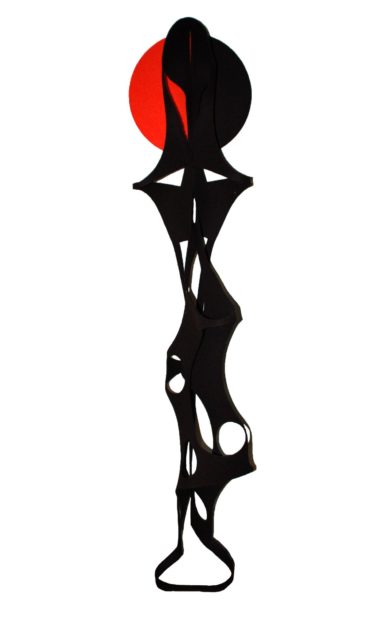 An early example of Amado’s use of felt goes back to 1991, when he fabricated an inverted cone at the Philadelphia Fabric Workshop. Circumscribe, as it was titled, is simply a series of mouth-down-Pacman shapes of descending size, curved into cones and placed each inside the other, with both straight edges of the “mouth” adorned by a brass zipper. The materials are basic and yet their use in this way combines to create a sexy mystery that muffles Cezanne while reaching past Beuys to Euclid.

Amado was commissioned in 2013 to produce wallpaper for Liberty Bar (Beauty and Charm coming up again—go there, you’ll see), a longtime hangout for artists and musicians in San Antonio, and for the past several years in its second location. Completed this past January, the wallpaper commission, along with the curtain of crystals in the library, are two examples of an intimate public art, quite the opposite of anything monumental. Both are there for the enjoyment of people who actually visit their sites—neither is accessible unless one is in the space with them.

The twin downstairs dining rooms of Liberty Bar refer back to the history of the building as a convent, one room named for St. Scholastica, the other for St. Benedict. Both saints figure in legends involving birds, a dove and a raven, and both birds appear in the panoply of Toile de Jouy-esque images that populate the ceiling frieze and wallpaper, which is installed in the Scholastica Dining Room. You don’t really need the back story to appreciate the scenario which becomes fantastic by virtue of repetition. Like the two white doves that silently shat upon on the granite, these birds “don’t have to talk, they’re just beautiful.” (Amado) 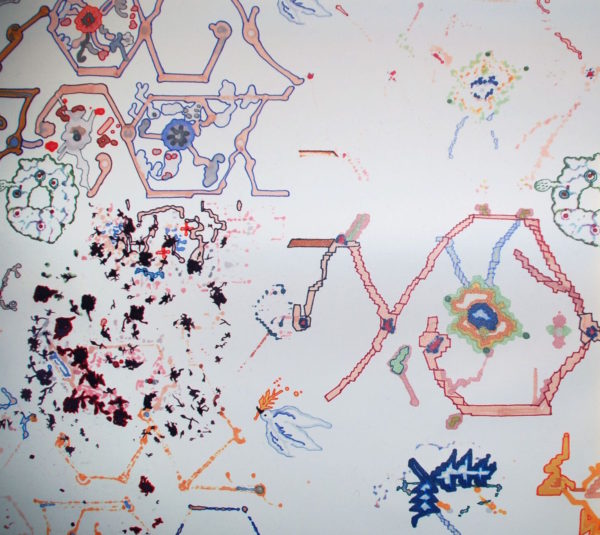 The broken Central Asian gul motifs borrowed from the collection of rugs that hang in the Benedict Dining Room serve to anchor the colorful scrawls that otherwise skitter across the wallpaper like animated molecular networks. Also included are stylized cactus wreaths, which reference the Liberty Bar tradition of hanging nopal garlands on the walls during the holiday season. The only thing missing are the lyrics to Led Zeppelin’s Immigrant Song, which, once upon a time were applied to the wall at the old location of Liberty with a tipsy Bic pen, remaining there for seven years. The overall design was made with a reverse drawing technique, which is achieved by allowing ink to soak through one side of the paper while outlining the stains on the opposite side. Amado used this method before in the previously mentioned A Short History of The West…, in which severely cropped images from skin magazines—porn obscurations—served as the basis for the circular anchors which held fast the long, loping stands of fringe.

The office of Ruiz-Healy sports a little lob at Trump, If this were my wall, I’d decorate it, a piece which employs the wallpaper design surmounted with a felt replication of an unfolded macaroon box. A testament to Amado’s endless openness to new forms, he acquired the macaroons in a barter with a San Antonio bakery, which purchased a piece of his work with cash augmented by a sizable tab which took the artist seven months to use up. He sometimes used the tab for pastries for the gallery staff at Ruiz-Healy, hence the repeated exposure to macaroon boxes and the subsequent disassembly of one of them.

One of Amado’s playful, daily rituals was revealed by his previous show at Ruiz-Healy—that of making his bed differently each day—and now, with this show Becoming, as a natural outcome of that habit, he has had to lie in that bed for two years, but now he’s awakening into whatever comes next. He says this show “is a good stopping point, but felt is such a great material it’s gonna be hard. It’s like an addiction.” 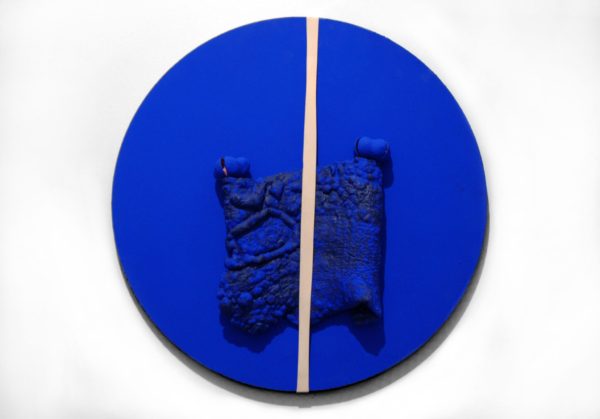 So it is this quest, more of a wandering spiral than a direct line of search, that births new ideas for Amado, whether he’s channeling Yves Klein in his treatment of a chicharrón, replicating pills in felt, finding a use for scraps or just randomly stumbling upon the products of a hyper-industrial age, he’s happy to welcome you to his world. He’s becoming.

*I simply refuse to use the word “practice.”

**This work is an exception to my personal distaste for artists who include animals in their work, in this case because Amado cared for them during the show and took them home afterwards, even birthing two squabs in his studio. The wing-clipped doves were caged when he discovered them at a flea market in search of materials. I use the word distaste perhaps too politely—I hate art that exploits animals. Talking to you Damien Hirst.

Through April 29 at Ruiz-Healy Art in San Antonio.