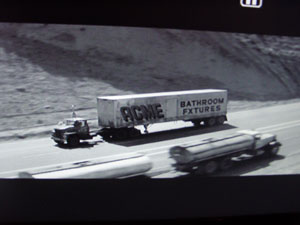 Curator Hills Snyder provides a poignant end to an era with Lonely Are the Brave at the Blue Star Contemporary Art Center. Inspired by the 1962 film starring Kirk Douglas that serves as an elegy to the finale of the Western frontier, the exhibit is also the last show celebrating one of San Antonio’s hottest traditions, Contemporary Art Month (CAM) in July. Though there’s been much discussion about exactly when
CAM started, the consensus now is that it began in the summer of 1986 in conjunction with the first show at the Blue Star, a Salon des Refuses mounted in response to a survey of San Antonio artists cancelled by a local museum. For the past 24 years, the Blue Star summer survey has been the centerpiece of CAM. But times have changed, and the artists who cleaned up an old warehouse and founded the Blue Star are now just as out of time as Douglas’ crusty cowboy, Jack Burns, stuck in the middle of a highway with automobiles whizzing past his trusty steed Whiskey. A new generation has taken over the reins and plans to move CAM to March, which may be a more
civilized (cooler) time for contemporary art in South Texas. 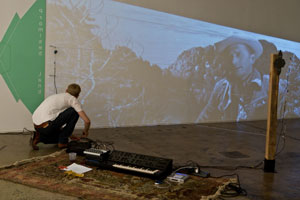 The movie “Lonely Are the Brave” has gained critical recognition over the years as one of the best Westerns ever made, despite being less than a box office bonanza. Douglas’ Burns wars with a modern world that has passed him by. The itinerant ranch hand rejects most technology, even refusing to carry a driver’s license or Social Security card. He gets into a fight with a one-armed man (Bill Raisch, who later played the one-armed man in “The Fugitive” TV series) in order to get thrown in jail so he can bust out his best friend (Paul Bondi), who’s serving time for aiding undocumented workers from Mexico. His friend, however, would rather finish his sentence, and Burns breaks out alone and heads for the hills riding Whiskey. But his horse, who steals the show, is no match for the jeep and helicopters used by the lawmen played by George Kennedy and Walter Matthau.

Director David Miller emphasized symbolism over action, remaining true to the spirit of Edward Abbey’s 1956 novel “The Brave Cowboy,” which was adapted for the screen by the formerly blacklisted writer Dalton Trumbo (who also wrote the screenplay for “Spartacus”). Composer Jerry Goldsmith provided a somber, lyrical score for his first major studio production, and Carroll
O’Connor (a.k.a. Archie Bunker) has a small but key role as a truck driver hauling a load of toilets. Recently released on DVD, “Lonely Are the Brave” is worth seeing even if you hate Westerns.

Justin Boyd uses a clip from the film of Burns, astride Whiskey, trying and failing to make his way up a rocky incline, running up and sliding back down in a heartbreaking scene of frustration that serves as a backdrop for an installation of barbed wire and fence posts titled Optional Obstacles. During an opening night performance, Boyd attached contact microphones to the wires, eliciting rising and falling sine waves that seemed to moan and wail in time with Whiskey’s Sisyphean efforts. In a series of prints stretched, distorted and minimalized with modernistic rigor, Boyd plays with images of Western movement and wanderlust, accented by cryptic quotes about a peaceful present such as “Here all the bombs fade away” and “Our change has come, but keep the powder dry.” 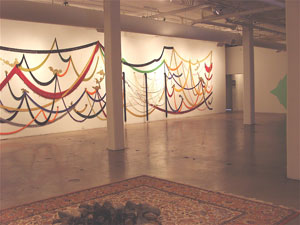 Jesse Amado reproduces the landscape that Burns and Whiskey ride into, including the caliche-choked draw that horse and rider have so much trouble climbing, using swaths of maroon, gold and green curtain fringe stretched across the Blue Star’s longest wall. Golden bubbles appear to emerge from the fringe at various points, which relate to the bubbles in 17th-century Dutch vanitas paintings as symbols of the transience of life and the suddenness of death. But re-affirming the life force, Amado adds the images of hands, traced from porno movies, grasping invisible sex organs. Amado’s A Short History of the West and have you tapped it yet? has the
look of a giant proscenium stage or big screen, the theatrical netherworld where our dreams unfold. 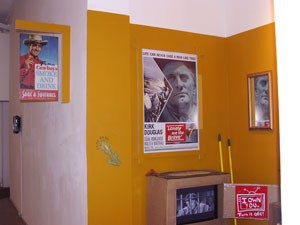 Snyder refers to the importance of imagination in the history of the West with a couple of not-really-art installations. A DVD of “Lonely Are the Brave” plays on a TV in a small nook featuring a comfy chair and a shelf of books, including the late Texas writer R. G. Vliet’s “Scorpio Rising,” Cormac McCarthy’s “Suttree” and Greil Marcus’ “Old, Weird America.” Among the knick-knacks are vanitas objects such as Death wearing a Rappin’ Hampster cap, a cow skull painted by Max Snyder at age five and a Harlequin figure supporting an extinguished candle. In the middle of the gallery, Snyder built a campfire on a Persian carpet, a potent symbol of the clash between the frontier and civilization. 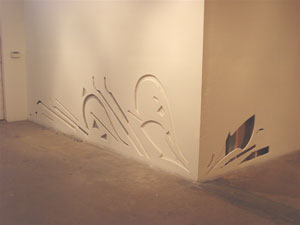 Chris Sauter shows how dreaming helped him to escape from the double-wide trailer that was his childhood home. He meticulously re-created his childhood bedroom using many of the original objects that he cherished, such as a Swatch poster, a collection of National Geographics, pop music cassette tapes and a map of the world. Then he cut a series of different-sized circles out of the walls, windows and doors, which he used to build a telescope that stands in the middle of the darkened room. Light shines through the holes in the walls like stars, creating a magical space where a child’s imagination can roam unshackled from the confines of a dreary, soul-deadening trailer park. Outside in the main gallery, Sauter cut parts out of the Blue Star’s drywall to build a fragile replica of the plow that broke the plains, the primary tool that civilization used to tame the West. 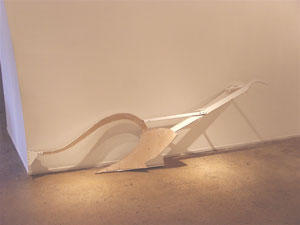 Disney sanitized the West for generations of American children through the adventures of Daniel Boone and Zorro. They stand with
Pinocchio, Peter Pan, Sleeping Beauty and other Disney characters gazing out from behind the looking glass in Kelly O’Connor’s dazzling
installation, which makes viewers feel like they are on the outside looking in. She used yarn to reproduce rays of light that seem to be shooting out from the magical world of Disney. You feel like the characters of your childhood are about to step into reality, much like Amy Adams’ cartoon princess in “Enchanted,” but there’s also the sense that maybe danger lurks in breaking down the barriers between reality and fantasy. Outlined in thick black paint that drips down the wall, the Disney characters and puffy clouds appear to be weeping. Perhaps they realize, as the Kris Kristofferson song says, “Freedom is just another word for nothing left to lose.” 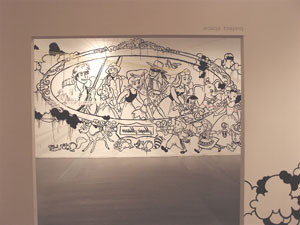 As an artist intimately familiar with the San Antonio scene, Snyder brought much more insight and focus to this show than previous Blue Star summer surveys curated by out-of-towners, who usually took a juried approach. Lonely Are the Brave has a theme familiar to anyone who understands the artist’s plight in Texas, struggling to survive in an aesthetic frontier far from the urban confines of much of the rest of the art world. A longing for the imagined freedom of the agrarian past still underpins much Texas art. Most Lone Star artists have a love/hate relationship with the state’s history, and they are well connected to the rest of the art world by computer and airline ticket. But most will agree that being an artist in Texas is a lonely proposition, requiring the courage of convictions out of step with the culture of football and pickup trucks, even though the state’s artistic infrastructure has improved considerably in the past quarter century.