For Part One in this series, please go here.

This week Alejandro Diaz channels Aesop recalling the 1997 Jesse Amado show at Sala Diaz, Dicha, and how he inadvertently found the moral to the story in a mop bucket; while Jesse takes us back to Madrid, for ARCO 02, the first of a few art fairs that Sala Diaz ventured to, including ARCO 03, Stray Chicago a couple of times, and Suite, the Dallas Art Fair.

Jesse refers to his ARCO experience as a time when he felt his choice to become an artist was somehow verified, as if the transformation he alluded to in Dicha had come true. The series that was installed in the hallway of that show included work in which he smeared gold lipstick on his lips and kissed a sheet of lead, romantically referencing the alchemical formula for turning lead into gold. His dealings with magic are casual, with an eye for good materials, like a chance encounter with a lipstick counter in a department store.

Or Home Depot. Read on.

I had invited Jesse Amado to do a show at Sala. His piece consisted of two digital clocks plugged into the wall sockets and some tinted window shades — all straight from Home Depot, and a thin gold thread on the floor that ran the length of the front room of the exhibition space, connecting the clocks.

Right before the opening I rushed to get the gallery ready and hurriedly began to sweep and mop the floor.

When Jesse arrived, he looked around and said, “Where’s my piece?”

I looked at the floor and suddenly realized I had swept and mopped up his gold thread installation.

Sometimes, I suppose, gold threads end up in a mop bucket. 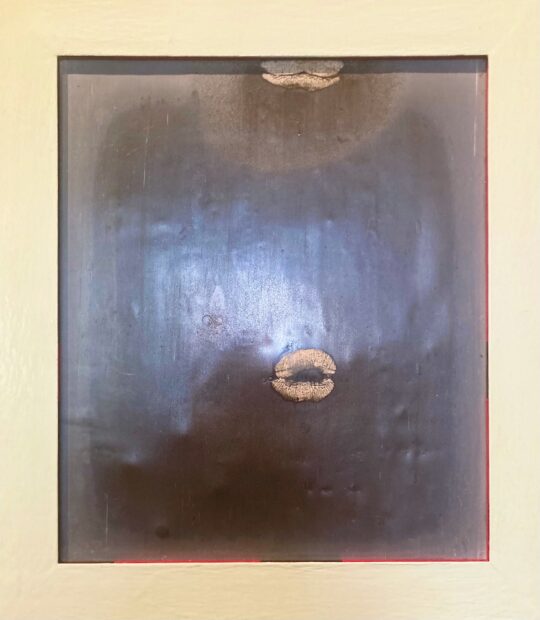 The year was 2002. The City of Madrid, I thought was mild for a February. This may have been the moment of realization that abandoning my expectations of Madrid would be advisable.

It was an exciting moment for Sala Diaz, having being accepted to occupy a booth in this most prestigious art event.

It was outside, in the Sala Diaz back yard, seated on the elongated, wooden dining table (still engraved with gossip from the ’90s art crowd), that I was asked by Hills Snyder to be a participating artist along with Chuck Ramirez, fresh from an Art Pace residency. Hills was Director of Sala Diaz.

Hills and I arrived early, before the others, to install the artwork in our assigned booth. We boarded the subway train lightly loaded with two efficiently packed tubes and headed across town to ARCO. We smiled at each other as we clutched our precious cargo; like two delivery boys on their first day of work. We shyly smiled at each other, holding on as we swayed with train. An advance party of a mission.

Arriving we were escorted to our booth, a corner booth visible from two sides with two walls to hang work. I was somewhat disappointed with the wall space. After a steaming cup of café con leche we proceeded with the installation. In two days we completed the installation as had every other Art Fair participant, and we were suddenly immersed by glorious contemporary art from around Europe. Indeed, the world. 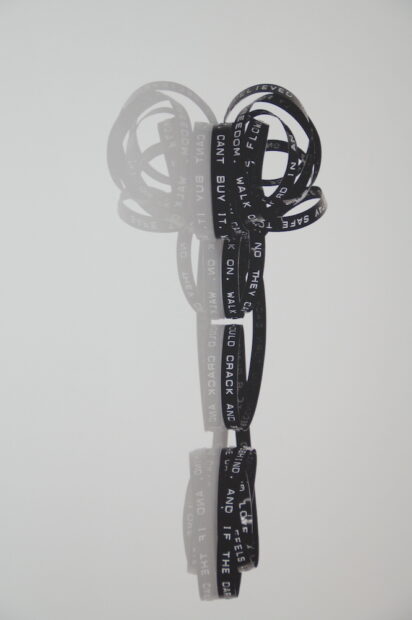 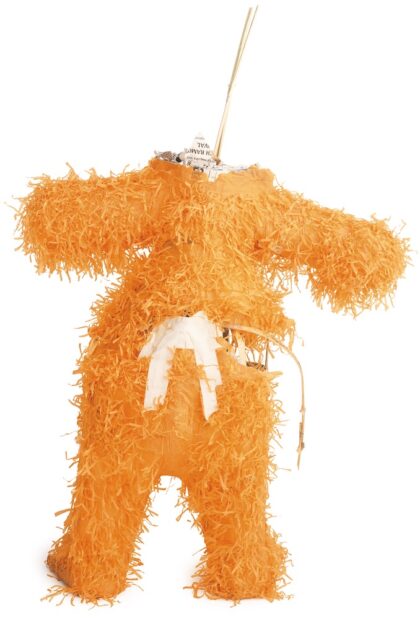 Satisfied, we returned to our hotel and as expected the others from our San Antonio camp had arrived. There was Alejandro Diaz, the founder of Sala; Chuck and Henry Estrada were also there, all three spread out on their beds. Given their wit and humor, I foresaw a trip that was going to result in a mood for finding and making amusement. Before long we headed out and joined the crowds of people on the streets. Not far past the Museum of Sex, we stopped at an open-air café for food and libations. Taking our place on stools along the sidewalk, we gazed as people wandered by in this Iberian “mise-en-scène” (puesta en escena). We were all charmed and seduced.

As we wandered the streets, we marveled at and embraced the culture. Myself in particular, given that my father was a first-generation Spaniard/American.

Meanwhile back at our hotel, I stepped out on to the narrow terrace breathing in the chilly breeze. The din in the street grew densely louder as the night wore on. A cacophony of pleasure and living emitting from the nocturnal denizens.

The next morning, Hills and I returned to ARCO to begin our occupation of the Sala booth. Entering the hall, we made the walk to our post. I was astonished at the amount of art to be seen. It was my first, first-rate international art fair. We passed the booth that Franco Mondini-Ruiz occupied. He was accompanied by curator Victor Zamudio-Taylor, and we all embraced emphatically.

We took turns manning the booth. Hills would alight and disappear in to the crowd. Upon his return, I would take my turn in to the current spectacle of art. I remember telling myself how satisfied I was that I chose to commit and trust myself in becoming an Artist.

We would leave in mid-afternoon after the arrival of our reliefs, Chuck and Alejandro. We would take this opportunity to explore Madrid. Hills would go in one direction and I in another. The plazas and the parks that the world praised were indeed spectacular. Settling down with a glass of Rioja and smokey jamón Ibérico to savor, as I contemplated the delightsome experiences. My tendency was to inhabit the role of a “flaneur,” strolling aimlessly, lounging and becoming the enthusiastic observer of contemporary life in Madrid.

And so it went … each proceeding day the crowd grew larger.

The art became very familiar as I repeatedly returned to the booths that showed my favorite works. The fair was visited by royalty. The King of Spain took a quick tour and glanced over at our booth, while strolling by with is entourage. He looked disinterested as if he was obliged to attend. I have not encountered a bona-fide king this closely since.

One morning, Hills and I took a full day to explore the art museums. I, in particular, wanted to position myself in front of the Velásquez painting Las Meninas at the Prado. But first we went to the Reina Sofía Museum and marveled at Picasso’s Guernica. The gallery it was in was dedicated solely to it. Viewers were strolling back and forth in front of the painting, which is “the most moving and powerful anti-war painting in history.” But what struck me most was the size and scale of it (11’ 6” X 25’ 6”).  Leaving the Sofia and Cubism & Surrealism, we headed for the Prado. The collection there was stunning and filled to capacity with such splendid works that were both familiar and unfamiliar. We took our time to become acquainted with what seemed such strange, yet still fresh works of art.

I braced myself before entering the Velásquez gallery. It was oval-shaped and spacious with Las Meninas at the far end and the obligatory bench perched directly in front of it. I also perched myself upon the bench … becoming somewhat mesmerized for what seemed like an eternity. I was enthralled and spellbound. How could I not be, sitting in front of my favorite painting?  With the fourth wall now penetrated, the Artist was now positioned in the mirror, eyeing me, like the Mystic Lamb of the Ghent Altarpiece, raising questions of reality and illusion.

Recovering, I pried myself away and went to view the Goyas, which left me intoxicated and fearful. Together we completed our visit by spending ample time in front of Bosch’s painting, Garden of Earthly Delights. We were surprised by its scale, both anticipating it would be larger. The thousands of menacing figures seeming to be incessantly reaching out to me. Grasping at me. Clutching at my soul. Relevant still, not unlike today’s social and political apparatus.

We emerged from the Prado, barely escaping its enormity. Rendered by our shared experience, I had to ask: “Why are we even doing this?” (being Artists?) After witnessing art of such magnitude, that question had to be asked. We both knew why, but it was left unspoken. I knew that we would be ultimately shaped by our stay in Madrid. I want to say that we were ordained. Affirmed. Invested for Life as Artists.

Jesse alludes to amusement and jamon. Both were abundant at ARCO. They brought us a bottle of wine each day and the massive exhibition hall was well stocked with a variety of well-spaced food booths … all serving the same thing: croissants, baguettes and jamon.

One afternoon Chuck and I set ourselves up as observers, creating a typology of art fair attendees, mercilessly making verbal cartoons of everyone, including ourselves.

Alejandro propped a “French Kiss Needed” sign against the corner post of the Sala booth and made a few more on site, including this beauty: 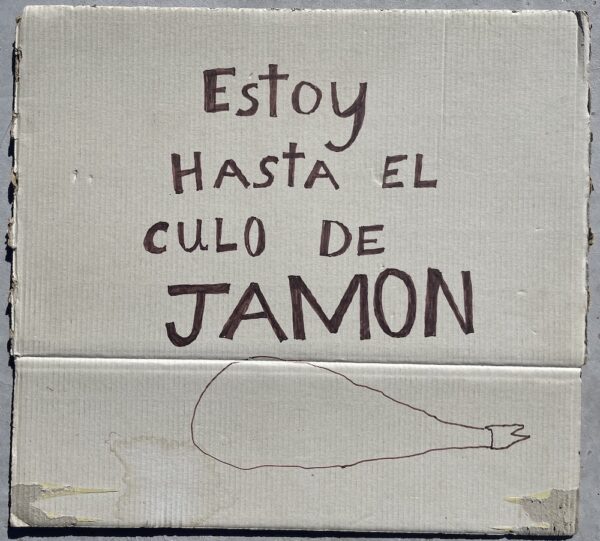