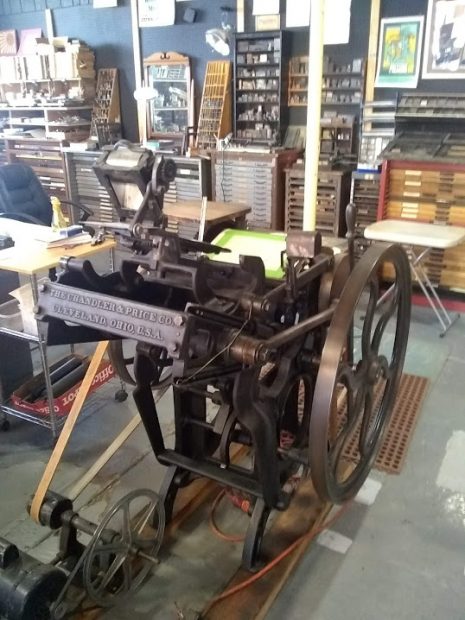 I awoke in a lavender pre-dawn and lay in bed as the sun rolled in like the tide and the mountains began to bronze. My dance card for the day was full. Hills Snyder had arranged to take me around to several of the interesting residents of Magdalena and their spaces. First up was coffee at the Village Press, a downtown airy building run by Laurie Taylor Gregg and filled with working antique printing presses. Magdaelana is a place where people collect many things — telescopes, printing presses, rocks, scrap metal, sound installation pieces — and all seem to have a deep and proud knowledge of their possessions. The desert is a good place to store objects — it’s dry and the light is keen to lay things out in. 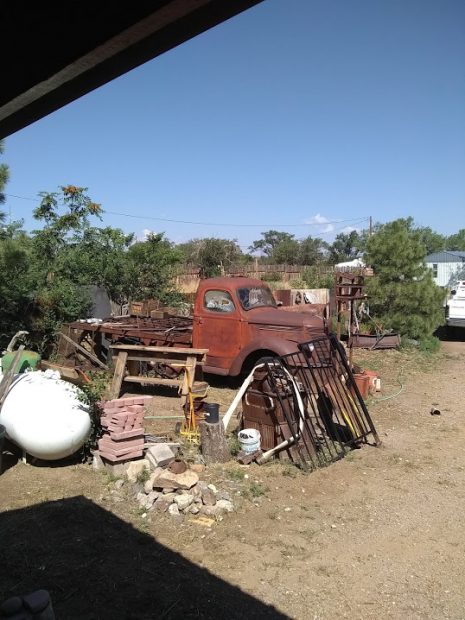 Next, we popped into the trading post and tourist center, run by a salty but cheerful woman named Kim. Throughout our visit, people wandered in asking for scrap metal, springs, and other detritus. “People come in here looking for the damndest things…,” Kim laughed. I settled on a slender Kachina doll made by an artist in a nearby Navajo reservation. 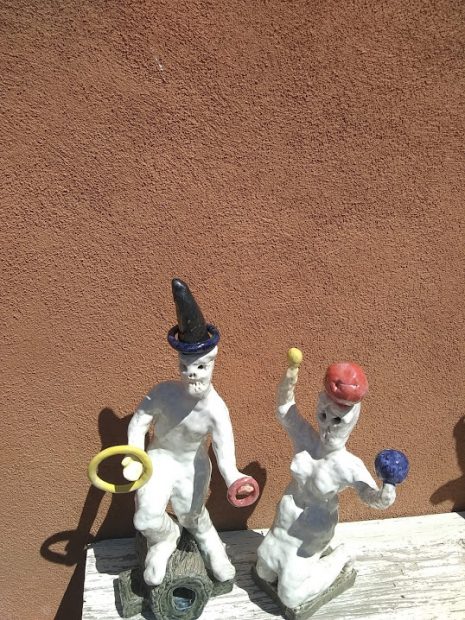 We drove back up the hill to Sigrid McCabe and Michael Bisbee’s house to visit Sig’s studio. Sig is a ceramicist who makes bright, lacquered pieces rooted in myth and symbolism — a Greek Siren that is half bird, half woman; some Samuel Beckett-esque clowns frozen in anguish. She is a skilled and imaginative sculptor and her works look like the artifacts of a lost island civilization in the Mediterranean. Sig had taken a long break from sculpting after the election of Trump — a depression settled over like a sand storm and sapped her creativity. Her recent return is buoyed by an optimism of renewal. Sig mentioned that she was beginning on a project of sculpting the residents of a “town”. “The town of Magdalena?” I asked. “More like the town of all our lives,” she replied. 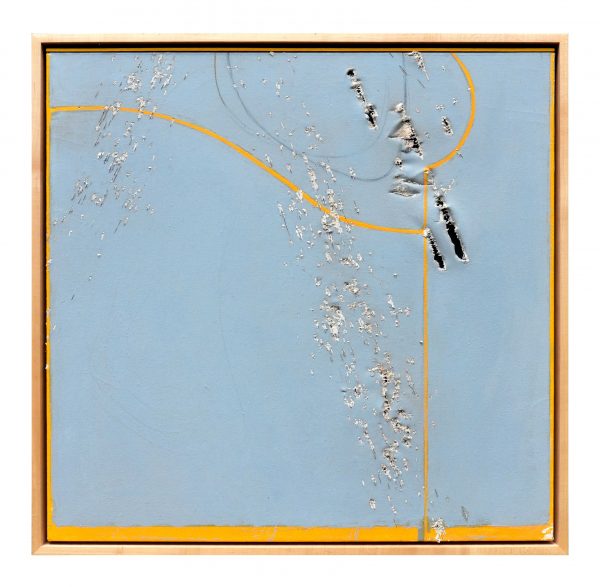 I drove back down to my guest house, which was located in a building off the town square that also housed Michael’s studio. Michael had worked in PR/Accounting for such major New York galleries as Jeffrey Deitch and Mary Goodman. His own work are cool, minimal abstract pieces that he’s taken to shooting with buck and birdshot. Shooting the paintings creates a tactile curvature, a blurring, not unlike the desert sand, pocked and sculpted by the wind. “It’s like a vacuum here, the desert is a white cube for you to create in.” Michael remarked and articulated something profound about New Mexico. The state’s absence is its wealth: a bounty of blankness to luxuriate in and dream. He made me think of the great Mark Strand poem, “Keeping Things Whole”:

In a field
I am the absence
of field.
This is
always the case.
Wherever I am
I am what is missing.

When I walk
I part the air
and always
the air moves in
to fill the spaces
where my body’s been.

We all have reasons
for moving.
I move
to keep things whole.

I often think that is what draws me to sleepy and serene places: the luxury of parting the air and feeling what remains. 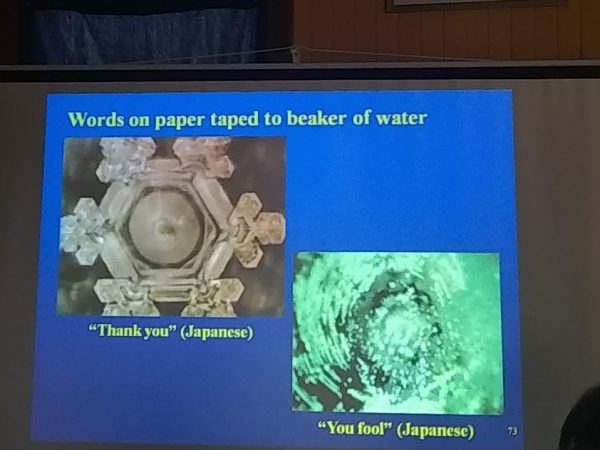 An image from the “water lecture”

Hills had mentioned that there was a “water lecture” at the library at 2pm and I idly thought it was going to be some sober and dry (pun intended) lecture about water scarcity in the Southwest. Water in this region is as contentious and bitter as it is amongst the Harkonnens and the Fremen in Dune. However, the lecture was emphatically not about the scarcity of water. Instead, it was one of the most esoteric “presentations” I’ve ever witnessed (and I once watched a man sit on a giant scale and receive his weight in gold). Writer Kathy Goss from a town of 35 residents in Death Valley, California (“we just got our first Airbnb” she commented wryly) is one of those truly outré western bohemians that is operating on a plane that makes you rethink your supposedly countercultural lifestyle as the equivalent of “catching up” at a Panera Bread. Goss is a sound artist, spoken word poet, and had authored a book on Darwin written in a very unsettling, made-up pidgin language. Her presentation posited that water is actually a supernatural, “etheric” material that among other things can retain memory, respond to emotion, and has a preferred way to be stored to maintain its vitality. It was a very dense lecture and at points was abjectly absurd, but I walked out refreshed and inspired: finding a spiral to swirl down like “live” water is quixotically noble, much more so than being a deficit hawk. 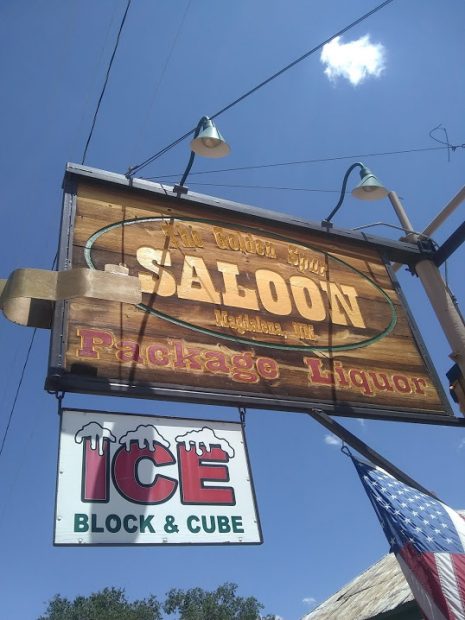 Reeling a bit after the water presentation, I stopped for a beer in the lone bar in town, The Golden Spur Saloon, before heading over to Warehouse I-10, a converted feed store turned into a spacious gallery by owner Catherine DeMaria and her spouse Athena Gassoumis. Athena’s father, Demetri Gassoumis was a Greek artist who studied with Richard Diebenkorn and hailed from the island of Hydra. He helped Leonard Cohen buy his house on Hydra (you can see the cool white walls on the back of the album Songs from a Room). Athena grew up around Cohen, Cy Twombly, and other bohemian 60s luminaries. This was a recurring experience in Magdalena: finding myself talking to people that can appropriately be described as incredibly interesting. Demetris’ beautiful, spacious large works of Hydra are on display and forge an echo to the landscape of New Mexico. The desert becomes the sea, wide and implacable. The warehouse includes works by Michael, Sig, and also striking pieces by Mery Godigna Collet, a Venezuelan artist who works with various oils, petroleum, vegetable, etc., to create pluming lacquered pieces charged with the energy and menace. 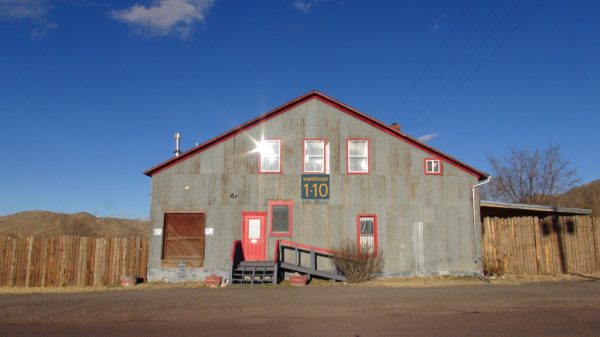 That evening was the opening of Hills’ show Your nowhere is my somewhere, see you there. Hills: “Collected photographs of abandoned buildings, neglected landscapes, peripheral sites, pretty much anything out of the way or overlooked. These photos form the basis for drawings which organize movement, gesture, color, sometimes recognizable objects and locations into new and formerly unknown spaces as anything seemingly unimportant is celebrated as a good place to be.” The drawings are playful and strangely lush, like western Kandinsky miniatures, and seem to visually process the negative space and absence abundant in the west. The memory of a place recedes but in its place remains a potentiality, as if anything could sprout up like palms in an oasis. 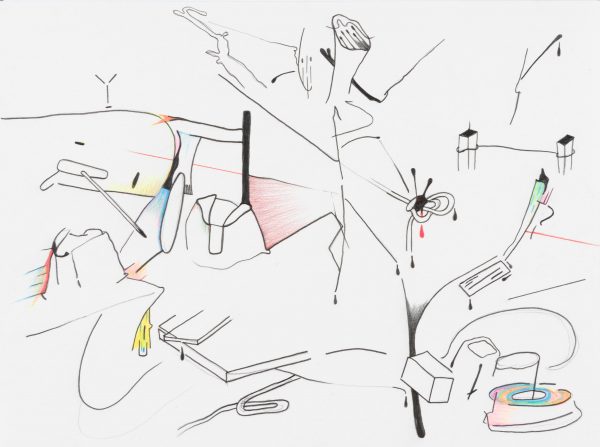 A drawing by Hills Snyder

Eating in Magdalena is a persistent challenge and makes Marfa seem like the Lower East Side. After Hills’ opening we headed back to the Golden Spur, which sells frozen pizzas (they cook them for you), and sat out on the patio and watched a neatly-dressed cowboy pull out a guitar and play the hits. “How about Me and Bobby Mcgee?” I asked. “Lemme try…,” he chuckled before nailing it. 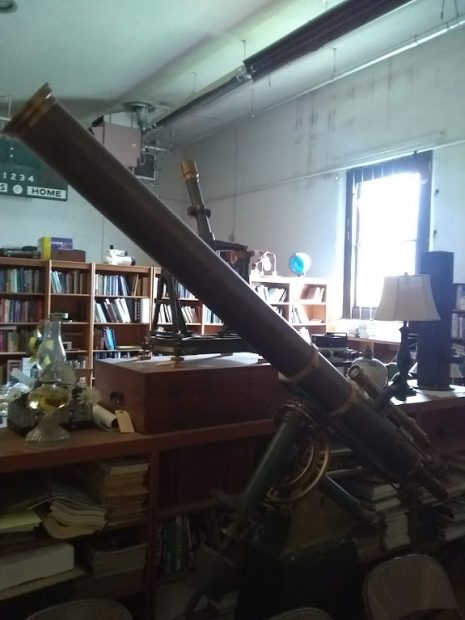 A telescope at the Magdalena Astronomy Society

The next morning Catherine and Athena kindly hosted a brunch at the Warehouse and before I left town. We stopped by the old Magdalena WPA gym that had been bought by John Labrecque of the Magdalena Astronomy Society. It was filled with wonders — hundreds of telescopes ranging from the mid-19th century to present, along with entire collections of astronomical and physics journals and magazines. I found myself almost tearing up by the simplicity and altruism of the space and its mission. Once a year in October, the group hosts a star party on the flat area behind the gym, pulling out the incredibly rare and priceless telescopes to view the jeweled, glittering sky. 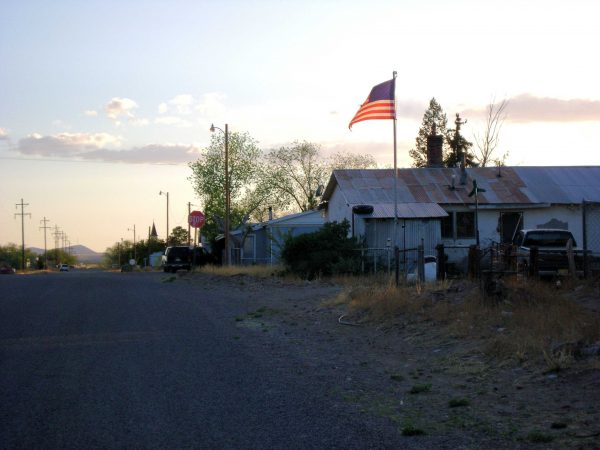 I left Magdalena and spent the night in Truth or Consequences, New Mexico, a sleepy hot springs town happily stuck in the 1970s. Staying at a clean, new-age hotel (pure moods like music wafted throughout the grounds) and soaking in the communal tubs, I rested for an epic drive back to Texas in the morning. I woke in darkness, driving 700 miles straight from Truth or Consequences back to San Antonio and then to Austin to catch the 4k restoration of Andrei Tarkovsky’s Stalker. Tarkovsky shot the film in irradiated Russian locations, eventually leading to his and several other members of the crew’s deaths from cancer. (He literally died for his art.) Based on a science fiction novel, Stalker depicts a world where a “Zone” has appeared, a place slightly off and unreal, perhaps malevolent, and definitely supernatural. It has been cordoned off by the military and “stalkers” (guides) illegally lead people through the Zone. The Stalker takes two archetypal figures, a sensible scientist, and a cynical, weary writer through the Zone, eventually leading them to “The Room” where one’s innermost desires are fulfilled (do not worry about spoilers if you haven’t seen Stalker, it cannot be spoiled, only experienced.) The writer is offered to look into the room, but refuses; he knows he is of ill spirit and remarks: “I will not pour the filth of my soul on your heads, instead I will remain grunting in my private villa.” I thought about Magdalena during the film, how the color of the desert matches the sepia tones used in the cinematography of Stalker. How the specter of atomized death is one part of the state’s identity, same as Siberia. How the beauty of the desert, of the Southwest, of a country with so much space, is that it allows for one to find their private villa and grunt in peace.