Fontenot allows that the process began as a conversation with Sherer about bringing in Art History students into Sala Diaz as interns:

“Art History professor, Dr. Scott Sherer provided the introduction to China with the understanding that I was interested in finding a fresh generation of people with which to infuse the organization. As Whitby’s advisor during this arduous process, Sherer pointed out that she is gifted and enthusiastic about working with San Antonio artists while she pursues her master’s degree. When I was becoming acquainted with China in our initial meetings, she spoke about her work with the UTSA archives, so it occurred to me to inquire about the university’s interest in the Sala Diaz archives, allowing them to be available to both scholars and the general public. In no time at all, we were in meetings with the archives directors/managers Amy Rushing and Katie Rojas (who has since moved on to work for the University of Virginia) about the potential acquisition. Within a few months, the bulk of archival materials were at the university and being digitized, while contributions from the personal collections of past directors Alejandro Diaz and Hills Snyder trickle in.”

This is a big deal. It has been fifteen years since we became a 501C3 non-profit, and eight years since Mike Casey deeded the property to us, so the archive finding a home at UTSA is yet another milestone.

The archive agreement will be accompanied by a public opening at Sala Diaz on Friday, September 24, in which some of the same materials will be on view for two months, leading up to a year of exhibitions with founder Alejandro Diaz as curator, including a 2022 solo project by 2021 Texas State Artist, Celia Álvarez Muñoz. China Whitby will also be working with Diaz on subsequent programming.

At some point in the conversation with UTSA, it occurred to Fontenot to ask around for some gallery anecdotes — stories triggered by all of us going through the natural mementos and detritus that accrue in the wake of an artist-run-space. Toward that end, various artists and others associated with the space will be sharing memories in narratives that might offer something other than the usual texts presented by press releases and reviews. These will be of the “you had to be there” variety — just another way to continue the proud Sala Diaz tradition of puncturing the institutional façade.

For now, I’d like to mention a couple of shows, early in the history of the space, that serve to illustrate the aura of anything-can-happen that has been the legacy of Sala Diaz from the beginning.

Alejandro had left in the summer of 1997 for the curatorial program at Bard College in upstate New York. There was a year-plus of his programming still on the calendar into most of 1998, but one solo project was still on the books for 1999 — David Zamora Casas. His show was remarkable on a number of levels, not least of which was David himself. We first met in the late ’80s when he worked at the flower shop on San Pedro & West Craig, so you might say I got to see his work in progress. We didn’t hang or anything; I only saw him at openings, parties or other social events, but it was a privilege to see him evolve the walking art work that he is.

For the first couple of decades of Sala Diaz, the openings followed a pattern set by Alejandro — Friday nights, 7 to 11 PM. These events were never over until at least midnight, occasionally not until two in morning, but David’s show, Cuentos de la Llorona and Other Oral Kiss Stories, topped them all. There were still plenty of people there at 3 AM. It was winter; we had a big fire going. Very suddenly, at about that hour, three or four singers appeared. Ringed around the fire, they sang a capella. Ethereal harmonies with all feet planted in the earth. It was a moment I will never forget — an affirmation of everything that art aspires to — community, beauty, inclusion, spontaneity, the un-nameable essence of existence.

I went home about four, knowing that I’d be back at six, as it was habit — a ritual really, for me to be back at Sala in the early mornings to clean up the post-opening yard. The dawn quiet was a way of re-entering after the revelry of the previous night. This was something I always did alone, but this time there were still people there. People who had been at David’s opening all night, testimony to the solidarity of the communities in San Antonio and to the respect these communities hold for his work.

I didn’t want to interrupt the magic to find out that night, but I’ve always been curious about who those singers were. Just the other day, I asked David if he recalled. He didn’t, but that only speaks to how spontaneous it all was. There could be one hundred conversations or small social explosions going at once in the compound that included Sala Diaz on opening nights. They all co-existed in the flow, even though frequently unknown to each other.

Here is what David had to say when we spoke:

“I do not remember singers! Wow. I must have been feeling no pain. I remember Sandra Cisneros and eminent art scholar, Tomas Ybarra Frausto, were there. I am grateful to have had the opportunity to express my belief that communities need to talk openly and honestly about sex and gender identity. The Sala Diaz show was particularly important to me as a Catholic Latino gay man navigating the fearful time of the aids pandemic. Thank you for allowing my art to shed light on the darkest days of HIV/AIDS.” 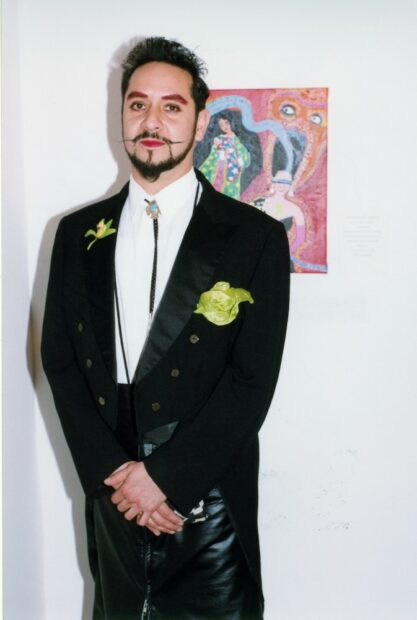 December 2001 there was a Christmas party at Nate Cassie & Ethel Shipton’s house on the East Side. Rae Culbert, just shooting the breeze, brought up an idea. It was something that would require some serious permission from Mike Casey. We immediately agreed to do it, once we got the go ahead from Mike.

Mike Casey is not one to say stop when art says go, so I already knew what he’d say, and the following spring, Culbert and crew began digging.

I’ll just walk you through it.

The first thing to notice is that the entrance to the gallery is completely blocked, as are all the windows. Each opening is covered with a sheet of used galvanized tin roofing, mounted at an acute angle coming out from the window, thus forming a chute with the top open and the bottom edge closed. The sides are also closed. A receptacle, its contents obscured.

Is there another way in? There does seem to be some brush cleared along the south side of the house, even a lit entrance, but we’re going to continue this tour backwards.

You’re standing inside Sala Diaz, slowly walking the two galleries and the hallway, playing the walls with a flashlight you collected on the way in. Through three windows and one door you see the same thing — mainly dirt, with rocks and roots. The overriding impression is that you are underground. And more than that, you are inside a house that is underground. The debris flattens against the transparent window panes, creating a suffocating pressure.

The title of the piece, Tora Bora, is named for the complex of caves that were said to be the hiding place of Osama Bin Laden in eastern Afghanistan in the months following 9/11. As represented by Rae Culbert, it’s cave cum cul-de-sac. It’s like a hideout, but one that is inescapable. Though we’re inside, we’re outside due to our status as viewers, and we can leave anytime, even though this art is immersive. Even so, Tora Bora was brilliantly analogous to the entrapment that fundamentalism leads to. If scoundrels cling to patriotism, or to a cult that stands in for it, they may find that the refuge is more like being buried alive, a confinement within an ideology of contraction, walled off from the diversity of human experience.

Would I have come up with that interpretation 20 years ago? I cannot say. Far right ideologies are nothing new,  though it’s clear why I’m doing so now. Back then, the perceptual double-take was enough to release the power of the work. These days, when a defeated ex-president encourages home-based extremists (still, even this week), the piece reasserts itself.

But on the tour, we’re still inside the gallery.

You’re exploring in the dark, finding your way, illuminating the dirt pressed windows. When you’re satisfied with what you’ve seen, you go back the way you came in — through a trap door in the bathroom floor. Climbing down a steep set of steps, a functional compromise between ladder and stair, you’re now standing upright under the house in a dimly-lit space. You walk a few feet to another ladder/stair, the way up and out, but first you hang the flashlight back where you found it, conveniently placed to grab on your way through the trap door.

So, yes, the brush along the south side had been cleared, offering a way in to an otherwise sealed house. You went alongside it, then under it, into a space dug deep enough for standing. Before you climbed up and into the gallery, you may have wondered what was done with all the dirt, a thought that leads to considerations of displacement and how this figures in a world in which terrorists hide in caves or walk the streets in guises of normality.

These stories, and those that follow, paint a picture of an artist-run-space of humble beginnings, grass roots that will never harden into an institutional surface, just folks that give a damn, getting it done. Sala Diaz is above all artist-centric. And you know artists. They can do anything.

I agree – thanks, because David Zamora Casas is a national treasure of San Antonio!