by John Navarro May 2, 2002
FacebookTwitterEmail

The modular network of caves in the real Tora Bora are as well stocked and maintained as any Bond villain could have done. Far from bare rock holes, the caves and their complementary karez (manmade water systems) are essential to life in the water-scarce rural regions. 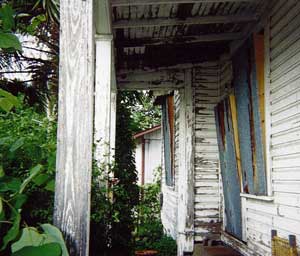 Numerous news graphics have shown cutaway sections of caves with silhouetted antlike soldiers busily moving a palette of Kalashnikovs here, a bundle of missiles there and sleeping in neatly arranged cots as though at summer camp. They seem to dot the countryside like miniature Batcaves any one of which Osama bin Laden could have escaped from by pulling a switch and disappearing behind a revolving wall. 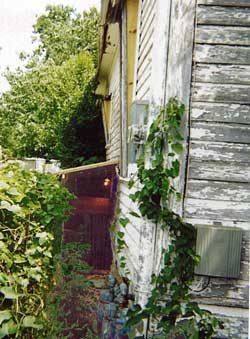 The hunt for bin Laden in the white mountains of Tora Bora, Afghanistan in late 2001 was an episode of anxiety and suspense for the entire world. Somewhere in this uncharted area of the globe, amid the elaborate and ancient system of irrigation tunnels still in use today, the most hunted man on Earth hid from judgment. Parallels to Hitler in his bunker at the end of World War II were inevitable. Bush and Cheney also vanished into their undisclosed locations, safe from…what? The sanctuaries of the leaders of war protect them from scrutiny as much as physical harm. In our homes and communities, where are the safe houses from media over-saturation, governmental snooping, assassins and nuclear suitcases?

Rae Culbert‘s Tora Bora installation at Sala Diaz suggests questions like these with an efficiently staged earth art installation. The experience is initiated upon visual contact with the house. Corrugated aluminum covers windows and doorway completely. The message is clear: this area off limits. However, the site has a hidden entrance around the side through a narrow path between fence and house. Descending into a miner’s shaft on a rough-hewn log ladder, the visitor goes through a short tunnel in which the post and lintel foundation of the house is visible as well as an underground landscape. This is truly a worm’s eye perspective. 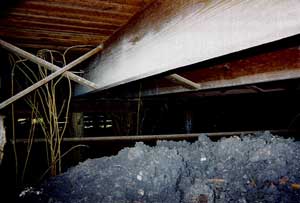 Up again on another log ladder like one of Hogan’s Heroes, the visitor emerges from the floor in the bathroom. Unlike the ammo-littered caves of eastern Afghanistan, the space of the gallery is empty, the walls stark white. The windows reveal the secret of Tora Bora. Earth excavated from the tunnel fills their entirety, framed in by the aluminum outside. No exterior light is visible. The sensation is of being simultaneously above and below ground, encased in conditions of extreme density. The presence of nature in cross section recalls a science exhibit but reads as the view from a subterranean voyager’s craft. As in Walter de Maria’s Earth Room, the visitor is held in check by a massive volume of black oil. In this instance, though, mass is an illusion created by the titular proposition that one has entered a sophisticated adaptation of primitive submerged architecture.

The war on terror is literally that — a war on fear, which becomes by extension a war on the unknown. The events in Afghanistan remain for many a mystery, a vague collection of reports that neither deny nor confirm what exactly has occurred. By entering Culbert’s Tora Bora, vistors are asked to confront fear in the forms of claustrophobia, constriction, darkness and death. It seems to be the end of the road in many ways, devoid of objects and egress. In return, they are offered concealment from danger and sanctuary from peril. They are allowed to cleanse themselves of images, sounds and personalities in a clean and neutral environment and emerge reborn, if they so desire. 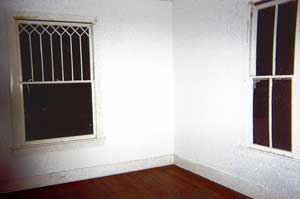 Inside, the windows blocked with earth

The work connects with ideas in early history that regard the earth as the house of the living and the dead. In Native American hogans, renewal and insight came when one descended into the semi-sunken earthen lodge and participated in sacred rites. The oracle of Delphi went into deep chambers to receive the wisdom of the mists. The mastabas of Egypt, burial chambers for the elite, include a false door for the free passage of the ka, one of seven souls. Tora Bora, with its Winchester House collection of dead ends, could be a model home for the new necropolis. It could also be a spiritual center of a living community, holy ground where the trappings of war are not allowed. 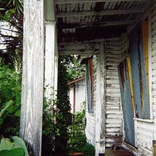