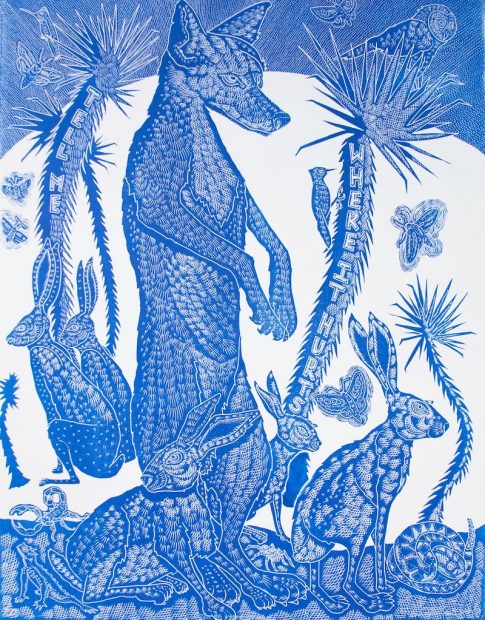 The perversities of memory are such that when I remember my own life it’s a gauzy wave of just a few instances —  some banal, some momentous — so that my history seems as if I went to Home Depot and also stepped out onto the cold marble floors of the Taj Mahal. In contrast, I can remember the plot of a movie I love, say Sexy Beast, in almost holographic detail akin to the character in the Borges story who can remember a day perfectly.

The way culture engraves itself on you is the haunting core of Richard Armendariz’s show Tell Me Where it Hurts, at Ruiz-Healy in San Antonio. Using an intricate lathing system on wood “canvases,” Armendariz creates dramatic, psychedelic pieces that reference music and art. Some of the pieces have lightbulbs embedded in them giving off a diffused, incandescent effect, like seeing a familiar place at night from a distance.

In Coyote as Phaeton, a large striking piece, a coyote lit by bulbs on its paws stretches out before a winding orange and bruised sky. The coyote is a recurring character throughout the show, the trickster god often imbued with a somber, sad energy. In another with the coyote, The Way A Mi Corazon Es Un Bumpy Road, the coyote nudges a snake and the corners of the canvas are framed by articles of kinetic violence and charge — a hatchet, wrench, knife and hand. Many of the pieces are coiled riddles, and the curved engravings spiral around the references to the myth, symbols and culture.

A sort of relaxed mania permeates the work. In Victory Red, a red skeleton has cacti growing out of the eye sockets and mouth; a flag-like speech ribbon announces “loca loca loca,” and a broken arrow sits in front of the skull. The imagery is confounding and heavy with meaning — one thinks of the history of communism, colonialism and the atrophy over all of it. 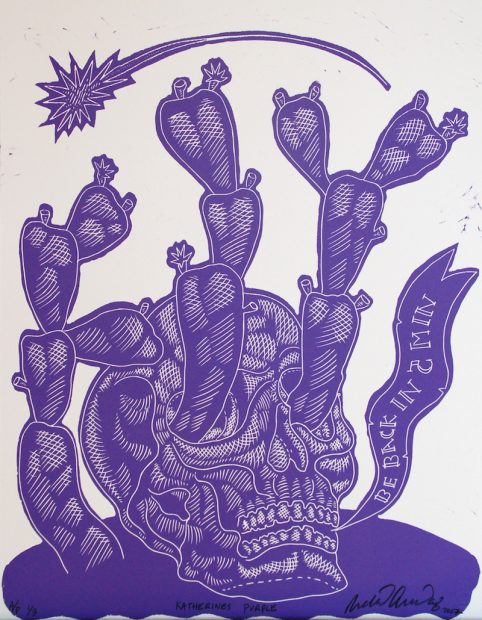 Several works directly reference cultural figures and icons. Wish you Were Here depicts a galleon in a storm, with the words “Wish You Were Here” on the sails. That is of course a reference to the Pink Floyd album, a florid elegy for its lost member Syd Barrett who drifted away via madness and drugs. The stark blue-and-white palette highlights the loneliness of mental illness and loss, of sailing away in the night to not be seen again. 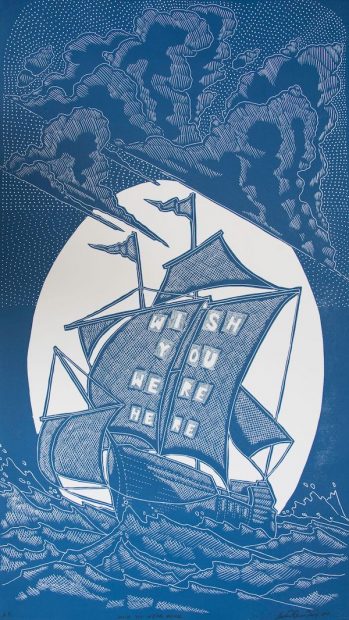 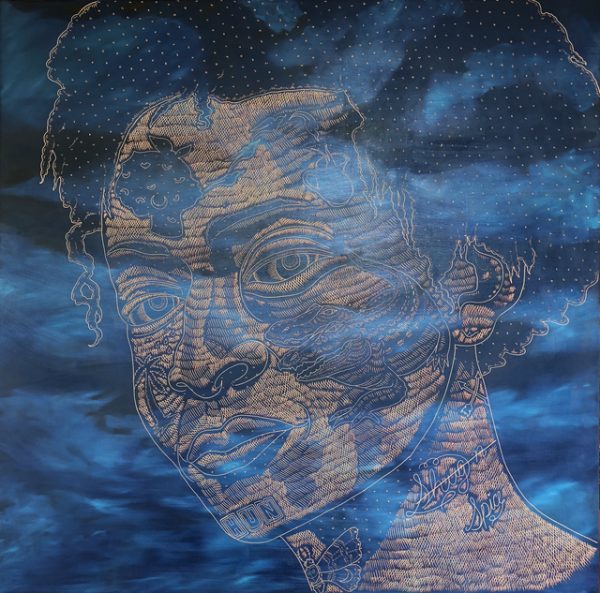 HUN (Kara Walker) depicts the great artist with some of her famous imagery etched onto her face. Through a cloudy blue landscape, the marks of Walker’s career cover her stoic visage, the lines of her history form into the collection of her creativity. Like most of Armendariz’s pieces, there is a simultaneity of beauty and sadness — an elusive core of memory and identity, and the vaporous nature of both.

In addition to the coyote piece, two other pieces employ light bulbs. One is of a plane, the other a ’70s muscle car, both at night with Armendariz’s signature chilly blue landscapes. The longing for escape and freedom radiates from these works and the sparseness of their composition is significant. They are unencumbered by symbols and references, floating in space ready to be boarded, and accelerate away.