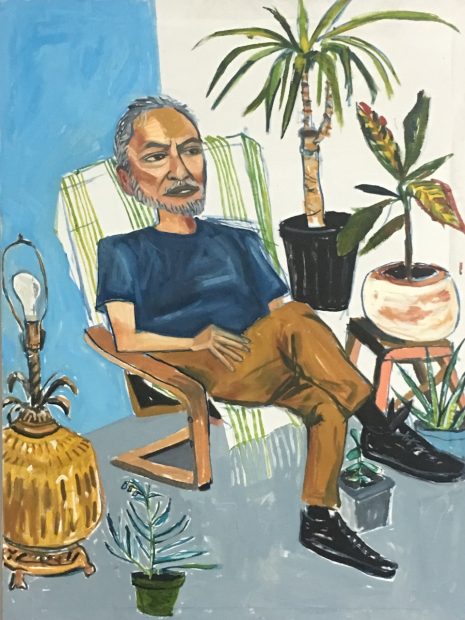 His work acquired by Ruby City, a 48 by 36-inch oil painting titled El Jesse Amado from his EN VIVO PORTRAITS series, depicts a fellow local legend and artist who also has work in the Linda Pace Foundation’s collection. Painted from life, the work seeks to capture the sense of who Mr. Amado is; Mr. Ortiz says that during the two-hour sitting for the work he and Mr. Amado discussed nothing related to art, but instead began by talking about Mr. Amado’s time as a fireman, which invariably lead to other topics. It was from this conversation-during-painting that Mr. Ortiz sought to imbue the portrait with a sense of Mr. Amado’s story. As Mr. Ortiz described the experience to Glasstire:

“These works are not just about the image you see but really are about the time spent with the artist and sitter. The conversation with Jesse was the art and for me when I see this painting I’m not only thinking about every brush stroke and the decisions that allowed to exist on the canvas but also the experience of looking directly at Jesse and hearing him talk. It was badass.”

This isn’t the first work by Mr. Ortiz in the foundation’s collection: the institution also has some smaller prints by the artist that Linda Pace commissioned during her lifetime as a holiday gift to the foundation’s and Artpace’s staff. Kelly O’Connor, Ruby City’s Head of Collections and Communications, commented on what it means for the institution to acquire this painting that is by, for, and about San Antonio’s art community:

“We are so honored to be the stewards of this new work by Cruz Ortiz, we could not think of a more fitting work for Linda’s collection. This portrait of fellow artist Jesse Amado documents an important part of San Antonio’s vibrant art history and continued vitality. Cruz has continuously pushed himself as an artist mastering new mediums, his paintings both embody long standing traditions while bringing in his bicultural contemporary perspective.”