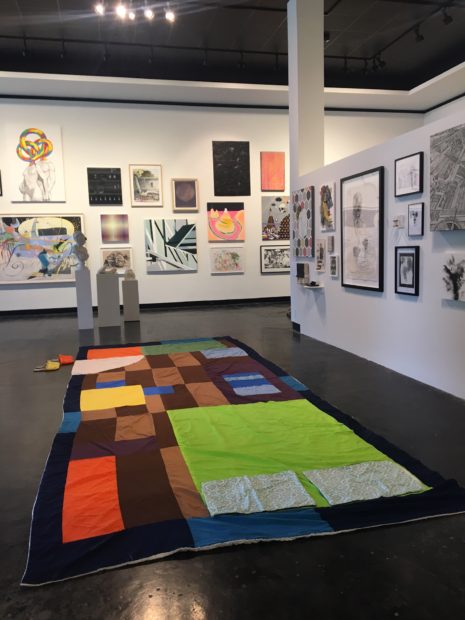 Toby Kamps’ curation of Lawndale Art Center’s annual Big Show is big. Featuring nearly 200 artists, it reverses a recent trend in Lawndale’s eagerly anticipated annual open-call exhibition. The Big Show is historically a sprawling hodge-podge of mostly amateurish (sometimes wonderfully so) paintings, sculpture, photography and more recently, video. Submissions had to be delivered by hand. The Big Show has switched to digital submission but is still based on the same single requirement: that artists live within a 100-mile radius of Houston. This brings artists and works from the far reaches of Texas’ southeast gulf coast, stretching just barely into western Louisiana. But mostly, The Big Show is a show about Houston.

Among the changes in Kamps’ iteration of the show is the inclusion of established artists alongside younger, less experienced or less established artists. Kamps specifically reached out to a number of well-known Houston artists and encouraged them to view the Big Show not as a venue reserved for emergent unknowns, but as a kind of snapshot of the Houston art scene now — a cutaway revealing the complex strata of people and practices that make up the world of art in the rapidly growing city of Houston and its surrounding areas. This decision wasn’t without controversy, and Glasstire contributor Robert Boyd covered some of these reactions on his blog The Great God Pan is Dead a few weeks ago. 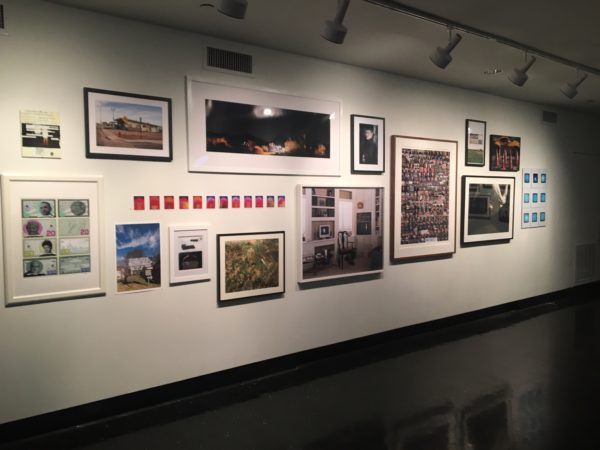 Although Kamps included many acclaimed Houston figures like David McGee and Rachel Hecker, he went big and inclusive, accepting more than a third (really probably nearly half) of the works submitted. I’ve heard the critique from more than one person that if you’re looking for a ground floor of quality you won’t necessarily find it here. But that’s never been The Big Show’s game anyway. One artist I ran into at the show on a quiet afternoon after the sardine-packed opening remarked that the dense, floor-to-ceiling hang with multiple movable walls doesn’t allow any single work to take much of a deep breath. This is all true, though I think the baseline level of quality isn’t too bad. But I like Kamps’ approach for a number of reasons that speak to this historical moment in Houston’s art history. 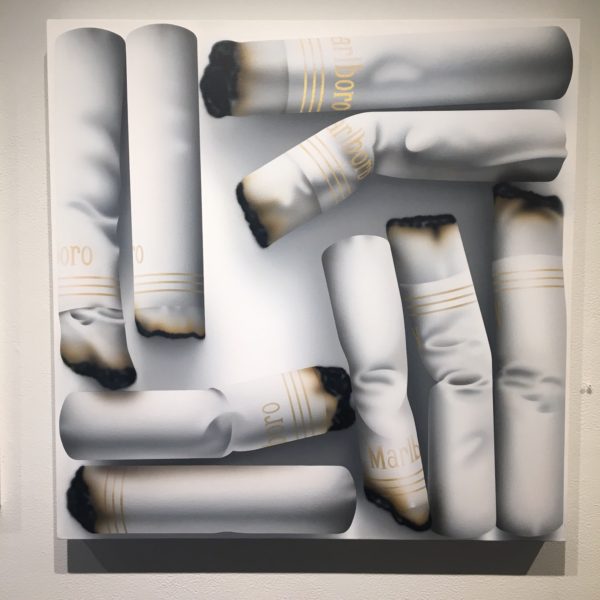 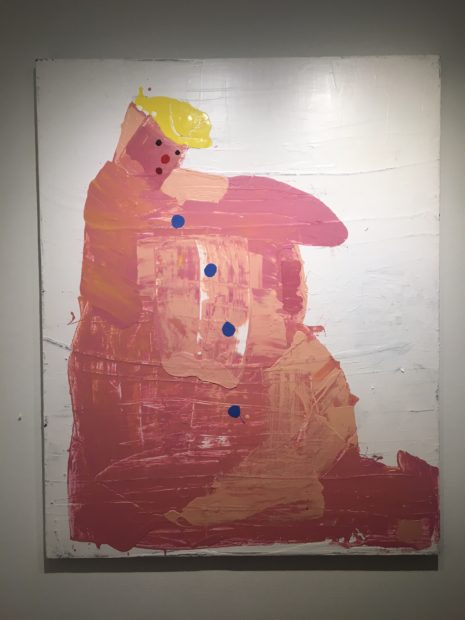 In the last couple of years Houston has grown at a rate that, for those who’ve lived here for at least a decade, seems overwhelming. Driving has become more of a bloodsport than ever, with cars packed bumper-to-bumper on every highway, major road, and cracked side street. Whatever your destination in Houston, plan to be in your car for an hour dodging orange cones and workmen in hardhats. Housing prices are still on the upward curve of the hockey stick, making what used to be an attractively affordable city less and less economically viable for artists. By some estimates Houston is on track to surpass Chicago as the third largest city in the country in the coming decade. And although Texas tea is still the life-blood that flows through the city’s veins, the economy is becoming more diversified. Houston is changing.

To say that this year’s Big Show is a representation of the art scene of Houston and the surrounding areas requires a lot of caveats. It’s an open-call show, and although Kamps reached out to many Houston stalwarts and young up-and-comers, there are plenty of area artists, young and old, who either didn’t submit or weren’t included. Any exhibition with an ambition to represent a certain place at a certain time is always necessarily limited. But Kamps’ Big Show has plenty of opportunities to connect some of the region’s recent and historical dots.

Universities have been (for better and for worse) the backbone of art production in the United States for the last 40 or 50 years. Houston’s namesake university, the University of Houston, is given a multi-generational representation among the nearly 200 works on view. On one wall Aaron Parazette, Laura Lark and Rajab Ali Sayed are installed together. 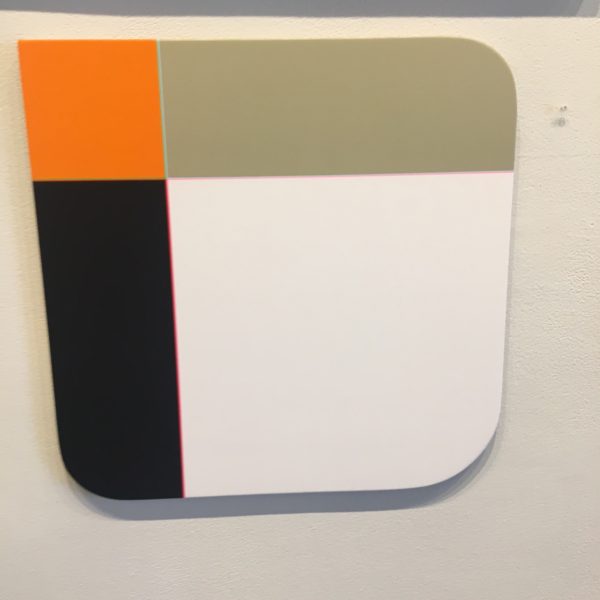 Parazette came to Houston from California in 1990 as a Core Fellow in the MFAH’s artist-residency Core Program. His carefully calculated, razor-sharp formalist text paintings, built on surfer-inspired palettes and lingo, have seeped into the visual language of Houston art and produced more than a few hardcore “tape painters.” Unlike many recent Core fellows who soak up local money and move on to careers spent on planes flying from one site-specific installation to the next, Parazette stayed in Houston, built a practice and continues to teach at the University of Houston. If you’re searching for the hard-edged formalist core of contemporary abstract painting in Houston, Parazette is a good place to start. 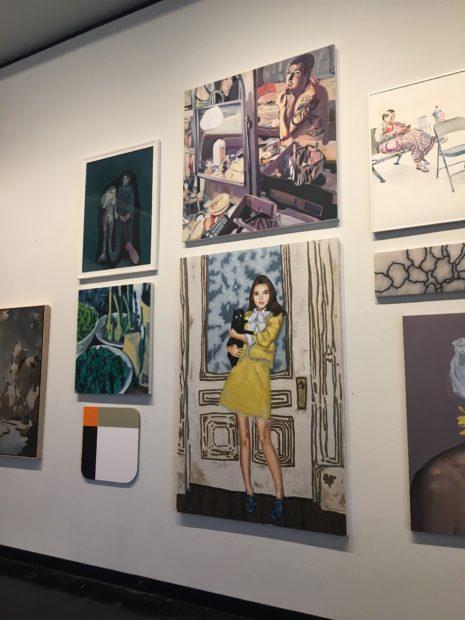 Laura Lark graduated with an MFA from UH in 2002. Lark is known for her huge, masochistically labor-intensive pointillist-inspired drawings and paintings of women based on images from fashion magazines. Her work in this show is a painting on canvas of a young girl in a yellow dress and a frilly white collar holding a cat. Lark’s loose and precise painting technique effectively separates her image from its source material. The scene in the painting looks like it comes straight out of the sixties. I imagine a handsome young Englishman with bad teeth sliding into the scene, knocking pussy out of the picture, and getting to work on unraveling the girl’s Victorian collar in a groovy seduction. Lark’s feminism is riddled with vulnerability, desire and intelligence.

Above Lark a painting by recent UH grad student Rajab Ali Sayed depicts a tattooed man reflected in a mirror applying makeup in front of an array of cosmetics (and a remote control). I reviewed Sayed’s work in the UH Thesis show and his presence here caps a UH timeline between Parazette and Lark that includes many other UH grads in the show, including Melinda Laszcynski, Matt Manalo, Amy Beth Wright and Heather Bause. It’s easy to forget with all the Instagram-ready immersive bullshit by international art stars that a real art scene is built on the bedrock of working artists who make their home in the city, pay tuition, buy art supplies, work the bars and restaurants, man museum and gallery prep crews, ride the adjunct circuit and bring the next generation of artists up with foundation courses at universities and community colleges. Kamps knows the Houston landscape well and his curation opens an authentic perspective onto a scene. 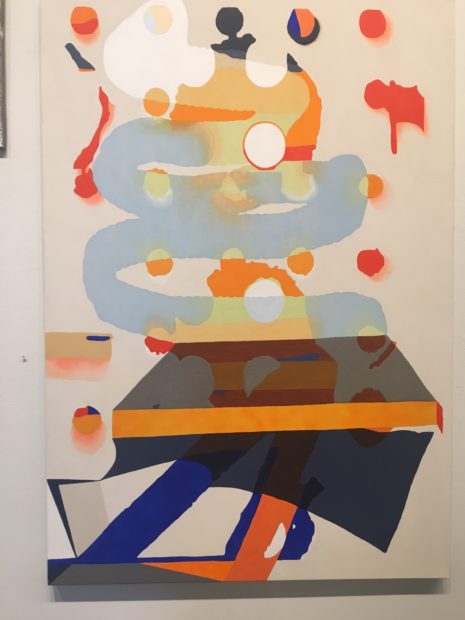 Artists like Parazette and Rob Ruello — the latter represented by a large, digitally designed (complete with faux drips and spray-paint haze) hand-executed acrylic and Flasche abstraction — represent a generation of artists who came to Houston in the ’90s for the Core Program and became part of the Houston architecture (Ruello teaches at the MFAH’s Glassell School of Art). But several paintings in the show give us clues to the generations of artists who preceded them.

David Gray’s smoothly hyper-realistic painting Dot Brings Breakfast depicts Texas Modernists and Houstonians H.J. Bott and Richard Stout at a weekly breakfast with a circulating roster of artists who have come to represent one of the earlier layers in the strata of what Houstonians have come to recognize as the Houston art scene. Stout and Bott create rigorous, complex abstractions. 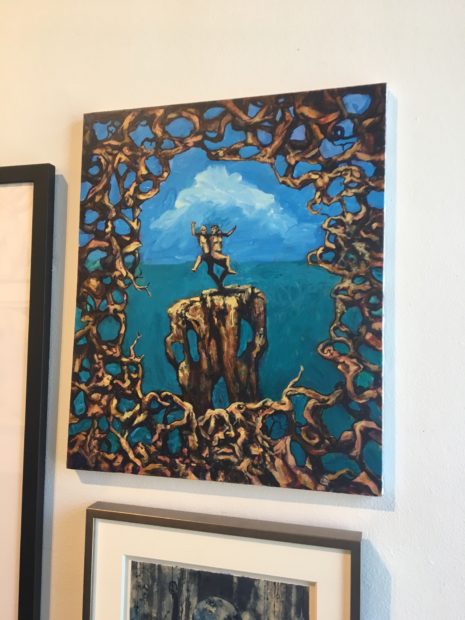 Further away, and tucked in amongst a group of small paintings, is a little canvas by Earl Staley: he represents Houston’s very own “bad painter.” Staley has had a long career and was among a group of artists who successfully rode the first oil-barrel wave of national arts recognition for Houston. Staley was included in Marcia Tucker’s Bad Painting at the New Museum in 1978 and Barbara Rose and Susie Kalil’s famous (some might say infamous) Fresh Paint: The Houston School in 1985. There’s lots of old politics swirling around Houston’s late ’70s and ’80s boom, but from the perspective of Kamps’ Big Show, those politics hardly matter. Each artist (including the many more who are totally unknown to me) opens a window onto a different view of Houston’s current moment and recent history. Find an artist, and Google away.

In general, I think a huge part of the “real art world” has moved from the porn-y planet of big, douchey studios where full-time artists pay grad students $20 bucks an hour to paint 10” x 12” bread-and-butter paintings to a world where real artists make work that emerges out of real life — out of day jobs and the daily grind. Not that that was ever not the case; it’s just that now, the hope of “being discovered” doesn’t even seem like a pipe dream worth having. Political agendas are more rigidly policed than ever in the arts. Forget the tenure-track and break-out exhibition hopes. Get down to work. You still have to eat. 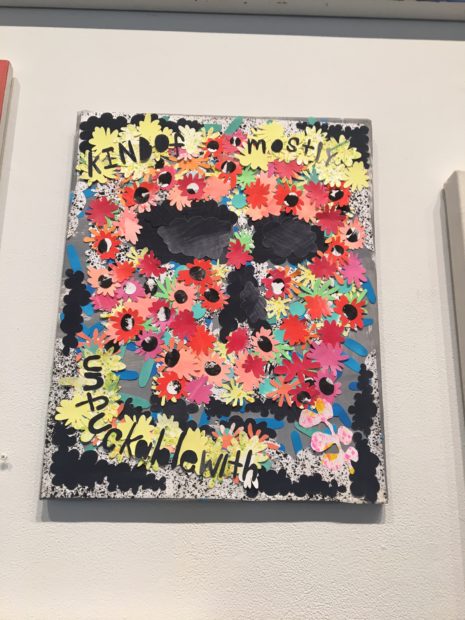 Joseph Wooten’s cheerfully grim collage, kindofmostlyunfuckablewith, depicts a death’s head made of dyed paper flowers through which the work’s title awkwardly snakes. Pretty it up all you want: We’ve all got a skull underneath the skin that’s bound to come out someday. Wooten, also a UH graduate, has spent the decade since his graduation working in the high-end plaster finishing business where interior design, art and architecture come together in a heady, sometimes bizarre mix. Artists learn through the lives they live. Avoiding a desk job is a good first step toward building an interesting life as an artist. 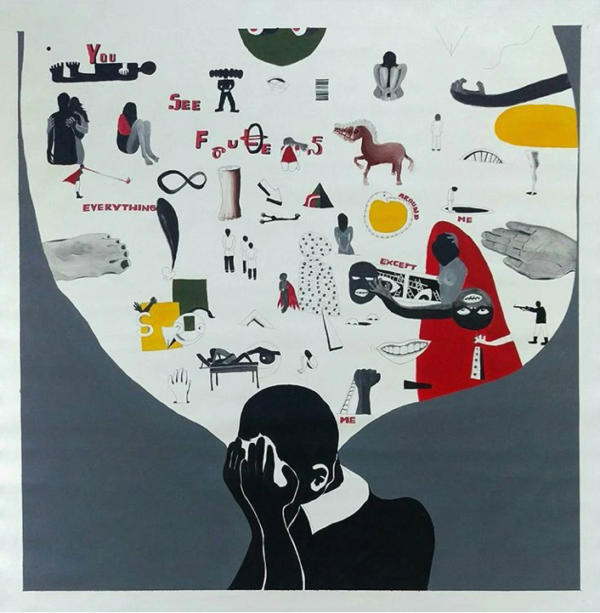 Rahul Mitra, You see everything around me, except me, 2017

Across the gallery Rahul Mitra’s spare, square canvas, You see everything around me, except me, depicts a black figure with a white face hidden behind grieving hands. Emerging from the figure’s head is a thought bubble through which cryptic, open-ended symbols float in a spare atmosphere. Who are we? The archetypes knocking around in our minds? The cultural symbols through which others define us, through which we define ourselves? Mitra’s ink-and-acrylic painting is concisely executed but wide open to interpretation. Mitra’s day job is as the Program Director of the RNA Center at MD Anderson Cancer Center. He develops nanotechnology-based cancer therapeutics. It’s going to take a long time to shake out all the congealed nonsense in the official art world, but when it does happen, I suspect historians will find the real art of the 21st century in the strangest places. 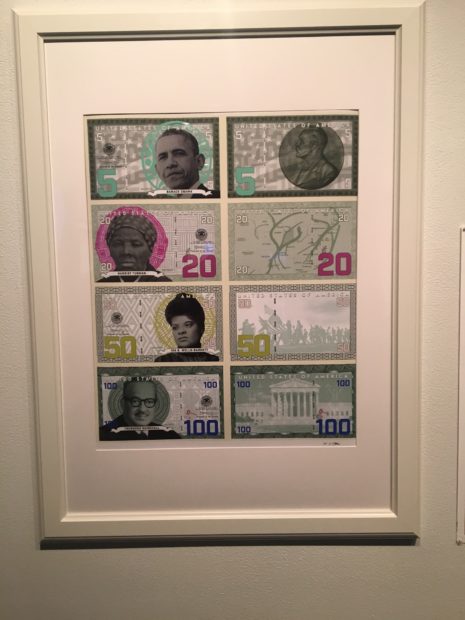 The Big Show’s second floor is devoted to video and photography. Phillip Pyle II’s digital collage New Money depicts, front and back, a 5, a 20, a 50, and a 100-dollar bill featuring the faces of Barack Obama, Harriet Tubman, Ida B. Wells-Barnett and Thurgood Marshall (Tubman is scheduled to replace Andrew Jackson as the new face of the 20-dollar bill in 2020). Deceptively, even didactically simple at first, Pyle’s title, New Money, opens up the seemingly straightforward print to some serious and subversive humor. Liberty in America costs money, and New Money spends as good as old. 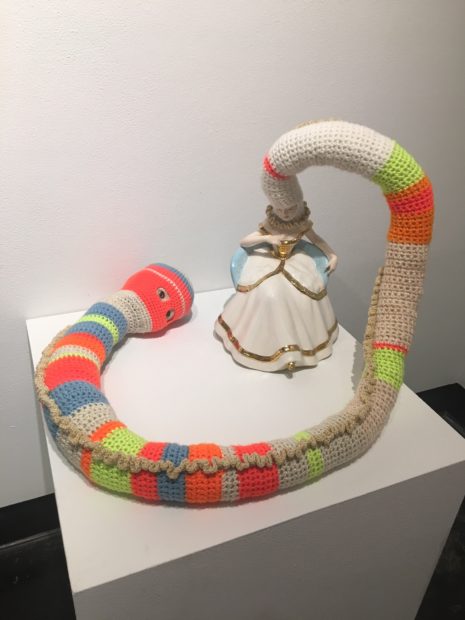 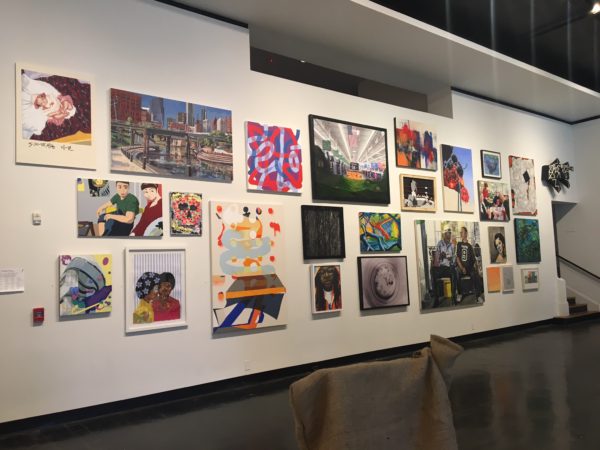 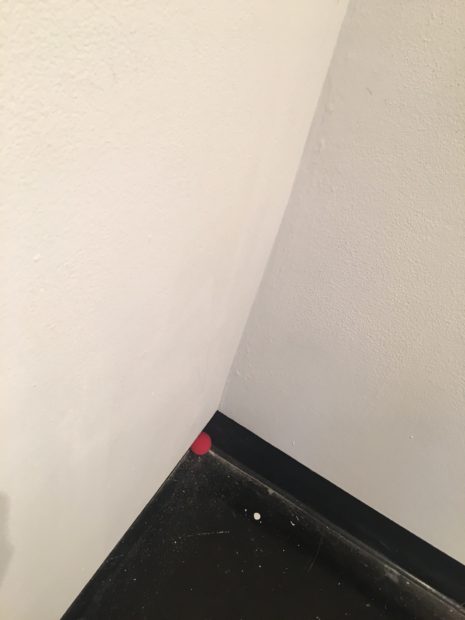 This review could well have been written three times with completely different groups of artists named, opening up more and more windows onto different aspects of Houston’s art scene. Like the city itself, that scene is growing and many of the artists in the show were unfamiliar to me. But there were at least two dozen more I recognize who would illuminate different histories, different connections. Rachel Hecker, Elaine Bradford, Beth Secor, Bradley Kerl, Ariane Roesch, Wayne Gilbert, David McGee, Terrell James, Claire Chauvin, Bret Shirley, Renata Lucia, GONZO247, Michael Galbreth and many more are woven throughout the exhibition. I just burrowed in on one wall and let it lead me on for a few thousand words. Kamps’ Big Show shows that Houston and the Gulf Coast is a rich, wild region full of great (and terrible) art. When this city really begins to believe in its own artists and puts more of its money where its heart is, Gulf Coast art might just light up like flaming oil on the surface of dirty water.

Thanks for the Photo and mention. Surprised and delighted.