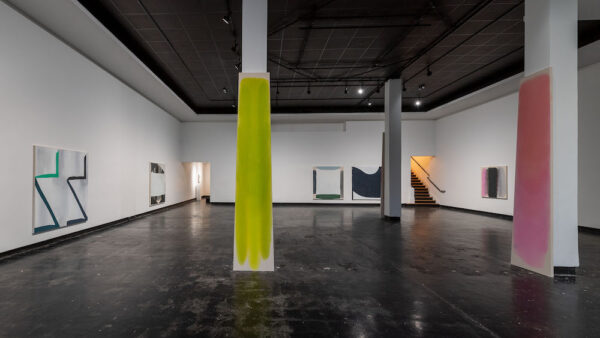 Art in the time of plague. Not a whole lot of viewing going on. Virtual exhibits lack any real visceral quality. Substance digitized. Fake news. On the flip side, you can bet there’s been a whole lot of art being made… on a global level. Practicing artists are hermit-like, sensing a change in the wind, and hunkering down to turn it into material is par for the course. Marcelyn McNeil’s show Good Day Bad Day, on view at Lawndale in Houston through the end of the year and into January, can be seen as an encapsulation of this meditative advantage. The elegant and understated works display a pride of composition, both as they commingle with one another in the large gallery but also as they form a dialog with art making and exhibiting today.

There are a dozen works in the show, but the space is large with a double-story height allowing for ample breathing room. Lawndale’s prominent columns (which can present a real challenge to curation) are deftly handled here by McNeil’s placement of three large, elongated trapezoidal-shaped canvasses, each titled Post and Beam, which lean at a slight angle against the structure, resting on the floor. The surfaces are monochromatic pours of pigment a la Frankenthaler, an obvious influence. The hues on these larger-than-life sized works are pastel and bright, referencing more of a spiritual spritz than pour, which is a good thing. A slight and subtle tweak in process perhaps, but a graceful invention in McNeil’s hands. They are both awkward and measured, a fitting mood for the current zeitgeist. 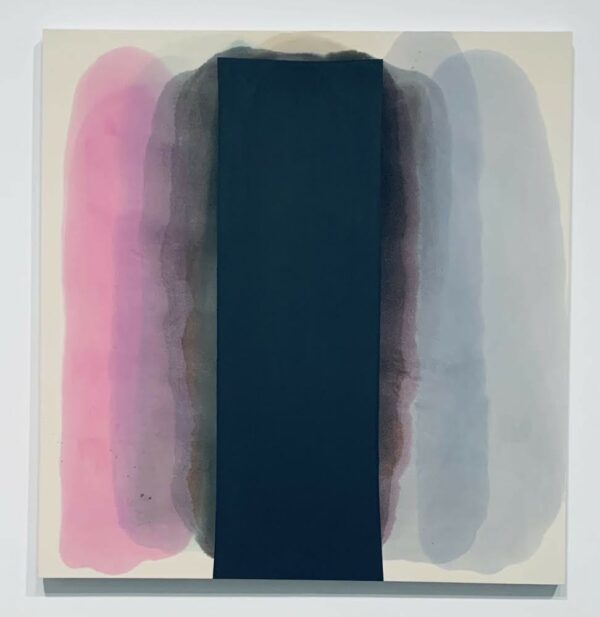 Several other paintings in the exhibition are of a more staid proportion, but pack a similar punch. In Introvert, McNeil employs the pour process integrated with soft triangulations of opacity, all rendered in cool hues. The effect is odd at first — one asks how can these two languages harmonize? More observed, they present a logic of integration that feels arrived at, rather than forced. The borders of the canvas are laid bare, which is another subtle but momentous choice, echoing modernist masters without getting mired in a trope. A similar juxtoposition of stain/opacity is on display in Soak, a real show stopper. In it an unlikely protagonist, a black opaque rectangle that intrudes or exudes poured stains of soft pastels radiating outwards. The rectangle is allowed to connect with the border of the canvas at the bottom, which breaks the proverbial fourth wall… what should be an disjunct in narrative continuity instead, quite gently, almost softly, tightens the script, as it were. A small move creates a big tension and the unassuming quality of the pictorial choice nags like a unresolved slight. 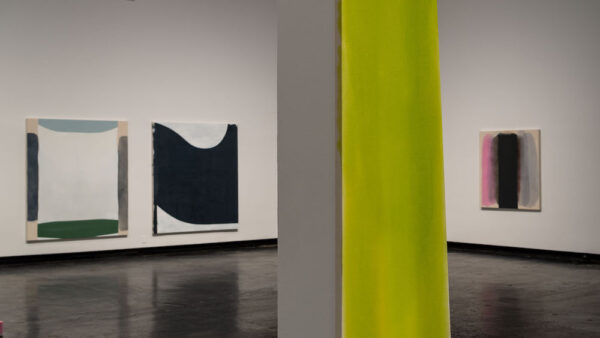 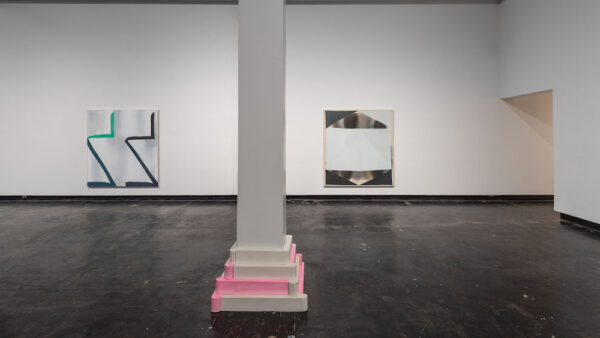 Another addition in the show includes plaster casts of horizontal beam forms, each with a beveled side stacked around the one column without a canvas resting against it. The work, titled Faux Footer, cascades around the base, wedding cake-like, alternating in cream and pink. The archtectonic roots of McNeil’s titles are a clever turn. Her minimalism is one born of Tuttle, rather than Newman, and the confluence of understatement and structural references belies a strength in subterfuge, like an unsensed yet omnipresent virus lurking in our midst.