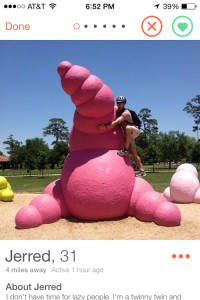 For Houston artist Sally Glass, Tinder is over. She’s “so bored, in fact, that I’d rather make a funny archival project than find a life partner through a smartphone app,” she says in an interview with the Daily Dot about her Tumblr blog, “Tinder Guys Posing with Art.” Glass posted the first of the 54 pics on her blog on April 1, 2014, and her most recent yesterday.

Audra Schroeder, a self-described friend of Glass’ who posted the Daily Dot piece, puts the project in context of “Tinder Girls Posing at LACMA,” which began a couple days later, and features mostly pics of women posing with Chris Burden’s Urban Light, a forest of street lamp poles, and/or Jesus Rafael Soto’s Penetrable. After all, as listicle writer Johnny Debruin commented “Nothing says romance like a bunch of dangling sensory noodles that have probably never been washed.”