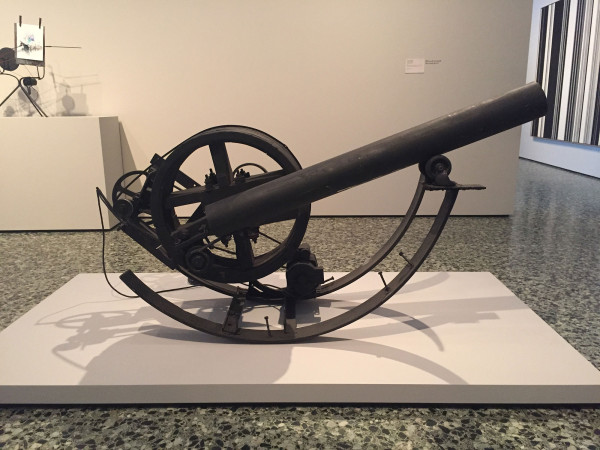 This Jean Tinguely is on currently on view, along with a couple of his smaller automatic drawing machines, at the Museum of Fine Arts Houston. I wondered what it would look like turned on, and turns out it would look… turned on, according to MFAH curator Alison de Lima Greene. She described it as “rather rude,” saying “shall we say it thrusts forward and back with a cannon-like projection.”

Sadly, the Tinguely currently isn’t running, nor does the MFAH have any video of it in operation. Greene told me it’s extremely loud and “clattering.” They do however have video of another, smaller Bascule by Tinguely in operation, and it features an earnest thrusting motion (and some noise):

This piece got me thinking about another mechanical sculpture, Chris Burden’s Big Wheel, which was in the artist’s 2013 retrospective at the New Museum.

Burden and Tinguely were both interested in war and sex, and they both liked machines. But beyond these obvious similarities, these artworks share the idea of dramatic, yet thwarted and ineffectual power. Both pieces roar and clatter, and both spin in place, going nowhere. Tinguely’s cannon doesn’t work as a weapon, it just loudly and comically thrusts—a dada phallus if there ever was one. Likewise, tethered to its hamster wheel, Burden’s motorcycle can never deliver any Great Escape. If anything, it becomes meditative. After the roaring motorcycle is turned off, the wheel continues to spin quietly for a long time.

It’s interesting to consider how two pieces with such obvious physical similarities make similar points in very different ways. If you think about it, they’re really apples and oranges: Burden’s Big Wheel is hypnotic to watch, and far less literal than the Tinguely. (What came first, Big Wheel‘s abstraction or its simple mechanics?) It’s also far larger, and gives off a whiff of potential menace that’s probably absent in the Tinguely (as Burden himself said, “There’s a part of your mind that knows, geez if [the wheel] ever got loose, if it popped out of that trestle at full speed, probably go right through that door, wouldn’t it?”). I haven’t seen the Tinguely in action, but one imagines a rattling, loud clownishness—a literal “up yours” to World War II, with no sublime humming afterglow. It’s either on or off. Hope the MFAH can turn it on again sometime soon.

It feels like a grim century we’re in, but then every century sometimes feels that way. There’s always clamor in our world. Once again I’m glad for the artists who cut through the noise, noisily.