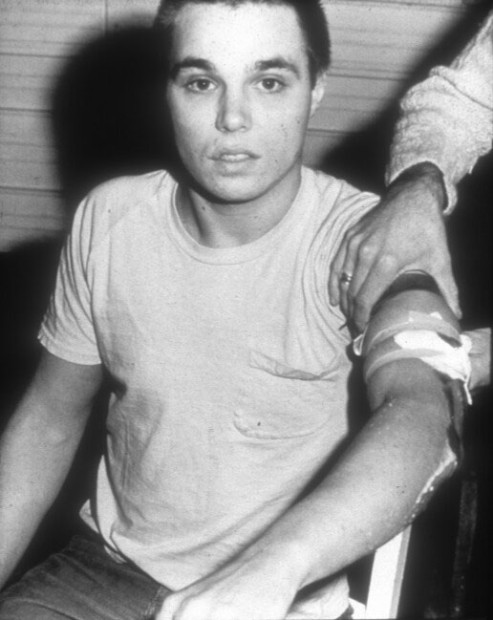 This coming Tuesday, on June 18, 2019 at 7 PM, Glasstire’s Editor-in-Chief Christina Rees will introduce a series of films by and about artist Chris Burden as a part of the Modern Art Museum of Fort Worth’s Tuesday Evenings at the Modern: Films program.

Held in conjunction with the museum’s current exhibition Disappearing – California, c. 1970: Bas Jan Ader, Chris Burden, Jack Goldstein, the program on Tuesday will feature some films that include interviews with Mr. Burden about his works, and some pieces of video art that he created during his lifetime. One thirty-minute film, The Big Wheel, looks at the artist’s creation of a major sculpture by the same name, and another, Willoughby Sharp Videoviews Chris Burden, is an interview from the 1970s that covers such topics as Mr. Burden’s “progression as a performance artist, what America thinks about life as art, and his relationship to his own body.”

A third film, Big Wrench, is a performative piece in which Mr. Burden narrates his doomed love affair with a Ford tractor-trailer truck that he bought in 1977. The final set of films, The TV Commercials 1973-1977, are absurdist commercials that the artist ran on public-access television in the 1970s.

Ms. Rees has written about Mr. Burden’s work before, and upon his death in 2015, noted his radical impact on the art world:

“Chris Burden was—as far as my aesthetic, visceral, and intellectual understanding of art stretches—the most convincing living artist we had going. He frightened some people, and left others cold, but his art qualified the existence of a new kind of art from 1971 onward: When your own California art professors are reluctant to give you your MFA because what you do scares the daylights out of them, then you might be onto something.”

For more on The Modern’s film program, please go here.