Miguel Angel Ríos’ current exhibition, Folding Borders at Sicardi Gallery in Houston should not be missed. Ríos’ pleated/folded maps and cut-paper works poetically and playfully address contemporary and past issues of conflict/violence and territorial struggle. He cartoonishly foreshortens and multiplies gun barrels to allude to the current Mexican drug violence, and in other works he abstracts historical maps. Born in Argentina, Ríos currently divides his time between New York and Mexico. In the diptych, META, 2012, the introductory work to the exhibition, Ríos shows himself yelling into what look like coiled paper megaphones or visual representations of concentric sound waves. It is an appropriate start to a body of work that feels like a personal reckoning with an immensely complex, globalized world that has been taking shape long before the Internet with its roots in Columbus’ ships and colonialism. 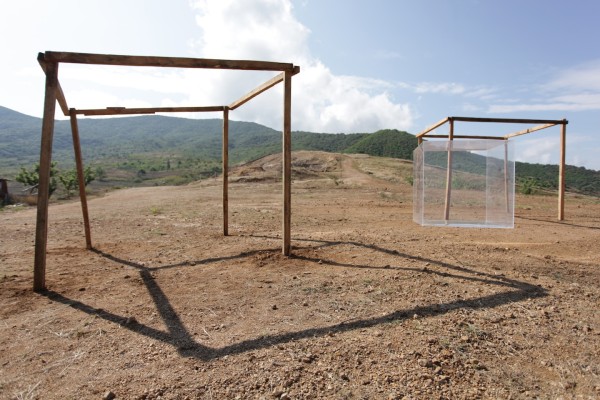 Miguel Angel Ríos, Untitled (from the series The Ghost of Modernity), 2012. One channel wall projection, 3:11 min. Courtesy of the artist and Sicardi Gallery.

In the upstairs gallery space are three poignant, short videos that are the most powerful part of the exhibition. Untitled (from the series The Ghost of Modernity), 2012, is set in the Mexican desert and begins with the camera pulling away to show three simple, empty wood frames that give the bare bones suggestion of a geometric structure or dwelling. As the camera moves, a Plexiglas cube slowly and magically floats into the picture. The desert light casts long skinny shadows of the narrow wood beams. The box’s diaphanous glare and shadow changes as it hovers in and out of each wooden structure. The movement and rhythm of the camera and the subtle soundtrack composed by John Cage in the late 1960s ebbs and flows with different intensity as the box surveys the scene like an omniscient entity. The camera, which appears to be handheld, gives the video a pleasing, rough quality, avoiding the feeling of slick, special effects, as it bounces and cuts in and out of different vantage points. Sometimes the whole clear cube is seen and at other times the cube is shown up close as the scenery around it is bent, distorted, and framed through the box’s Plexiglass sides. Ríos asks: “Is this ghostly geometric figure a lens through which the world can be reinterpreted? Or is it the paradigmatic principle of modernist thought that organizes the world around it? Are we inside or outside the cube?” The video is so oddly beautiful, enigmatic, and inexplicable that the questions remain open. 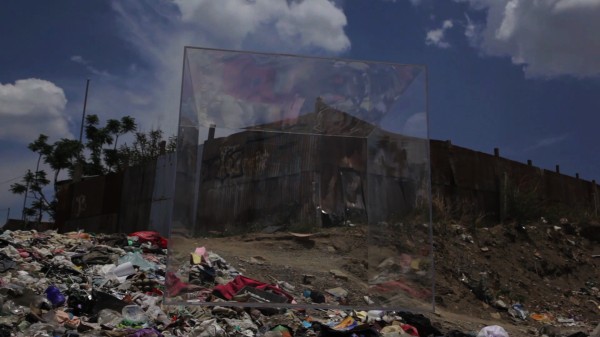 Miguel Angel Ríos, The Ghost of Modernity, lixiviados, 2012. One channel wall projection, 5:03 minutes. Courtesy of the artist and Sicardi Gallery.

In a video from the same series, titled The Ghost of Modernity, lixiviados, 2012, other elements are added to this basic premise as the setting slightly changes. Taking place in a garbage dump full of vultures, the video begins with the visceral sound of a buzzing fly. Shanty houses mysteriously drop from the desert sky and land on the rocky, barren ground with loud thuds and the jangling of corrugated metal. The Plexiglas cube once again floats into the scene. Instead of a musical soundtrack, red flags on the houses are heard flapping in the wind and the sound of an ominous flock of vultures are heard and seen taking off and circling. The vultures’ relationship to the garbage and human waste brings into question the clean cube’s relationship to its surrounding as one of pernicious symbiosis. The modernist quest for pure form and sterile order is set against waste and inequality. As if they are clearing a path, anonymous people furiously sweep the ground with straw brooms as the box almost lands like a hovering helicopter, yet remains “clean” and detached from its surroundings. 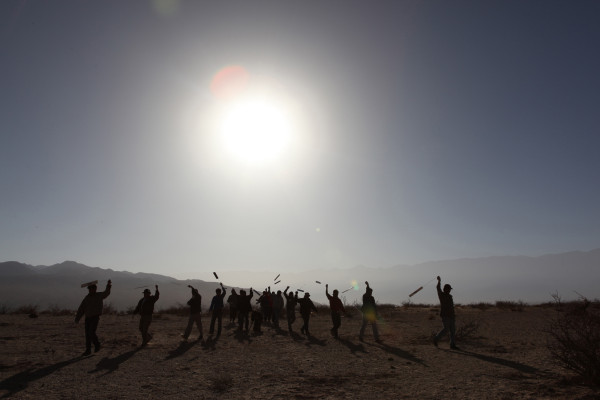 The final video in the program is ROOOM ROOOM, named after a childhood game and filmed in the Calchaquíes Valley at the foot of the Andes, near Ríos’ hometown in Northern Argentina. Standing in a single file line, Ríos’ actual childhood friends are shown playing the simple game that consists of spinning a cord attached to a small wooden tablet (imagine a string with a ruler on its end). The rapid spinning creates a sound that reverberates throughout the valley like a massive echo chamber. For the video, each wooden tablet is wrapped in aluminum foil and marked with a date on which a city experienced a terrorist attack. The figures are not shown directly, but instead by the silhouette of their shadows. The sound of the spinning toys creates a sinister noise like a buzzing chainsaw. Ríos explains, “As children we used to feel empowered as if capable of terrorizing those adults who were asleep far away … years later [this video project] still carries the same hopes we had as children; to reach those in power and wake them up.”

The vivid sound, attention to rhythm and movement, and mysterious beauty of all three videos “woke” me up and captivated me before even exploring their conceptual and political ramifications. Walking into a darkened video space, two questions often pop into my mind: 1) when will something happen? 2) if nothing happens, how long is this video? Neither question even crossed my mind as Ríos’ poetic statements unfolded.

Folding Borders is on view until November 2, 2013.