Keith Carter: From Uncertain to Blue at PDNB Gallery 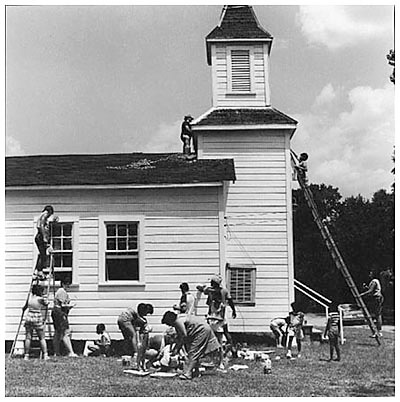 PDNB (Photographs Do Not Bend) Gallery isn’t letting a few decades sideline its taste in contemporary photography. Keith Carter: From Uncertain to Blue revisits Carter’s eye on the common folk of small town Texas in the 1980s. While Carter is certainly a respected name in the field, the exhibition lacks the improvisational spirit, potency, and range found in more recent projects I’ve seen on similar ground (work by Laura Wilson and Allison V. Smith respectively spring to mind, and that’s without even leaving Dallas city limits). 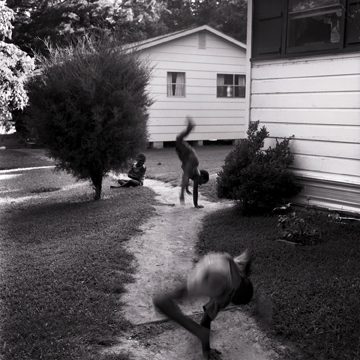 Each of From Uncertain to Blue‘s photos is named for the town where it was shot. These destinations were seemingly chosen only for having an interesting, folksy name — Paradise, Oatmeal, Industry, Pep, Air, Earth, Birthright, Looneyville, etc., so Carter’s black and white photographs are aiming to capture the strength and the value of an average Texas town as embodied by those towns boasting a curious name. Or something like that.

Too many of the 47 works in the show are composed with subject dead center. Ten post-eighties photos are included among the 47; you shall know them by their fuzzy edges. I grew bored quickly and wondered how a photographer of such reputation built a career on such repetition, then wondered if I am simply spoiled by the aforementioned Dallas photographers (two among many gifted shooters statewide).  The show seems to say “Texans – they are characters!” The photographs are available as a coffee table book, also titled From Uncertain to Blue, with a foreword by Horton Foote, who liked to write plays and screenplays that seemed to say “Texans – they are characters!” 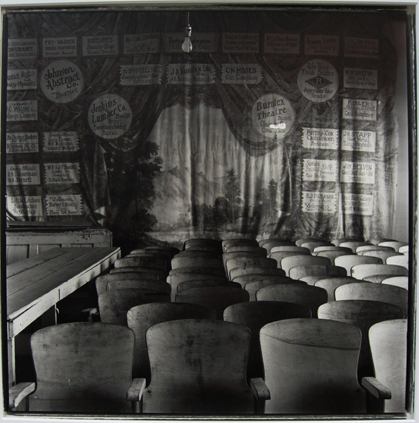 The best of the bunch is Garlic (1991) which breaks from all of Carter’s habits of which I now complain, but it is hidden behind some sort of poster board science project display that’s part of another exhibition called Pictures of Me (I think it’s gallery owner Burt Finger’s homage to himself. Or maybe a self-parody? I don’t care, plus that show will have closed by the time you’re reading this.). At $5000, Garlic is by far the most expensive piece in the show. Why is the strongest (and potentially most lucrative) photograph in the exhibition annulled by weak placement in a commercial gallery? Curious.

Keith Carter: From Uncertain to Blue runs through February 11, 2012, at PDNB Gallery in Dallas.

All images are copyrighted Keith Carter 2011.

Betsy Lewis is a Dallas writer who enjoys a small town Dairy Queen.

LGBT Pride at CentralTrak: Some Pictures and a...

Thank God somebody said this about Keith. I went to Lamar and he was one of my professors. At the time, I remember being enamored of his work. As the years passed, however, I began to see through the shallow pandering of his selective lens. The words cliche-ridden and silly come to mind when I think of his work now. One kind of funny thing that used to happen in his class was that he would read us lines from famous works of literature, then we would have to interpret that through photography. The thing was, though, he only quoted the first lines of books, as if he never made it through the whole thing. That kinda sums up Keith for me now.

Holding photographs made 25-30 years ago to a “contemporary aesthetic” doesn’t seem exactly fair to me. Carter has certainly done more work since then and if that work is shown and the same criticism is leveled at it, so be it. But anyone working in a similar vein has the advantage of being familiar with Carter’s earlier work. I suppose Atget or Gordon Parks looks pretty dated too, lacking “potency and range” compared to new work by other photographers. The work exists in a context. And I’m just downright puzzled by comments like “Too many of the 47 works in the show are composed with subject dead center.” Unless we are tired of the Bechers, Avedon’s American West, August Sander, Rineke Dijkstra, Tina Barney, Todd Hido, William Christenberry, ……

I found the work elegant in its simplicity. Nothing about it felt overwrought or contrived – a lesson some could learn from Keith. I’m not sure why the reviewer insists that the work feel “improvisational,” but I disagree that it lacks potency. Perhaps the potency the reviewer seeks was missed while looking for something beyond its simple elegance.

If that’s all you get out of Horton Foote’s writing, then I think you haven’t really paid much attention to his work, which leads me to wonder how much you’ve actually paid to Keith Carter’s. Yes, Foote focused on Texans, but that was because of his own heritage and because of the profound depth of character and drama he found in their lives. He chose to express it very simply, without the flashy oratory or outbursts of violence of so much other modern drama, but that doesn’t mean it lacks for poetry or potency. You have to listen for it, to tune into it onto its own wavelength. When you do, you can hear a richness of history, of heritage, of community, of sorrow and perseverance.

I think that’s something Carter shares with Foote and may be one of the reasons that Foote so admired Carterer’s work and vice versa. Both men approached their art from a deep attachment to place, to Texas and its smaller communities and people, and they sought to bring that out in a quiet way that reflected their personal experience. I can understand how someone could be “bored quickly” by either man’s work, but you shouldn’t confuse your boredom as a viewer with a lack of depth or artistry on the creator’s part. As someone who grew up in Southeast Texas like both these men, I find their work to be not only potent but perceptive and true.

WHAT IS REALLY LACKING HERE IS RELEVANT ART CRITICISM…. LACK OF HISTORICAL PERSPECTIVE AND A TOTALLY VISCERAL VIEW OF ART DOES NOT MAKE A WORTHWHILE CRITIC.

BEING CRITICAL OF THE PLACEMENT OF “GARLIC’ BECAUSE IT IS THE MOST EXPENSIVE PIECE IN THE EXHIBITION AND SHOULD BE IN A BETTER LOCATION IN ORDER TO SELL IT JUST PROVES A POINT.. WE MAY BE A COMMERCIAL GALLERY BUT MANY TIMES IT IS MORE ABOUT CREATING A SHOW WE ARE PROUD OF THEN PLANNING ON WHERE TO PUT A PIECE BECAUSE IT MIGHT BE MORE SELLABLE….BETSY… I THINK YOU MISSED THE REAL EXHIBITION. COME BY FOR THE TOUR

President Obama happens to own a print of “Garlic” which is in his Chicago Home.

Personally, I’ve always been confused about what brings something out of cliche’ and into archetype?

Is it the point where we go from basic recognition of something we’ve seen before, and begin to be bored with it, and then it passes away from the popular and comes back as a slightly remembered thing that makes us go, “Yes!”

Betsy, I think to use commentary like “Too many of the 47 works in the show are composed with subject dead center.” it sounds like you’ve taken A PHOTOGRAPHY class and learned the golden mean but not that every good photographer who develops a their style will eventually learn to break the rules gracefully. It truly just sounds like you are jealous that galleries aren’t showing more of your aforementioned lady photographers.

I will admit that Keith showed great interest in Laura Wilson’s book Avadon at Work when I brought it to his class one day. He borrowed it and sincerely wanted it as part of his reference library when I reclaimed it.

Perhaps galleries should be showing more of Laura, but I would think that it would be highly dependent on if she has been marketing herself MORE as an ARTIST or an EDITORIAL photographer for most of her career.

For your information, typing in all caps on the internet is generally considered impolite.

Jason,
thanks for thw informition… I,m an older person and my vision is not so hot… All caps are much easier tosea… Helps mi not mak so many typos..
I wil try to be more polite in the future.
Burt

I have to say that this is a truly peculiar review, especially coming from Glasstire. The astonishing lack of awareness of the place Keith Carter occupies in the contemporary Texas art-world, the bizarre comparison to such disparate talents as Smith and Wilson, and the truly pedestrian notion that better selling works require more prominent placement are befuddling at best, profoundly (and evidently smugly) ignorant at worst.

While I am no fan of Carter’s recent work, no one can deny that his early images (of which Uncertain to Blue is primarily composed) resonate with a direct connection, empathy and dignity towards Carter’s subjects that I find both elegant and honest. His aesthetic (that at its best seems akin to Diane Arbus channeling Eudora Welty)influenced a whole generation of Texas-based photographic artists, including Allison Smith.

I understand that a blog posting, by nature, supposes a more informal tone, but it would benefit Lewis to be more cognizant of the background and context surrounding an exhibit before approaching a subject.

[…] From Uncertain to Blue” features Carter’s photos of small Texas towns. And in her glasstire.com review, our ol’ Art&Seek pal Betsy Lewis was less than impressed. “While Carter is […]