This is the first piece of a multi-part series on Venice, written during the author’s month-long residency and personal hiatus in the city. 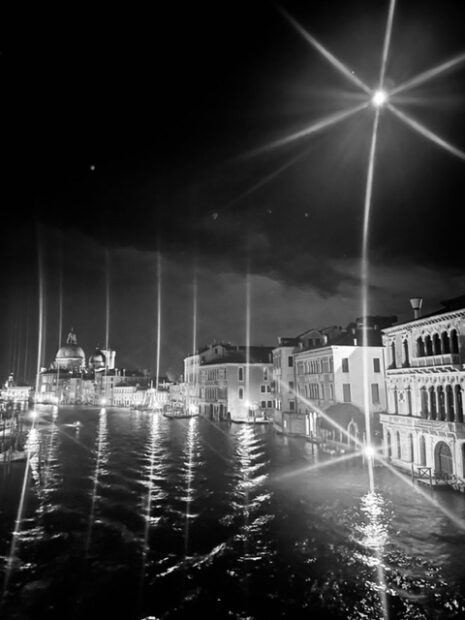 Photo of Venice at night. Image by Pilar Goutas.

No one can truly prepare you for Venice. It’s a place unlike anywhere, a place that is constantly fighting against its own maniacal decline, and as such it shouldn’t exist.

We landed late, discombobulated from the nearly 24 hours of airplanes and airports. We had left Mexico City in the early evening and somehow landed in Venice exactly one day into the future, a time zone marvel I still can’t fully comprehend. We were tired, our eyes bloodshot, and our vision blurred. We had a mountain of suitcases all filled with art for an upcoming exhibition — our real reason for traveling to Venice — and we craved nothing but fresh air and a breeze.

I have seen images of Venice most of my life. I remember the sound of a slideshow of the city in my high school art history classes, images popping up one kerchunk at a time. I remember my amazement at the marble, the stone, the adornment of churches, the ornate detail of the Saint Mark’s Cathedral. I remember envisioning myself standing there  alone in the empty plaza, the sounds of the birds fluttering around me, echoing from one facade to another. But remote experiences were not enough to brace me for the city itself. 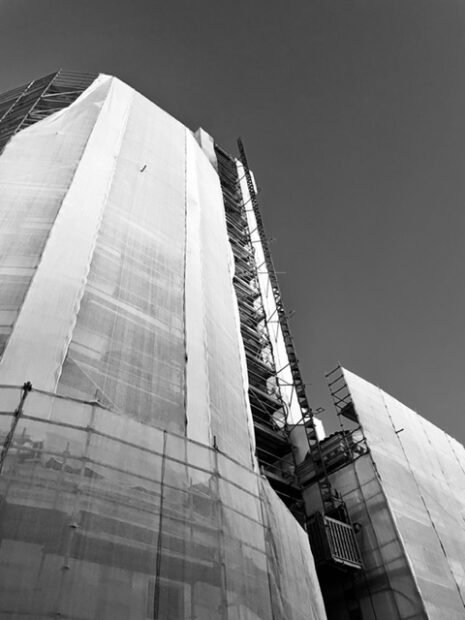 Scaffolding and tarps covering a building in Venice. Photo by Pilar Goutas.

It wasn’t necessarily the architecture or the art that came as a shock. It was the water. The water is everywhere and defines every single inch of the many tiny islands making up the City of Venice. It laps up against the sidewalks and spills over the ancient cobblestone like fingers reaching for architecture. It moves the island, which sways softly to and fro, like a boat bobbing in the ocean. It hangs so heavy in the atmosphere that it changes the tone of the light, romantically diffusing and blurring everything in the distance.

I was traveling with artists Mike Counahand and Pilar Goutas with the crazy and ambitious idea of installing and opening an exhibition of 25 artists from Mexico City who have passed through Mike’s studio over the years. He has diligently collaborated with artists to teach and diffuse the ancient technique of heliogravure, one of the original methods of printing photography, dating from the early 19th century. Mike is one of few artists in the Americas working to actively resuscitate the technique, which is a mix of printmaking and photography that renders the final image with a touch of something ancient and antique, really special. It is also a technique dependent on light — as all photography is — making our show a story of light. 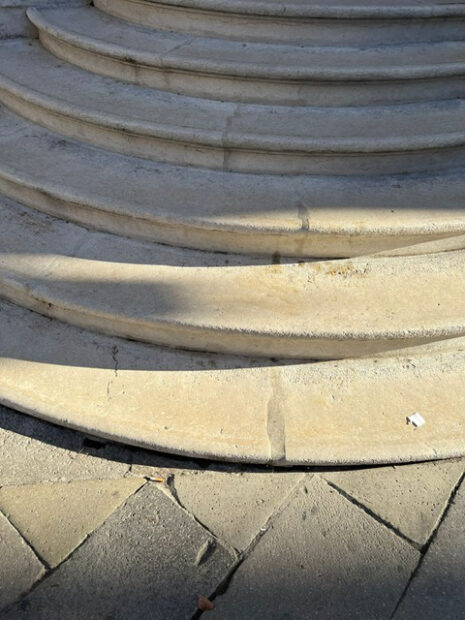 Light on steps in Venice, photo by Mike Counahan.

The three of us decided to close shop in Mexico City, pack up our lives for six weeks, and temporarily move to Venice with the work in the show. It was perhaps the change of context that none of us realized we needed, at exactly the right time.

Through my years of travel I have learned the context of understanding where one is going is always dependent upon where one is coming from. In the month leading up to leaving for Venice, I was in Philadelphia, Austin, and Mexico City, and was barely able to muster the energy to leave my home…wherever it was. I had just experienced a heartbreak so surprising and shocking that my entire core was in pain. Every joint ached and groaned and I felt nothing but exhaustion. There is a certain dryness to heartbreak, and every flex of creativity left me even more shriveled and drained. Getting out of bed felt like descending from a mountain, and prepping my life to get on the plane to Europe was an impossible task. But water offers life, and in Venice there is a revitalization and love for living that comes along with its ecological precarity. 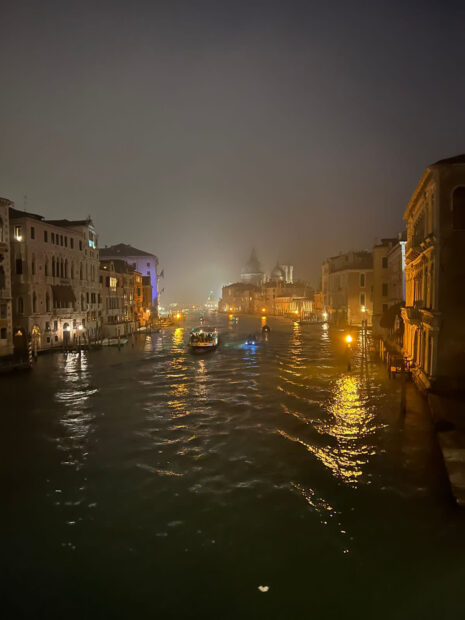 The Grand Canal of Venice at night. Photo by Mike Counahan.

We piled our luggage onto the taxi — a boat that took us around the entire island to the area of Dorsoduro. The first part of our plan involved dropping our suitcases directly at the gallery space before checking into our apartment. As we circumnavigated the city, Venice began to settle into our skin. Night had fallen by the time we exited the airport, but the darkness was penetrated by lights glittering along the shore. But it wasn’t just a shoreline, it was the city itself, and those same lights danced through the waves, over the current, and across the expanse of black water. There is no shore here. It is simply water, then land, and the two crash into each other like elements fighting for place. It is the ancient story of nature versus humanity, and the constant cycle of repairing a semi-crumbling city. Venice literally rises from the water, resting atop it like towers made of sand, an aberration against gravity, against the salt air and humidity of the ocean that wants to consume everything.

As our taxi traveled around the circumference of the island I could see the narrow passageways of winding streets connected by bridges. There is a surprise to every twist and turn, a disorientation inspired by the lack of direction, and a slight sense of vertigo roused by the sway of the current.

To say I was dizzy is an understatement. I felt like I was being rebuilt from the inside out, from my foundation up. I was, somehow, being saved by a show in a place in which I never imagined I would be. And after so many months of dryness, I welcomed the wet breeze and allowed the excitement to set it.

But above everything, it was the water and the glimmering light that bounced from it that made my first impression of the city truly spectacular.

Thank you to Katyna for welcoming us and feeding us as soon as we touched down. Thank you to Mike for so much patience with me while en route and generally through this entire process. To Luca, Elena, and Francesca of the Venice Art Factory, thank you for the incredible help and support on this gorgeous exhibition, as well as to Memo and Alfredo in Mexico City for all the ways you both prepared us to be here. Thank you to every single artist involved for your trust, and especially Maripili for both the trust and confidence, and what is the beginning of a lifelong friendship (because now you’re stuck with me).

Venice: Light and the Biennale