“This is Ukraine: Defending Freedom” at the Scuola Grande della Misericordia in Venice, Italy 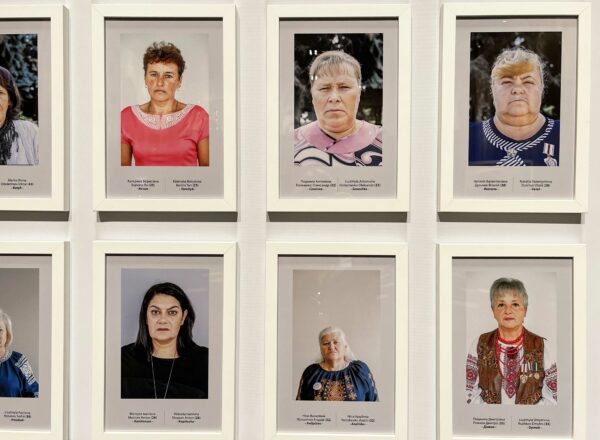 Detail of “Mothers Series,” a project by Mirror Weekly 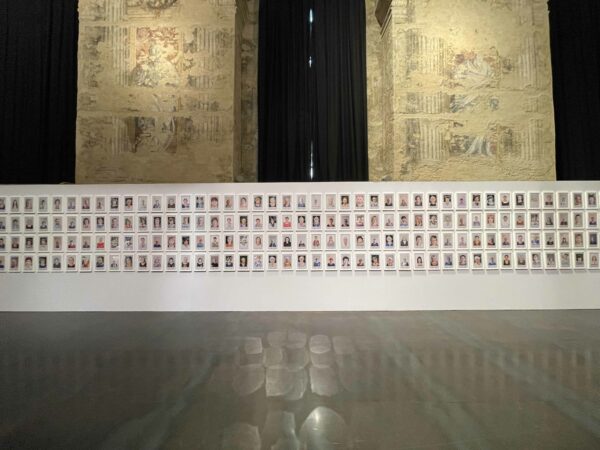 Bjorn Geldhof, Curator and Director of the Pinchuk Art Centre in Kiev, Ukraine, approached the exhibition This is Ukraine: Defending Freedom from two perspectives. The first part presents works from three artists who continue to live and work in the Ukraine during the current Russian invasion, bombings, and war. The second part presents big name international contemporary artists whose works challenge us to form a collective voice supporting Ukraine. The fact that the exhibit is held in conjunction with this year’s Venice Biennale and housed in a 1310 historical building that focused on charitable work (the Scuola Grande) adds an additional layer of context and meaning to the message of urgency presented in the artists’ works. 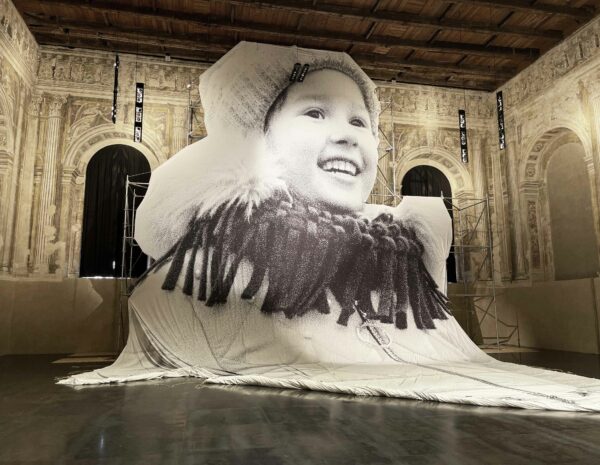 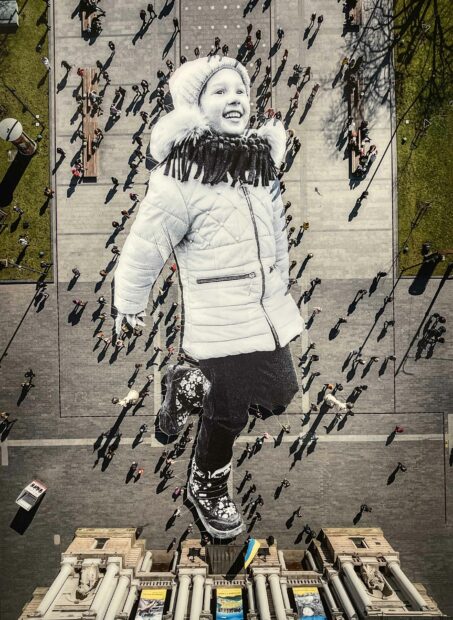 Writer and artist Yevgenia Belorusets exhibits her daily diary, including photographs, for the first 40 days of the war. Desks are set up around the interior perimeter of the space for visitors to sit and read. Despite the crowds and noise, I felt compelled to read all 40 entries, as the artist relates her experiences of shock, outrage, anger, and despair as the war escalates. She writes about how she expected it to last only a few days and how the fear of the unknown became overwhelming. None of the images show violence or conflict. Rather, they highlight the resilience of the Ukrainian people when the simple act of taking a photograph can be considered a war crime. One excerpt from Belorusets’ diary says, “Pictures can be dangerous. They can reveal things without intending to. They transform the city into a military object just by existing, even though the documentation of one’s life through photos has become a modern habit that can help us process pain, fear and danger.” 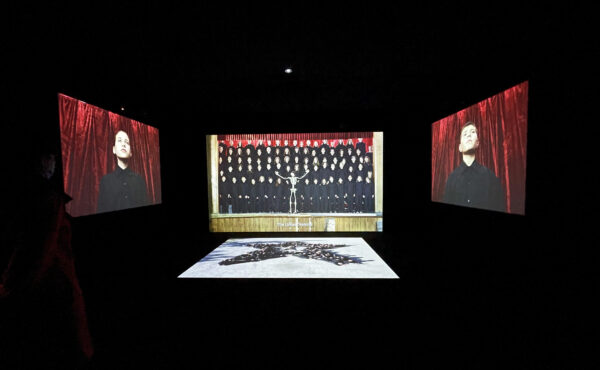 Belorusets’ diaries have been published in Artforum and by publisher ISOLARII online. The first-person narrative humanizes the war in a way that news coverage cannot. This act is one of great courage. Despite her fear and struggles to survive, Belorusets realized the importance of documenting these events, so that there would be a record for us all. 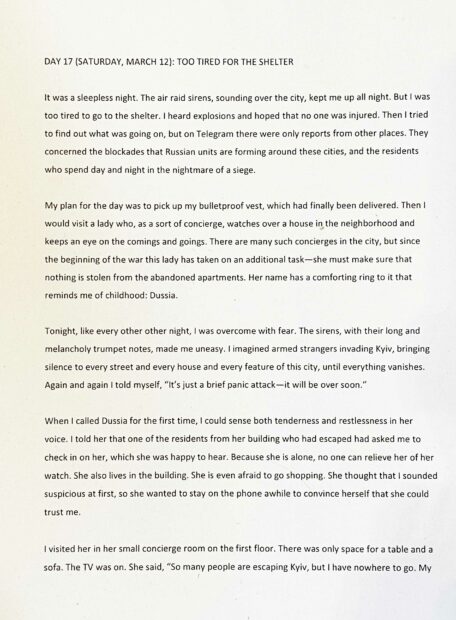 Installed next to large columns in the Scuola Grande, Lesia Khomenko’s paintings feature larger than life-size portraits of ordinary men who became soldiers fighting for Ukraine’s freedom. Khomenko made the first painting in March of her artist and musician husband Max after the February 24th invasion by Russia. The haunting series is a poignant reminder of how life changed in a single day for Ukrainian citizens. Khomenko’s paintings do not allow us to look away or ignore their stories. Instead, they proclaim, “This is what defending freedom looks like.” 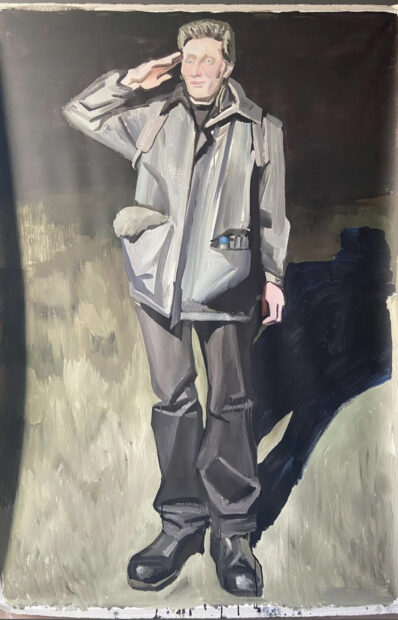 Lesia Khomenko, “Max in the Army,” 2022, copy of the work from her Instagram

Nikita Kadan, whose work was included in the 2015 Venice and Istanbul Biennales, creates sculptural installations that speak to the legacy of political violence. The work on display includes assemblages of bombed out metal fragments from both the 2014 Donbas conflict and the recent war. In a recent interview, he speaks about his work in the Western Ukrainian city Ivano-Frankivsk, where he helps to transport art and objects of cultural heritage out of the country. Like many artists working in a war zone, his work blurs the line between art and activism. Kadan states, “To be a conscious citizen means to be a social-political activist now.”

Displayed on the far wall of the Scuola are three hundred portraits of mothers who lost a son in the Russo-Ukrainian War from 2014-2015. Each portrait is signed with the name of a mother and her son, and a pet name she called him as a child. These haunting photographs give a voice to those that the Russian government seeks to silence; their faces show the pain and loss. The project pays tribute to the young soldiers who died defending their country. It is a powerful reminder of how history repeats itself, and gives faces to what continues to happen today. The Mother Series includes a number of photographers: Hanna Hrabarska, Hanna Zolotniuk, Oksana Kanivets, Yevhenii Kershkov, Maxym Kozmemko, Oleksandr Kornyakov, Inna Liudvyk, Anton Malynovskyi, Valeriy Miloserdov, Mustafa Nayyem, Vickor Stadnyk, Oleksandr Techynskyi. 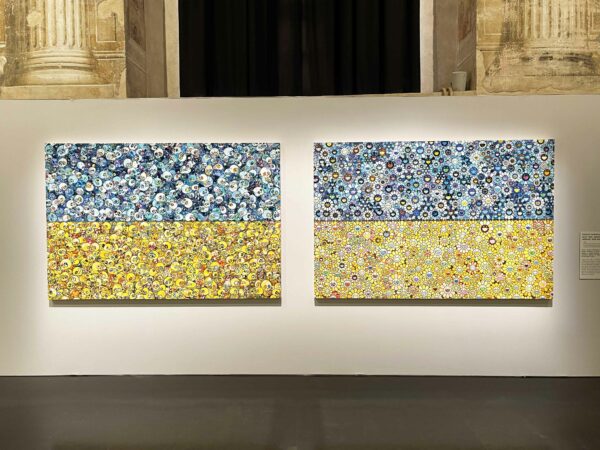 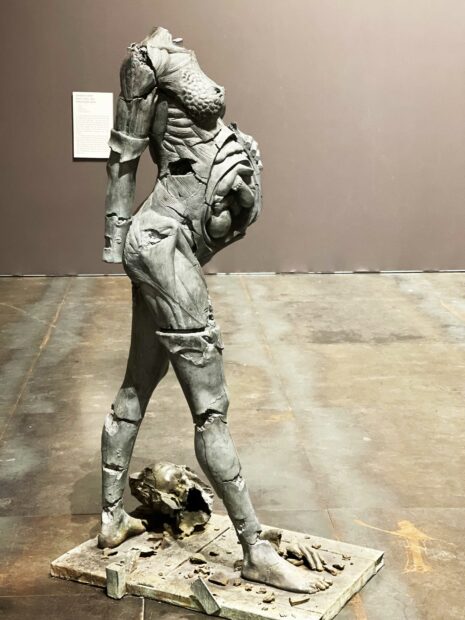 In addition to the Ukrainian artists, there is work by Takashi Murakami, Damien Hirst, Marina Abramovic, Olafur Eliasson and J.R. With the exception of J.R.’s work Valeriia, which features the image of a five-year old girl who was one of 4 million Ukranian children forced to flee their homes, none of the other artists’ work specifically relates to the current crisis in Ukraine. I admire J.R.’s piece and his commitment to large-scale public art and activism. He consistently uses his art and agency for global awareness. 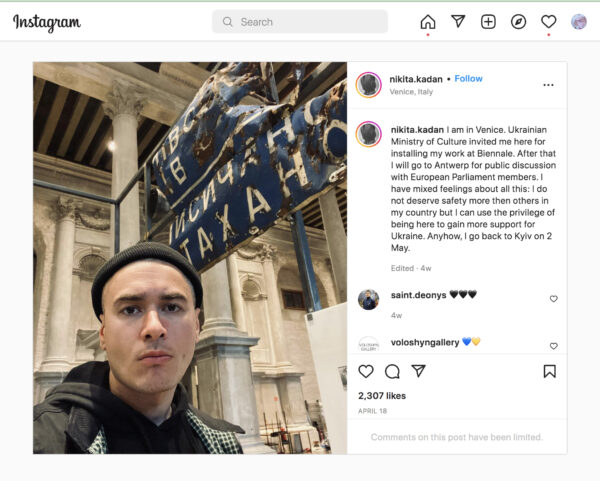 I confess to feeling very conflicted about the use of brand name celebrity artists in this exhibit. I can’t help but feel that it does a disservice to the Ukrainian artists, who are living through this nightmare, while still managing to make work and have their voices heard. I hope that visitors will spend the time with the work and attempt to understand three artists’ immediate responses to the war, rather than popping in and out for a glimpse of their fave celeb artist’s work. One obvious benefit from this collaboration is that having the art stars’ names on the roster, as well as having their participation in the exhibition, has the potential to significantly raise awareness and (hopefully) provide support and much-needed funds for Ukraine. 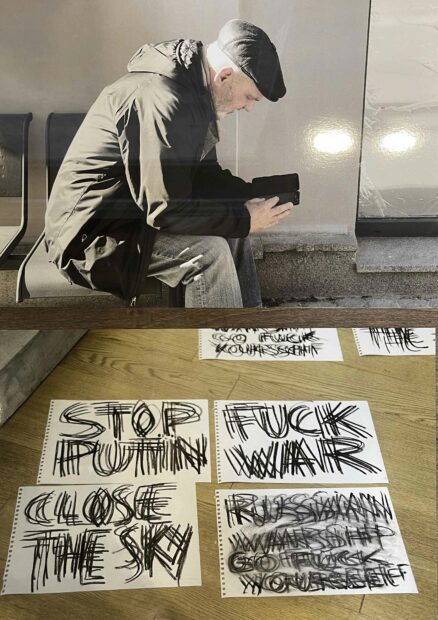 This is Ukraine: Defending Freedom, organized by the Pinchuk Art Centre, Kiev, is on view from April 21 -August 7, 2022 at the Scuola Grande della Misericordia in Venice, Italy.